Barber served as Chairman of the 2022 Resolutions Committee, while Keahbone, pastor of First Baptist Church Lawton, Okla., helped draft the resolution titled “On Religious Liberty, Forced Conversion, and the Federal Indian Boarding School Initiative Investigative Report,” as part of his work with the Committee.

Barber is the first SBC President to attend Indian Falls Creek Camp, the largest gathering of Christian Native American believers in the world. This year marks the 75th anniversary.  Around 1,400 students are attending the camp this year.

He opened the Twitter Space conversation by speaking to the important role SBC resolutions play.

“Resolutions give the Southern Baptist Convention messenger body the opportunity to speak to issues that they think are important, issues that are central to who we are as Baptists and issues that shape the direction of our ministries,” Barber said.

Barber said he is planning to host a Twitter Space conversation talking about each of the resolutions that were passed during the annual meeting in Anaheim.

Spaces are open for anyone to join and listen in, but only the host controls who can speak in the conversation. Conversations are live, and generally not archived for later listening.

Barber said the resolution was written in response to a recently released federal report documenting the forced assimilation and conversion of Native Americans, Alaska Natives and Native Hawaiians in the U.S. between 1819 and 1969.

The report said Native peoples were specifically targeted with these efforts of forced conversion and assimilation in order to systematically remove them from their native lands.

Much of the efforts took place in the form of mandatory boarding schools for Native children, which were run with the help of various Christian denominations. Southern Baptists are not specially mentioned among the denominations in the report.

The resolution rejects any type of forced conversion or assimilation of Native peoples as antithetical to Southern Baptist beliefs about the Great Commission, religious liberty and soul freedom.

“This resolution says something about our beliefs in our missiology, religious liberty and how we share the gospel with people who need to hear the gospel,” Barber said.

Jennifer Barnett is on the Executive Board for Indian Falls Creek, and joined Barber and Keahbone for the beginning portion of the conversation.

She explained what the passing of the resolution meant to her and all Native peoples.

“To see this resolution passed is the start of something. It’s not the end-all-be-all, but what it does is give us the expectation that more will happen. Last summer we had a time of prayer, and this is the beginning of the answer to those prayers.”

For Keahbone, a Native American with heritage from the Comanche, Kiowa and Cherokee tribes, both the federal report and the resolution were deeply personal.

Some of his family members even attended boarding schools mentioned in the federal report where they suffered mistreatment.

Although the report was difficult to read and process, Keahbone is thrilled with the resounding support the resolution has received from fellow Southern Baptists.

“This resolution is the first time in convention history we have taken a stand with Native peoples,” Keahbone said. “I just shared my heart with the committee and everybody was adamant that this resolution needed to be at the forefront.

“It was such a powerful moment bringing it before the convention for the vote. Approving this resolution sent a historic message across the nation to our Native peoples.”

In early July, Keahbone read the resolution from the platform at a “Road to Healing” tour event. The tour is sponsored by the U.S. Department of the Interior in conjunction with the Federal Indian Boarding School Initiative, which produced the federal report released in May.

The tour is designed to give survivors from the boarding school abuse an opportunity to share their story as part of an intentional effort of healing. The first stop on the tour took place at Riverside Indian School in Anadarko, Okla., where Keahbone read the resolution to attendees.

He is hopeful having the resolution to share with Native peoples of all ages can help make a gospel impact on their road to healing.

“Native Americans know these stories about the boarding schools, and that can be a huge barrier in sharing the gospel with Native peoples because people were doing these things in the name of Christianity,” Keahbone said.

“This resolution begins a conversation of healing that opens the door, where we can say ‘that was wrong, that was something that should have never happened, and we stand against what happened and anything like that or that might happen in the future. We’re going to pray with you and walk with you to start these steps of healing.’ That acknowledgment is huge.” 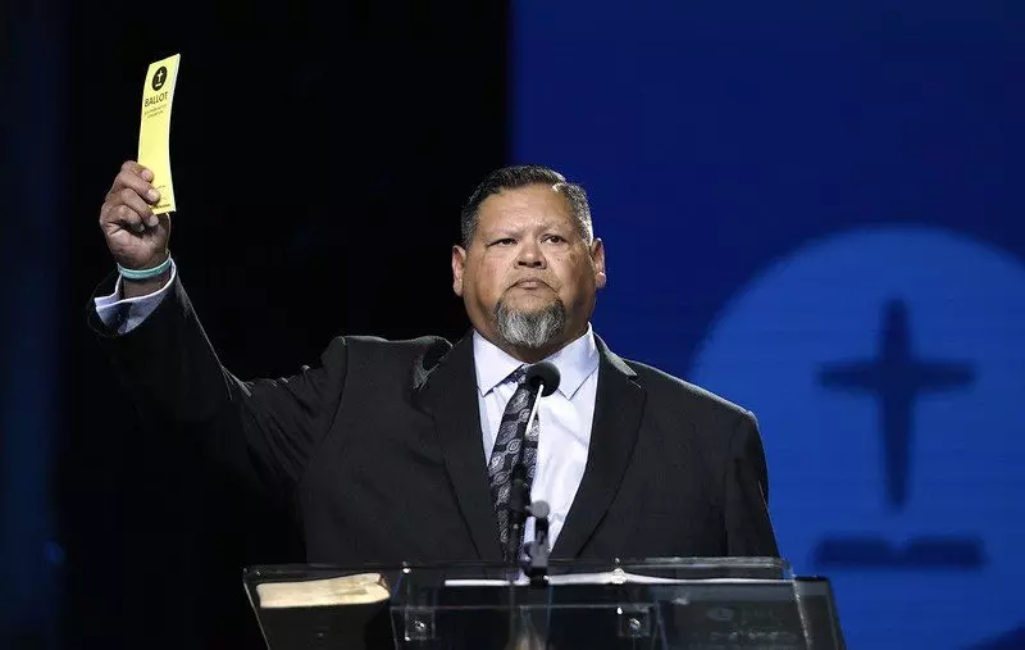