The U.S. Senate confirmed Amy Coney Barrett to the Supreme Court in a nearly party-line vote Oct. 26, and Southern Baptist leaders focused on prayer for the new justice.

The Senate voted 52-48 for confirmation of the federal appeals court judge. Only Sen. Susan Collins, R-Maine, broke from her party, joining with Democrats to oppose the confirmation.

Barrett was given the constitutional oath by Justice Clarence Thomas Monday night at an outdoor ceremony at the White House. Chief Justice John Roberts administered the judicial oath to Barrett Oct. 27.

“A judge declares independence not only from Congress and the president, but also from the private belief that might otherwise move her,” Barrett said during a speech at the Monday night ceremony. “… The rule of law must always control….

“The oath that I have solemnly taken tonight means at its core that I will do my job without any fear or favor, and that I will do so independently of both the political branches and of my own preferences. I love the Constitution and the democratic republic that it establishes, and I will devote myself to preserving it.”

Her remarks echoed those of President Donald Trump, who introduced her at the ceremony. Trump called the Constitution the “ultimate defense of American liberty,” adding, “The faithful application of the law is the cornerstone of our republic. That is why as president I have no more solemn obligation and no greater honor than to appoint Supreme Court justices.”

Addressing the nation’s children, Trump said, “Because of our Constitution and our culture of freedom, you live in a land where anything is possible and where any dream can come true. No matter who you are, no matter your background, in America, everyone is entitled to equal protection under our laws, and your sacred rights can never ever be taken away.”

J.D. Greear, president of the Southern Baptist Convention, opened the Senate in prayer Monday at the invitation of Barry Black, the chamber’s chaplain.

In a tweet before the confirmation vote, Greear expressed his gratitude for the opportunity and said he was praying Barrett, if approved, “will judge w/ righteousness, impartiality, and justice. Praying for continued freedom to preach the gospel and that we the church will steward that well.”

Southern Baptist ethicist and religious freedom leader Russell Moore, who praised her qualifications when she was nominated, encouraged Christians to pray for Barrett now that she has been confirmed.

“Easy questions do not come before” the high court, said Moore, president of the Ethics & Religious Liberty Commission, in a written statement. “Therefore, all of us should pray for Justice Barrett, and for all eight of her now colleagues on the bench, that they would have wisdom and prudence and conviction as they make decisions on big questions that often affect the lives of generations of Americans to come.

“Additionally, we should pray for the Barrett family, and especially her seven children, that the years to come would be for them years of thriving and joy,” he said.

Ronnie Floyd, president of the Southern Baptist Convention Executive Committee, described Barrett as “one of the most gifted legal minds in America today” and said he is “encouraged to see her confirmed by the Senate.”

“As an accomplished jurist and thoughtful originalist, she demonstrated in her confirmation hearings that she is well deserving of a seat on the Supreme Court,” Floyd said.

While Republicans praised Barrett, Democrats criticized her and her nomination.

In a floor speech shortly before the vote, Senate Majority Leader Mitch McConnell, R-Ky., described her as “one of the most brilliant, admired and well-qualified nominees in our lifetime.”

The vote closed another contentious battle over a Trump nominee. Those confirmation fights have also occurred with several other Republican nominees during the last three-plus decades.

Barrett, 48, a judge on the Seventh Circuit Court of Appeals in Chicago, is considered the sixth conservative among the justices, though that labeling has not always resulted in rulings that might be expected on such issues as abortion and religious freedom. She embraces originalism, a judicial philosophy that espouses interpreting the Constitution based on its original meaning and laws according to their text

In addition to concerns about Barrett’s conservative record, much of the Democratic focus in this confirmation struggle was the timing. Democrats strongly objected to Trump’s decision after the Sept. 18 death of Associate Justice Ruth Bader Ginsburg to submit a high court nominee before the Nov. 3 election.

They also criticized the Senate GOP’s decision to hold a confirmation vote, contending such an action should wait until voters have chosen who will be president beginning in January. They charged Republicans with hypocrisy or inconsistency. The GOP leadership had refused to act on President Obama’s nomination of federal appeals court judge Merrick Garland after Associate Justice Antonin Scalia’s death nearly nine months before the 2016 election.

The Judiciary Committee forwarded Barrett’s nomination to the full Senate Oct. 22 in a session that demonstrated the partisan divide over her addition to the Supreme Court. The committee’s 12-member Republican majority voted unanimously to advance the nomination, while all 10 Democrats on the panel boycotted the meeting in protest of what they called a “sham process.”

The Senate had voted 51-48 Oct. 25 to invoke cloture, an act that limited debate and prevented Democrats from filibustering the confirmation vote. Two Republicans – Sen. Lisa Murkowski of Alaska and Collins – joined Democrats in opposition to the GOP majority.

During the Judiciary Committee’s hearing on her nomination, Barrett deflected Democratic attempts to coax her to say how she would rule on such issues as abortion and the 2010 health-care law known as the Affordable Care Act. Americans “of all backgrounds deserve an independent Supreme Court that interprets our Constitution and laws as they are written,” Barrett said. “And I believe I can serve my country by playing that role.”

Barrett clerked in 1998-99 for Scalia, who championed originalism during his 30 years on the high court.

When she was nominated by Trump to the Seventh Circuit in 2017, Barrett faced questioning by Democrats on the Judiciary Committee regarding her Catholic faith. This time, Republican committee members preemptively criticized any attempts to apply a religious test to her.

Barrett becomes the first mother of school-age children to sit on the Supreme Court. A graduate of and former professor at the University of Notre Dame Law School, she also is now the only justice who did not study at Harvard University or Yale University. 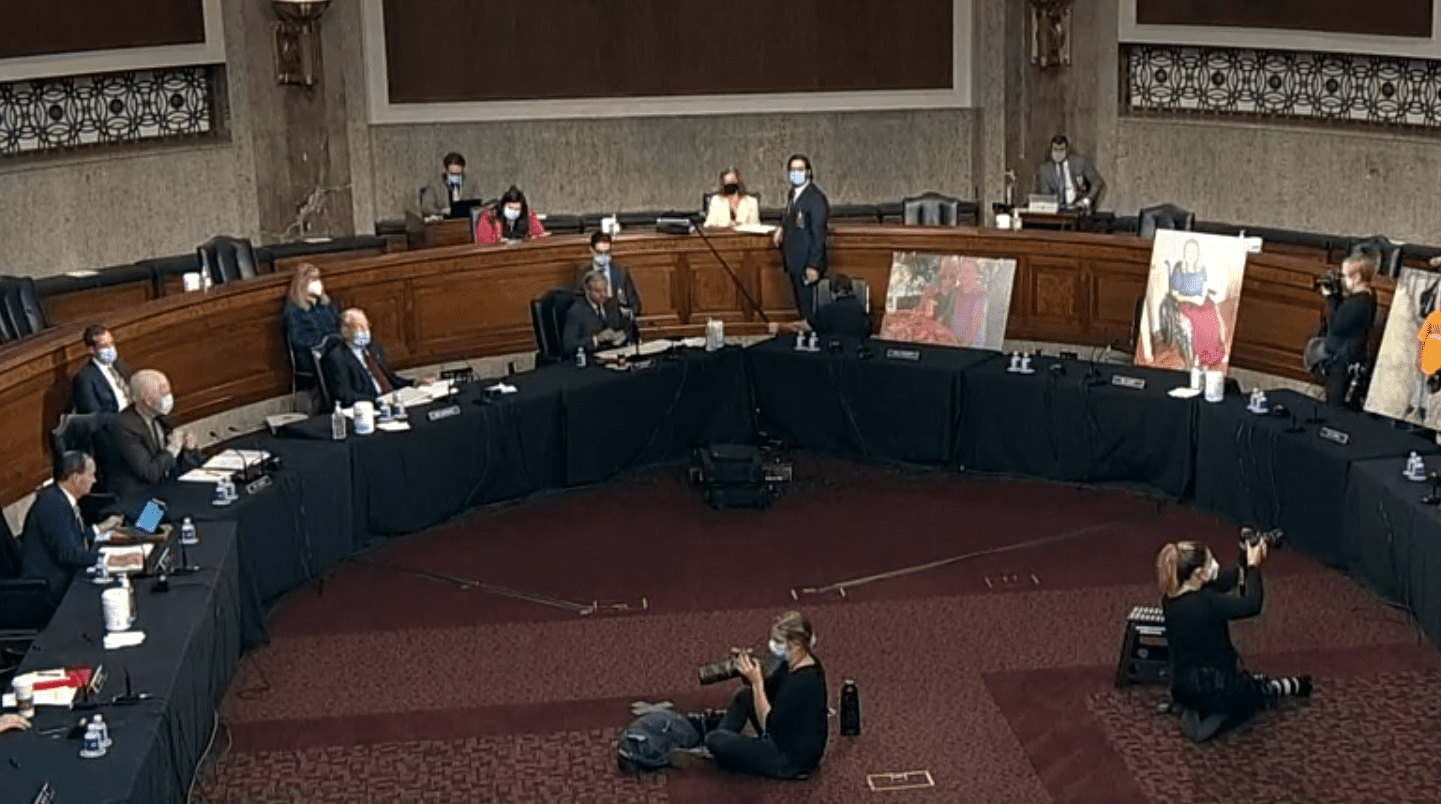 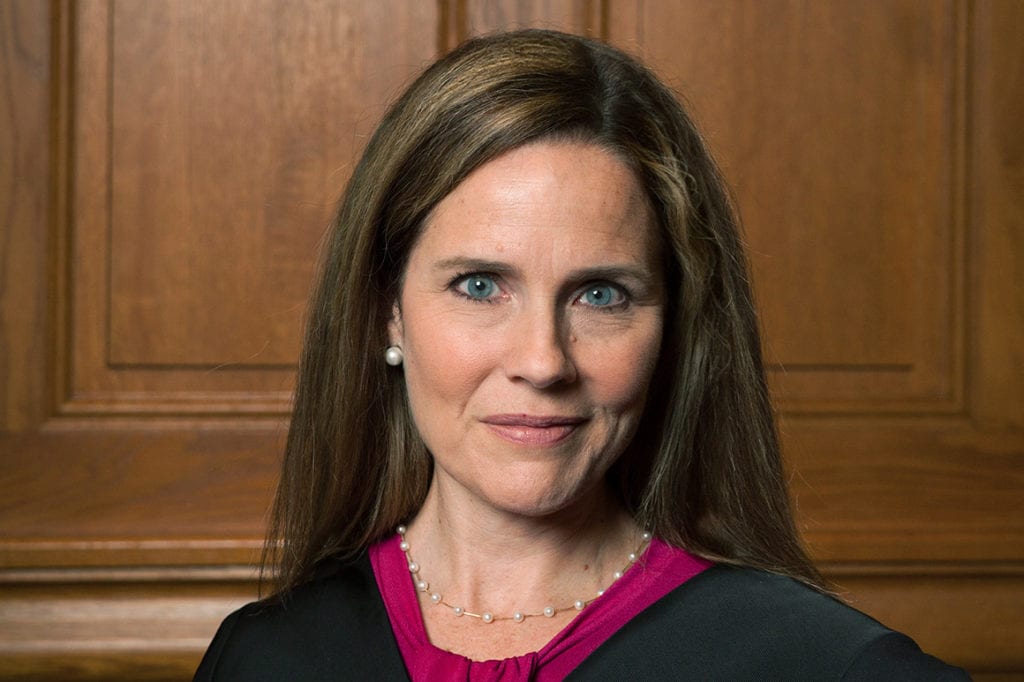