Adam*, a national believer, knew death was coming. He told Jonathan*, an International Mission Board (IMB) worker, he would be killed. His days were numbered, and though he didn’t know the number of days, he knew what God had called him to do.

Six months before his death, Adam was in a difficult place in his spiritual life. In one of their Bible studies, Jonathan and Adam read in Luke 14:25-34 how Christians are called to count the cost and carry their crosses.

“No one builds a tower without sitting on it first and calculating the cost (Luke 14:28). We were talking through that passage, and he was in this place where he was trying to decide, ‘Am I ready to keep doing this ministry?’” Jonathan said.

Adam had just spent time in jail after local Muslim leaders arrested him. His father-in-law was one of the men leading the persecution against him.

The Lord had already used Adam to lead many to Christ, and this drew attention in a territory known for its volatility and entrenched Islam.

Jonathan’s relationship with Adam had just begun to deepen, and they had been meeting to study the Bible.

Though Adam’s heart was weary, he knew God was calling him to pick up his cross and follow – even if it cost him everything. And it would.

“My people need the gospel,” Jonathan remembers Adam telling him. “I will die for doing what I’m going to do, but I need to give leadership to my people and bring the gospel to them.”

Jonathan and Adam began hosting trainings with Muslim background believers and reorganized networks of house churches. Before the last of Adam’s days on earth, Adam and Jonathan formed and organized 19 house churches from existing and new believers and were training new leaders.

Jonathan was 35,000 feet in the air, flying from Asia to the U.S., when four Islamic militants seized Adam from his home. Rapid gunfire erupted as they shot him multiple times. He was dead upon arrival at the hospital.

“From what we understand, these four men who came and killed him, it was their initiation to become full members of that terrorist organization,” Jonathan said.

Adam was a former Muslim, the village leader in his town and drew attention because of his vibrant faith.

His martyrdom rocked the house churches. Terrified at the cost of Christianity, many of the churches fell apart.

A significant number of Muslim background believers choose to go back to Islam, Jonathan said, primarily because of community pressure.

Still, many believers in the area are willing to pay the ultimate price for the sake of the gospel.

‘Whatever happens to me, Jesus is worthy’

“If I die for doing this ministry and bringing the gospel to Muslims, will you help take care of my wife after I die?”

Andrew* came to Jonathan with this question and a request for dream interpretation. In the dream, Andrew was in a Muslim village and was sharing the gospel with a new group of Christians when an enraged mob came to the house and killed him.

“I think it means that if I keep doing what I’m doing, then I might die,” Andrew answered.

It wasn’t a question of whether or not Andrew would bring the gospel to Muslims. He’d made up his mind already, but he needed assurance his wife would be cared for in the event of his death.

“Every time Andrew leaves the house, his wife just prays he comes back,” Jonathan said.

Jonathan promised to take care of his wife if he was killed.

When Jonathan and other IMB workers begin to train Christians, many of whom come from varied religious backgrounds, to share the gospel with Muslims, they begin by discussing barriers that keep Muslims from hearing the gospel.

Fear is one of these barriers.

Jonathan tells Christians that fear of death or persecution can’t be greater than fear that others won’t hear the gospel and will die without Christ. “We have to overcome this fear,” he said.

Persecution isn’t new to Andrew. His father became a Christian and was disowned by his father, Andrew’s grandfather. Andrew was forcibly taken from his father and was raised by his grandparents.

“You have to atone for your father’s sin of becoming one of those Christians,” Andrew remembers his grandfather telling him. After his grandparents’ death, Andrew moved to the capital city, heard the gospel and committed his life to Christ. He reunited with his father, and his father discipled him and they ministered together.

Andrew is sharing the gospel far and wide and people are listening and responding in both positive and negative ways. The negative responses are not a deterrent.

That’s the kind of faith Jonathan encounters among many Christians in his region.

They know they are putting themselves in substantial danger, Jonathan said, adding that Christians live with the mentality, “Whatever happens to me, Jesus is worthy. He’s worthy. The gospel is worth that.”

Jonathan and other Christians are ministering among house church leaders who are still struggling. They are focusing on regathering Christians and infusing strength back into the house churches.

Jonathan and his family had to move from the area, but they continue to share the gospel with Muslims, both directly and through training and equipping local Christians.

For more resources on how to pray for the persecuted church, visit imb.org/persecuted.

Ways to pray for believers in this area:

(EDITOR’S NOTE – This story is part of a series on global persecution, leading churches to pray for the persecuted church. The Day of Prayer for the Persecuted Church will be observed June 6. Caroline Anderson* is a writer for the IMB.) 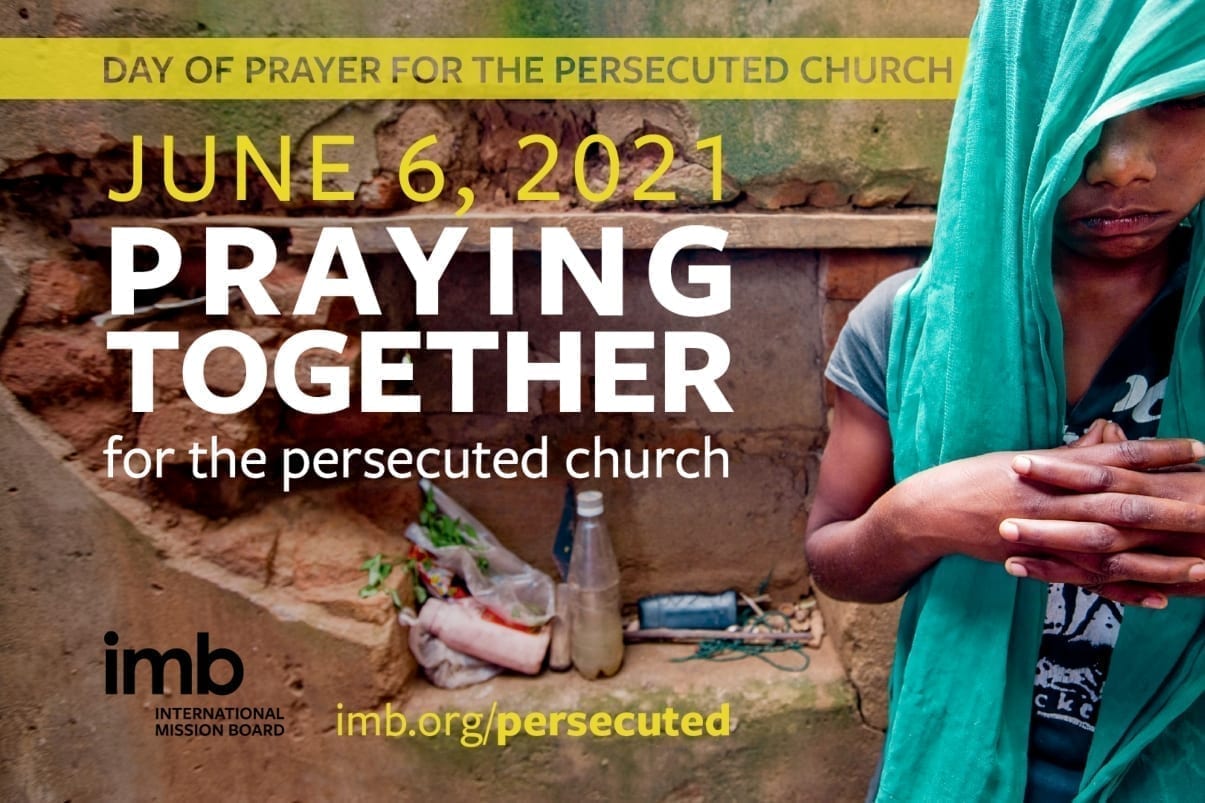