Roasting coffee spelled adulthood for Ruben Torres-Fuentes. At 12 years old, he struggled to learn English and thrive after his family fled the violence of drug cartels in Rio Bravo, Mexico.

“We came from violence. The border situation got very dangerous. With all of the difficult situations that I had in my life – being here and not speaking the language, starting from scratch. We didn’t know many people,” Torres said of his family. “We didn’t have many resources, many connections.”

That’s when a friend invited him to the nonprofit Harvest Hands Community Development Corporation, then a new afterschool empowerment ministry for underprivileged neighborhood youth in and around the Napier Housing Project in South Nashville.

“I was super excited to do coffee, because coffee is a grownup thing to do,” Torres said. “If I’m roasting coffee, I’m an adult, you know.”

The fee Nashville First is charging Humphreys Street to lease the coffee shop where office space averages more than $350 per square foot? A dollar a year.

Senior Pastor Frank Lewis describes it as a ministry partnership poised to help Harvest Hands bring more students out of poverty and position them for success.

“We wanted great tasting coffee, but equally, we wanted a ministry that made a difference in the lives of people in Nashville. Humphreys Street does that,” Lewis told Baptist Press. “To strengthen the partnership that we felt with Humphreys Street, we are charging them one dollar per year to rent space on one of the most highly pedestrian-trafficked intersections in downtown Nashville. Every cup of coffee that is sold will help these young men and women in tremendous ways.

“Through sports leagues and after-school mentoring and tutoring programs, Harvest Hands realized these children needed a job when they turned 16. Without a viable job, the cycle of generational poverty would never be broken. The coffee is found in some of the finest restaurants and hotels in the area because it is excellent tasting coffee. But the ministry really moved us.”

Brian Hicks, Harvest Hands and Humphreys Street co-founder and executive director, came to Nashville 15 years ago in pursuit of a biblical approach to urban community development that compromised neither the gospel nor social justice. An ordained United Methodist minister, he helped launch Harvest Hands in partnership with Brentwood United Methodist Church.

“Part of the philosophy of Christian community development is to immerse yourself in a community and listen to neighbors, with the understanding that folks who are in a community and closest to problems probably have the best solutions,” Hicks said. “Instead of assuming you’re coming in as a savior, you come in as a partner in ministry.”

Brentwood United Methodist bought and demolished a condemned neighborhood crack house, then bought a house across the street from the lot where Harvest Hands housed the afterschool program. Parents had requested help for neighborhood kids who tended toward trouble with nothing to do after school.

“Juvenile crime would spike between like 2 and 6 (p.m.) every day in our neighborhood because the kids, after school, they had nothing to do,” Hicks said. “It wasn’t that they were bad kids. They just didn’t have anything to do, so they were getting into trouble.”

About 15 preteens showed up, but older children stayed away. Hicks realized a paying job would attract the teens. His wife Courtney Hicks had bought a small coffee roaster and also knew how to make soap. The plan was for Hicks to teach boys to roast coffee, and for Courtney to teach the girls to make soap. The youth could keep 25% of the profits, with the soap initially selling better than the coffee.

Billionaire philanthropist Cal Turner Jr., who had served as the CEO of Dollar General and was a member of Brentwood United Methodist, helped Harvest Hands draw up a business plan and invested in the company. Torres was one of the first apprentices.

“I took a kid who was 13 at the time – his name was Ruben – Ruben and I flew to Sandpoint, Idaho, and we learned how to roast coffee from the guy who invented the machine. Cal paid for us to do that. We had a Diedrich roaster and Stephan Diedrich taught us how to roast,” Hicks said. “It’s like a we-learned-how-to-drive-from-Henry-Ford kind of thing.”

Today the company employs young men and women at livable wages making and selling coffee and soap. After wages, all profits are reinvested into Harvest Hands and the South Nashville community.

Brentwood United Methodist, where Hicks serves as a minister, pays his salary, but many churches from various denominations support Harvest Hands.

Nashville First learned of Harvest Hands and approached Hicks about opening a location at the church.

“If this is an opportunity to hire more students and create more jobs, I’m in. We’re interested,” Hicks told Nashville First, “but we don’t want to do a church coffee shop. What we’ve found is we need to run a business that’s really well-run. And if we can run our mentoring program and our shop in your space, I think that makes more sense. Because at the end of the day, what drives the ability for us to hire more students is it has to be a successful shop. It has to actually generate revenue.”

Torres appreciates the opportunity to help others as he has received help.

“That’s actually one of the main reasons why I’m here now,” Torres said. “The help that I got from mentors and the relationships that were formed there are going to be there for the rest of my life, and they really showed me what I can do and who I can be, based on the hard work that I’m putting in.

“But it’s not all hard work. A big part of it was how my mentors showed me the value I had as a human being.” 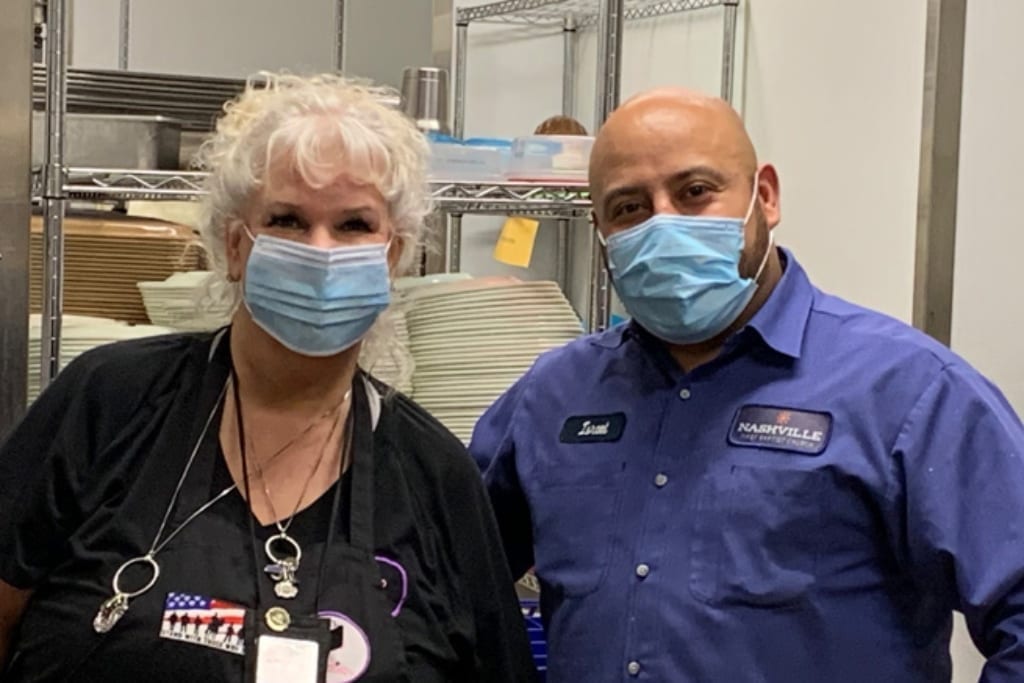