The executive committee of the Baptist State Convention of North Carolina (BSC) passed a motion recommending an alternative plan for this year’s annual meeting that would include an abbreviated one-day meeting to include worship, ministry reports, business sessions and more.

Under the plan approved by the committee, this year’s annual meeting would be held Tuesday, Nov. 10, from 1 p.m. to 5 p.m. at First Baptist Church of Charlotte. The meeting had originally been scheduled for Monday and Tuesday, Nov. 9-10, at the Joseph S. Koury Convention Center in Greensboro.

The convention’s bylaws state, “In case of emergency or unusual circumstances, the Board of Directors (the ‘Board’) is empowered to change the time or place of meeting or cancel the sessions of the Convention.”

The board will consider the recommendation during its regularly scheduled September meeting.

Changes to this year’s annual meeting became necessary after the convention canceled its contract with the Koury Convention Center on Aug. 7. That decision came two days after N.C. Gov. Roy Cooper issued an executive order that extended Phase 2 of the state’s reopening plans until Sept. 11. The order limits attendance at mass gatherings to no more than 10 people indoors and 25 people outdoors.

The extension of the order and lingering uncertainties related to when it would be relaxed or lifted made it infeasible to host this year’s annual meeting at the Koury Center. The convention did not incur any penalties for canceling its contract with the Koury Center.

Following the cancellation of the contract, convention officials began exploring alternative options for this year’s meeting. They consulted with several churches that would enable the convention to hold an annual meeting while maintaining social distancing and other health and safety measures.

After a series of prayerful conversations and conference calls, state convention officers, board officers and BSC executive leaders endorsed the recommendation for a one-day meeting that was presented to the executive committee.

This year’s meeting would not, however, include an exhibit hall or special ancillary meetings normally held in conjunction with the meeting.

The annual meeting schedule and agenda is determined by the convention’s Committee on Conventions Meetings, which is scheduled to meet Sept. 4 by conference call to formulate an alternative schedule based upon the executive committee’s recommendation to the board.

“There are some things that we have to do in terms of business, but I believe that we can have a spiritually uplifting time,” said convention president Steve Scoggins, who pastors First Baptist Church of Hendersonville. “I believe the meeting program will be one that encourages people.”

Micheal Pardue, convention first vice president and pastor of First Baptist Church of Icard, added, “There are a number of Baptists around the state who are really looking forward to (having an annual meeting).”

The annual meeting schedule has been altered at least one other time in history. According to convention records, the 1918 annual meeting was rescheduled from Dec. 5-7, 1918, to Jan. 14, 1919, “on the account of the influenza epidemic.” The 1918 flu pandemic spread worldwide from 1918-19 and was first identified in the United States in the spring of 1918.

In other business, the committee approved the proposed 2021 Cooperative Program (CP) budget totaling $27 million that was presented by the Budget Committee at the July board of directors meeting. The proposal reflects an overall decrease of nearly 11.5%, or $3.5 million, from the current 2020 budget.

The committee also approved a “challenge budget” that would direct any proceeds in excess of the 2021 CP budget amount to be allocated at 50% to the Southern Baptist Convention and 50% to state convention ministries.

The committee also approved a goal of $2.1 million for the 2021 North Carolina Missions Offering (NCMO) and recommended that offering allocations remain unchanged from 2020. Those allocations include: 41% to N.C. Baptists on Mission, also known as N.C. Baptist Men; 28% to church planting; 15% to mission camps; 10% to associational missions projects; and 6% to mobilization ministry projects.

The full board of directors will consider the 2021 CP budget, the challenge budget, and the NCMO goal and allocations at its September meeting before those items go before messengers at this year’s annual meeting, if the meeting is held.

Beverly Volz, BSC director of accounting services, reported to the committee that churches have continued to remain faithful in their support of missions through the CP throughout the ongoing coronavirus pandemic. She also said the convention continues to operate in the black.

Volz said total CP receipts totaled more than $15.6 million as of July 31, which is about 14% behind the budget to date. However, Volz added that total giving is only about 7.5% below gifts received through the same time period as last year.

Executive committee member Noah Crowe thanked the committee and N.C. Baptists for their prayers so far during the early stages of the search to identify the next BSC executive director-treasurer. Crowe is chairman of the search committee and also serves as intentional interim pastor of Peachtree Memorial Baptist Church in Murphy.

Crowe said the committee has already received several recommendations to consider. The deadline for individuals to make a recommendation is Sept. 30, and recommendations must be submitted by email at [email protected]. More information may be found at ncbaptist.org/edtsearch.

The committee also voted to amend the schedule of the next board of directors meeting, which had been scheduled for Monday and Tuesday, Sept. 28-29 at Caraway Conference Center near Asheboro.

The board will now meet in an abbreviated one-day meeting on Monday, Sept. 28, from 10 a.m. to 3 p.m. During the meeting, the board will consider the recommended change to the annual meeting schedule, consider the 2021 CP budget, elect new board officers and elect new committee chairs. 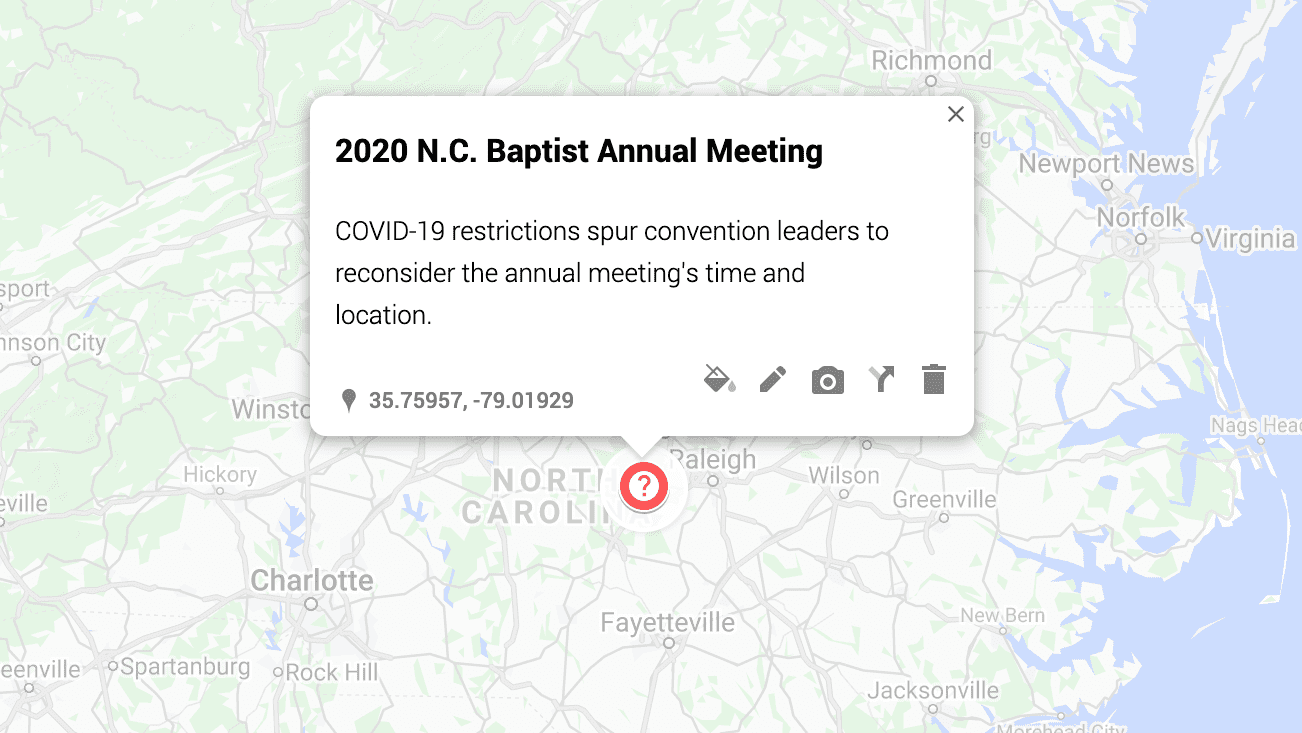