A question about the scope of the investigation into allegations of mishandling sexual abuse claims by the Southern Baptist Convention (SBC) Executive Committee (EC) led to a pledge by the EC to see the upcoming “final” report as only the start to dealing with its impact.

“This investigation and the findings of it are not the ending of where we stand regarding sexual abuse,” said Mike Keahbone, pastor of First Baptist Church in Lawton, Okla. “It’s the very beginning. As an Executive Committee, with one heart [and] regardless of how the votes went in the past, we are united to stand against sexual abuse wholeheartedly.

“… You can bet that we’re going to move forward aggressively in how to address [sexual abuse]. We are all committed to that.”

Keahbone’s words came during a time when questions were allowed from the floor and signaled a shift from last fall’s contentious EC meeting. At that gathering, debate concentrated on waiving attorney-client privilege as mandated by SBC messengers in June. Additional online meetings in the following weeks led to a vote to waive privilege, which in turn led to 17 resignations of the 86-member body.

Moments before Keahbone’s response, abuse survivor Hannah-Kate Williams asked SBC President Ed Litton, who was standing in for Sexual Abuse Task Force (SATF) Chairman Bruce Frank, about allegations that are “public knowledge and well-documented” but nevertheless occurred outside of the investigation’s timeline. “What is the task force or the SBC looking to do to handle that as it relates to the ongoing investigation?” she asked.

Litton responded by reiterating that the scope of the investigation – Jan. 1, 2000, through June 14, 2021 – was approved by messengers. Transparency has been key to the investigation, he said. Furthermore, the upcoming report will include suggestions and recommendations for dealing with sexual abuse and how those decisions will fit into Southern Baptist polity.

Although not technically a member of the task force, Litton is chair of the Cooperation Committee, a liaison between the task force and EC ensuring transparency during the investigation. He delivered the report in place of Frank, who couldn’t attend due to a scheduling conflict, and SATF Vice Chair Marshall Blalock, who was absent due to his mother’s recent death.

Trustees also had questions on the amount of information gathered for the report as well as the possibility of seeing it before its general release.

“Is it reasonable to ask that somehow we would see [the report] … in advance of the general public so we would know what’s about to come out?” asked Jay Ridenour, pastor of First Baptist Church in Sudbury, Mass. The extra time would be beneficial, he said, in preparing for how to address the report’s contents and interpret it for others.

Litton, pastor of Redemption Church in Saraland, Ala., agreed that such a request was reasonable. However, he noted, it was wise to defer to Frank regarding whether it could happen and in what manner.

Guy Frederick, pastor of Mapledale Baptist Church in Sheboygan, Wis., asked for clarification on the reported four terabytes of information handed over to Guidepost and if that fit the definition of the “narrow scope” the investigation was to have.

“[Four terabytes] is a whole lot of data, no doubt about it,” he agreed. But it fits “squarely within the confines of what their mandate was and the information that is to be investigated.”

At the start of his report, Litton said the investigation was “progressing” and commended EC staff and trustees for their cooperation. Challenges related to scheduling, he added, appear to have been resolved. 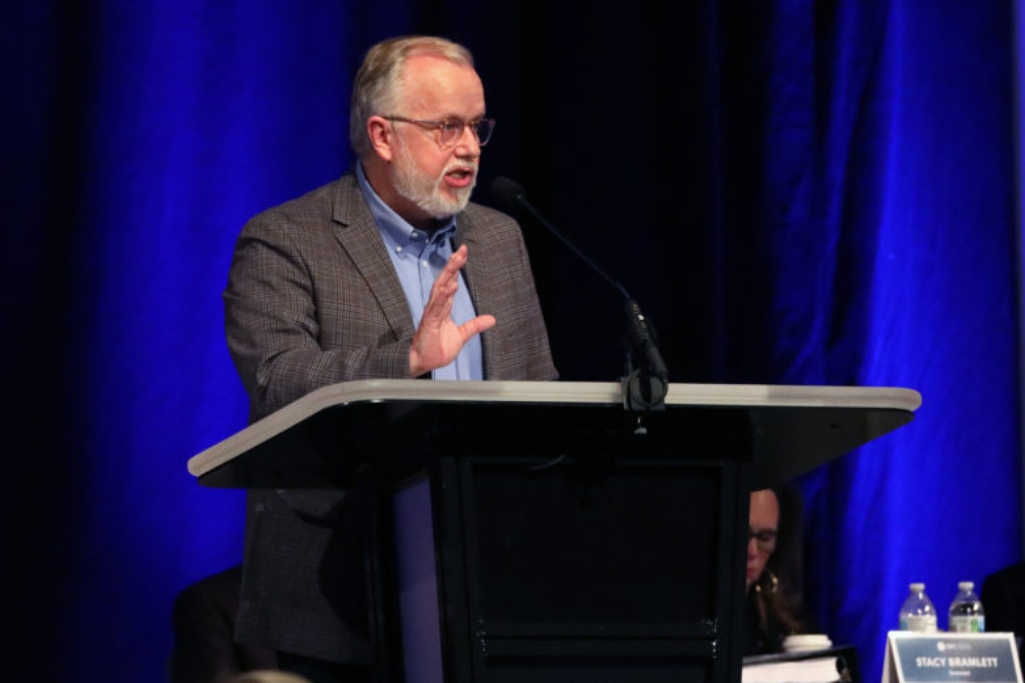 Litton stresses ‘removing stains’ of the SBC in EC address