The Southern Baptist Convention’s (SBC) religious freedom entity has commended a federal appeals court’s decision that a cross on public land in Pensacola, Fla., does not violate the First Amendment.

The 11th Circuit Court of Appeals in Atlanta ruled Feb. 19 a cross originally erected in 1941 in Pensacola’s Bayview Park is constitutional based on a 2019 opinion by the U.S. Supreme Court. A three-judge panel reversed a previous decision by the 11th Circuit Court, holding in light of the high court’s ruling on a similar display in Maryland that “the cross’s presence on city property doesn’t violate” the First Amendment clause that prohibits government establishment of religion.

“We are glad to see the religious freedom rights of the Pensacola community upheld” by the 11th Circuit, said Travis Wussow, general counsel and vice president for public policy for the Ethics & Religious Liberty Commission (ERLC).

The ERLC and other organizations filed a friend-of-the-court brief with the Supreme Court in support of the constitutionality of the cross in the Maryland case.

As the ERLC argued in that case, “maintaining a memorial cross is hardly an official establishment in law of Christianity,” Wussow told Baptist Press in written comments. “This new ruling is common sense, and as religious freedom advocates we are grateful for this clear and consistent ruling.”

In 2018, the 11th Circuit affirmed a federal judge’s opinion in which he ordered removal of the now 34-foot Pensacola cross. Before the Supreme Court responded to the city’s subsequent appeal, it ruled last June a 40-foot cross on public land in Bladensburg, Md., does not defy the Establishment Clause. As a result, the justices wiped out the 11th Circuit’s previous decision and returned the case to the Atlanta-based court for consideration in keeping with their ruling on the Bladensburg cross.

The 11th Circuit panel said in its Feb. 19 opinion the Supreme Court’s decision last year demonstrated a nearly 50-year-old test in Establishment Clause cases is dead – at least with respect to cases involving religious displays and monuments – including crosses.” At least six justices hold to such a position on what is known as the Lemon test, the panel wrote.

That three-prong test offered in the court’s 1971 Lemon v. Kurtzman opinion says a law must have a secular purpose, not primarily promote or restrict religion and “not foster an excessive entanglement with religion” to avoid a violation of the Establishment Clause.

“So, for present purposes anyway, Lemon is indeed dead,” the panel wrote.

Many religious freedom advocates have criticized the Lemon test, saying it calls for a purge of religion from the public square that the Constitution does not require.

They “count seven votes [on the Supreme Court] for the proposition that history, tradition, and settled practice must at the very least be consulted – for ‘guidance’ – in deciding an Establishment Clause case, and five votes in favor of granting a ‘presumption of constitutionality’ to established religious displays and monuments,” the judges on the panel said.

The panel wrote, “Removal of the Bayview Park cross at this point – more than 75 years after its original erection and more than 50 years after its replacement with the current concrete version – could well, in the Supreme Court’s words, ‘strike many as aggressively hostile to religion.'”

In a written comment, Luke Goodrich, vice president and senior counsel at Becket, said the Supreme Court has “made clear that religious symbols are an important part of our nation’s history and culture.” Becket, a religious liberty organization, represented Pensacola in the case.

The Pensacola cross was placed in 1941 at a site in Bayview Park and became the focus of an annual Easter sunrise service organized by the Junior Chamber of Commerce, also known as the Jaycees, according to the 11th Circuit panel. The Jaycees replaced the wooden cross with a concrete one in 1969 and later gave it to the city. The cross has been the location of other events, including services on Memorial Day and Veterans Day.

The Bladensburg cross was completed in 1925 to memorialize 49 soldiers from Prince George’s County, Md.

The Supreme Court’s ruling on the Bladensburg cross was the latest in a long line in which the justices have sought to interpret a much-debated clause in the First Amendment that says, “Congress shall make no law respecting an establishment of religion.” The cases have included such considerations as Ten Commandments displays on public property, school prayers and government prayers. 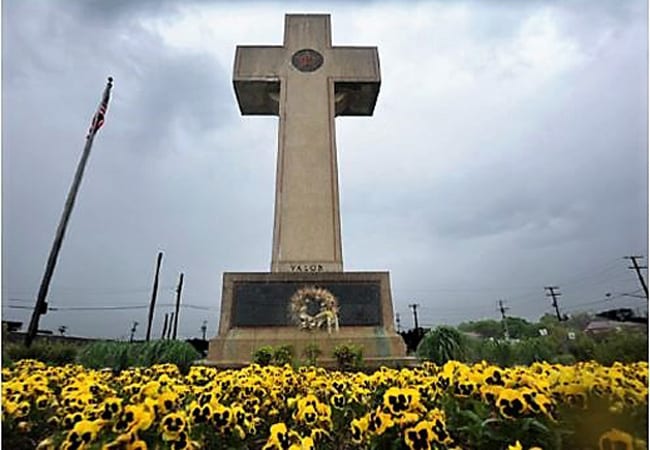