The U.S. Supreme Court can be expected at least to uphold Mississippi’s prohibition on abortion after 15 weeks gestation, the audience for a Southern Baptist-hosted, online conversation was told Dec. 6.

If the justices go further by overruling the 1973 Roe v. Wade decision that legalized abortion nationwide, the pro-life movement will continue but with a different kind of multi-faceted approach, participants also heard.

The Ethics & Religious Liberty Commission (ERLC) held the webinar – titled “Will Roe Go?” – to analyze the Supreme Court’s Dec. 1 oral arguments regarding Mississippi’s Gestational Age Act and to consider how the pro-life movement should prepare for what it hopes will be a post-Roe era.

Mississippi asked the high court not only to uphold its 15-week abortion ban but also to reverse Roe and the Planned Parenthood v. Casey ruling of 1992, decisions that prohibit states from banning abortions before an unborn child is viable. Viability is typically considered to be several weeks after Mississippi’s limit. In friend-of-the-court briefs, the ERLC and multiple other pro-life organizations also urged the justices to overturn Roe and Casey.

The Supreme Court is expected to issue its opinion before its term ends next summer.

Denise Harle, senior counsel for Alliance Defending Freedom and director of its Center for Life, offered an encouraging prediction to the webinar’s pro-life participants.

“No matter what, I think the 15-week limit stands,” she said. “At a minimum, that’s a wonderful thing, because that’s a whole lot more life that’s protected. It’s just a question of whether it will be a huge victory or a more moderate victory.”

If the justices deliver a “huge victory” by overturning Roe and Casey, pro-life Americans will need to adapt and innovate to work creatively in the new reality of abortion policy’s return to the states for the first time in nearly 50 years, said Elizabeth Graham, the ERLC’s vice president of life initiatives.

“[T]he pro-life movement does not end if the court overturns Roe,” she said. “It just becomes 50 separate movements almost, with many different strategies.”

During oral arguments, Chief Justice John Roberts seemed to be seeking a more moderate decision short of overturning Roe, said Harle. Other pro-life lawyers also have made that observation. The other five justices who are considered to be conservatives appeared to lean toward reversing Roe, observers have said.

“I think Chief Justice Roberts really, really wants to be in the majority on this one,” Harle said in a session for reporters after the webinar. Roberts may attempt to encourage some conservative justices, such as Brett Kavanaugh or Amy Coney Barrett, to join him in “a more narrow decision” that would be the controlling opinion, she said.

“I don’t think Chief Justice Roberts wants to find himself in the dissent in this,” Harle said. “And I also think from his questions at oral arguments that he truly does not believe that Roe or Casey were rightly decided. So for that reason too I don’t think he wants to be historically marked with a great legal error.”

While the 1992 Casey ruling affirmed Roe and asserted a right to abortion before viability “is the most central principle” of that decision, it declared a law is unconstitutional if it places an “undue burden” on a woman seeking an abortion.

She thinks “if any of the justices are considering a more incremental decision, they are going to run into trouble once they actually have to write that out and explain what it looks like,” Harle said, “and they will certainly be aware the whole time that they’re just kicking the can a bit down the road and they’re going to repeatedly have cases knocking on their door having them now explain the new ‘undue burden’ standard and why does it stop at 15 weeks and not somewhere else.

“And so I do think that’s another factor that will raise in favor of a complete, clean overturning of Roe-Casey.”

The Dobbs decision “will absolutely have a cascading effect on so many [state abortion restrictions] in the pipeline right now,” Harle told the webinar audience. These include bans on discrimination abortions based on such factors as a child’s sex or disability that have been struck down because of the viability rule, she said. A favorable ruling for the Mississippi law also would provide “good outcomes” for abortion prohibitions based on evidence an unborn child feels pain by 20 weeks’ gestation, Harle said.

If Roe is overruled, Herbie Newell, president and executive director of Lifeline Children’s Services, said, “I think we can’t rest and say, ‘OK, we’ve won a major victory, and now it’s time to go forward.’ But we have to see that as really the first step in our defense for life. And the next defense for life we have to have is to legitimately wrap around these women who are still going to be pregnant and who are still going to be looking for viable options for both them and for their child.”

Graham said Roe’s reversal will mean the pro-life movement will seek to pass state laws to protect unborn children, “but we also have to address why women are seeking abortions to begin with, what’s bringing them to the place whether they feel they have no other choice.”

A survey by the pro-life Human Coalition found 76% of post-abortion women said they would have chosen to parent if their circumstances were different, Graham told the webinar audience. The church has the opportunity to set up care groups for single mothers and to help them with health care, jobs, affordable housing, educational grants and child care, she said.

Newell said, “[T]he way that we can ultimately care for a baby that’s tucked inside of a mother’s womb is by caring for that baby’s mother,” he said. “[U]nfortunately, the pro-abortion movement has painted the pro-life movement as anti-woman and only pro-baby. In all reality, we’re pro-woman and we’re pro-baby because we’re pro-human flourishing.”

The church should be preaching about the sanctity of human life, but the most important thing it can do is to talk about “the grace, the mercy and the gospel of Christ Jesus,” Newell said.

Graham said the church “needs to keep Christ’s love for the broken and hurting front and center.” 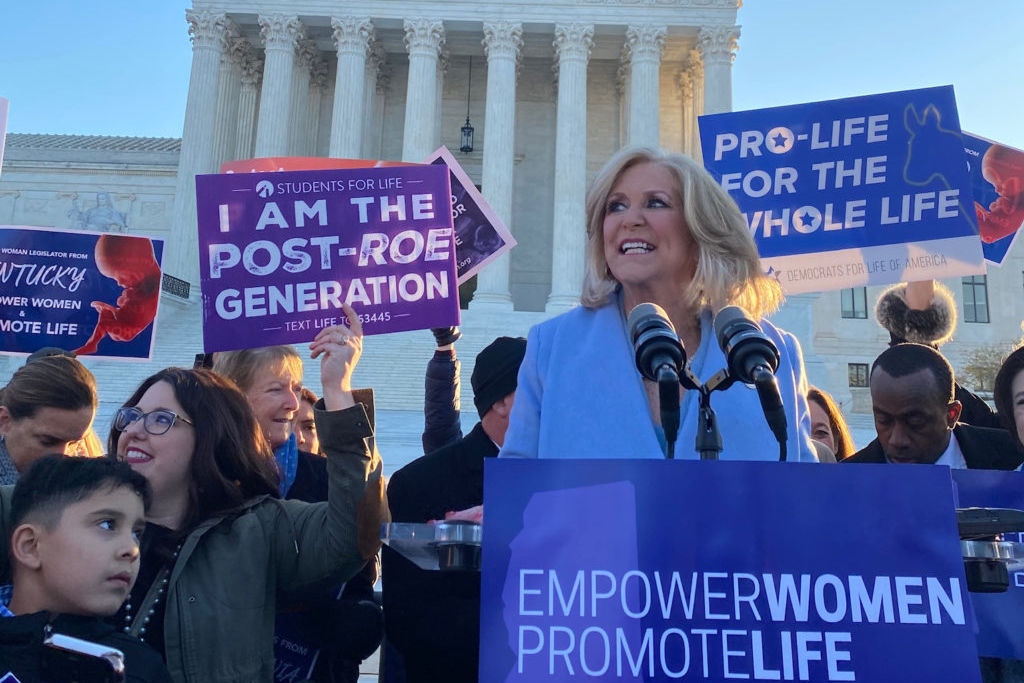