All of the songs feature portions of Romans 8 exactly as they are written in the English Standard Version, a feat not easily accomplished in the songwriting world.

“Conceptually this seems to be something that had really never been done before, in terms of including the sermon pieces and the scripture and the music,” Jessica Waterman, musical director at Immanuel, said.

The songs from Romans 8 were not intended to turn into a full-length album, Waterman explained.

The church was going through a sermon series focused on Romans 8 and Waterman simply set out to write some songs that helped the congregation internalize the truths.

“What can we do as the worship ministry to come alongside what he’s [Pastor Ortlund] doing?” Waterman said she asked herself and the team.

Waterman knew that personally, music helps her with memorization of scripture.

Songs help get scripture into believers’ hearts, she said.

The first two tracks of the album, “No Condemnation” and “If Christ Is in You,” were birthed out of her own personal mediation on the scripture, trying to see what melodies God would bring to her mind, Waterman explained.

Co-writing played a large part in the album with the tracks “Who Shall Separate Us,” “Abba Father” and “Sons of God,” but Waterman said she was personally encouraged by the solo writing she was able to do for the album.

“Sometimes I bring insecurity to those moments when I try to write by myself,” Waterman said. “Can I do this on my own? Do I need somebody to come alongside me and write this?”

The joining of creative minds is awesome, Waterman said, but having the encouragement from the Lord with her individual part in the album’s songs was a blessing.

The goal with many of the songs on the album, in addition to utilizing verbatim scripture, was to create singable melodies for the congregation, Waterman noted.

Waterman said as she wrote she asked herself, “How can we hear this one time and still be able to sing it with each other? How can we dwell on the scripture with music?”

The challenge of style

Although writing verbatim scripture was a new challenge, it was a rewarding experience to see how the crafted melodies folded around the words that otherwise may have been altered or changed, Waterman said.

“Sometimes, as songwriters, we can shy away from doing this kind of thing because it seems like too daunting of a task,” Waterman noted. “But what I loved about it was that we came at it like we’re not trying to make this into our own thing, we’re trying to take what God has given through His Word and create melodies that can go along with that.”

Waterman said the inclusion of diverse styles was very purposeful in the arrangement of the songs as well as the actual writing process.

The team wanted to create an album of various styles in order to keep it exciting, fun and prevent the wearing out of one particular musical feel, Waterman said.

“We try to not be tied to one style or one arrangement of a song, but we really try to touch on a lot of different kinds of music,” Waterman noted. “We’re commanded to sing; we’re not commanded to play a certain style or with certain instrumentation.”

The album reflects to a great degree what the weekly services look like at Immanuel Nashville.

With instrumentation including banjos, trumpets, saxophones and pedal steel alongside drums, piano, guitar and bass, Waterman said no music style is off limits for the team.

“Nothing’s off the table in terms of musical style and diversity, and we know we still have a long way to go with that,” Waterman said.

T.J. Tims, lead pastor at Immanuel, said the album in its usage of singing, preaching and spoken word all together, showed the diversity in which God is worshiped.

“The line between preaching, singing, spoken word, are very fuzzy, and when we sing, we’re preaching,” Tims said. “There’s a very real sense in which God preaches and sings the world into existence.

“Each one brings its own element, of course,” Tims continued, “but they’re all essentially doing the same thing, and it’s proclamation, it’s preaching the Word of God.”

As all of the songs were new or relatively new to the congregation, Waterman said she was especially encouraged by the willingness of attendees at the live recording to just jump in, learn the songs and sing.

“Hearing them sing these songs with us – new melodies, sometimes challenging phrasing – they were all in and that was so encouraging to see, just their willingness to be able to be part of this from the beginning without really knowing what they were getting into. I felt so supported and encouraged by our community in that way,” Waterman said.

The congregation also fully funded the physical production of CDs that the worship team has been able to give away at events and to the community to expand the ministry of the message of Romans 8.

Molly Platt, sister-in-law of Shayna Wiggins, who sang harmonies on the album, said she was significantly impacted from receiving a copy of the album.

Platt said she originally only listened so she could hear Wiggins sing.

“But after that,” Platt said, “I had it on repeat, and I began to sing along with the songs.”

After listening to the songs multiple times Platt said without even fully realizing what was happening the scripture began to make more sense to her.

“God’s Word is powerful and alive,” Platt said. “It makes an impact wherever it goes and is able to change our hearts. Our words are powerful too, but God’s words are omnipotent because they are His.”

Immanuel distributed the CDs in packs of two, with the hope that believers could listen to one copy themselves and give the other away.

Platt said after she gave her second copy away, her car stereo broke and wouldn’t play the CD anymore.

After prying it out with pliers and using Chapstick to heal the scratches temporarily, Platt was able to download the CD.

Having the truths of Roman’s 8 so readily available has been vital in healing a personal struggle with anxiety, Platt noted.

“All I wanted to do was quit,” Platt said. “Quit everything, quit church, quit Celebrate Recovery (addiction recovery program), just quit doing things that I felt pressure from.”

Platt said she would play the Romans 8 album from her phone as she slept, dozing off with the Word of God on her mind. In the morning she would listen to it as she got ready for her day.

“I felt like I was fighting a battle, and using God’s Word is how we fight, that’s our sword,” Platt said. “In addition to reading the Bible, singing it and hearing it spoken is how we can fight.”

Platt recounted that since the meditation on Romans 8 through the live album, her anxiety and depression has lessened and she has been able to do what she knows is God’s will.

“I believe that He sent the Romans 8 songs to me at just the right time when I needed it the most,” Platt said. “I think it was a God-driven project and has been a real blessing to many.”

The uniqueness of the album featuring plain, exact scripture is what made it so impactful, Platt said.

“I think that’s what sets this apart from other music,” Platt explained. “It’s just straight scripture with no additives or changes. I can literally follow along in my Bible to sing it.”

Hope for the future

“My hope is that it would just be a real encouragement to somebody who wants to dive into the Word a little bit deeper,” Waterman continued. “We get these insights from Ray that are just amazing – insights into Romans 8 like what it is actually saying – and we’re able to sing those.”

By actually singing scripture as it is written, Waterman said she hopes that people would be able to recall the truths quicker and latch onto them easier.

“These scriptures have stood the test of time,” Waterman said. “You don’t have to wonder about whether this is going to land on somebody or not because it’s God’s Word.”

Jason Cheek, band leader and technical director at Immanuel Nashville, said it is encouraging to see other churches and artists begin to step into the field of music written from verbatim scripture.

“It sort of feels like there is a movement afoot of people finding out compelling ways to sing truth,” Cheek said. “We’d love to just keep pushing that ball down the field.”

John Brehens, audio engineer for the album, said thinking about the diversity of the album in terms of content type leaves a door open of endless possibilities for how worship can be done.

“It doesn’t have to be just someone singing verse, chorus,” Brehens said. “There’s so much Word and music that can be used to sow God’s Word into our hearts.”

In addition to the moment-by-moment way that the truth communicated through this album helps individuals live for Christ and minister to those who aren’t even believers, Brehens said he hopes to see other churches join in on this approach to worship.

“It’d be awesome to, maybe a year or two from now, be able to digest an album from another church who maybe preached through the Beatitudes or some rich passage of scripture and then did a similar thing,” Brehens said. “I would just love to be able to pull up Spotify and on my drive be fed in a way similar to this.”

Brehens said when considering the life of the church and the sermons that are preached throughout the year, there is such a vast body of work and encouragement that could be put into a musical project, similar to the Romans 8 Live album.

Speaking to the long-term influence and impact of the project, Waterman said she is confident that the Lord will continue to use it in the lives of both believers and unbelievers. 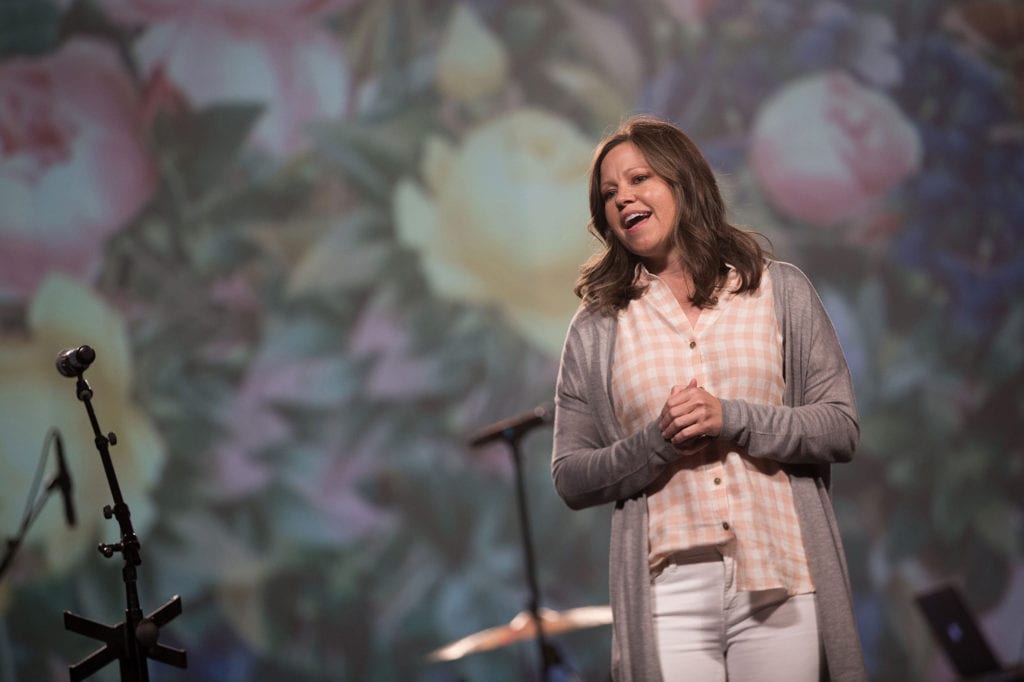