SBC should be known for love, firm convictions, Barber says

Both 2 John and 3 John were his primary texts, focusing on the call to Scriptural truth in the second epistle, and the call to love and cooperation in the third.

“And I want God to make us a family of churches who know how to hold firm convictions about the truth of Scripture, while feeling the obligation to bring everybody that we can who’s in agreement with our statement of faith and with our movement to go and reach the world with the Good News of Jesus Christ, to bring everybody that we can on board into that journey,” he said, “so that together we can fulfill the mandate of both of these books.”

Barber took time to announce the theme and Scripture for the 2023 SBC annual meeting set for June 13-14 in New Orleans. “Serving the Lord, Serving Others,” will be the theme, supported by 2 Corinthians 4:5.

“I wanted to have a theme that really just ties together who we are as Southern Baptists,” he said. “And the other thing I love about that theme is that if any community has seen what Southern Baptists are like, serving other people in the name of Jesus, it’s been New Orleans,” he said, referencing Southern Baptist rebuilding efforts after the devastation of Hurricane Katrina in 2005 and in subsequent disasters.

In his first presidential address since his June election, the rural cattle farmer and full time pastor of First Baptist Church of Farmersville, Texas, told the EC he discovered the meat of his message while on a mission trip to train pastors in Senegal.

“What happened in that moment in Senegal in that little mud house with those teachers, is that I found the Southern Baptist Convention in the Bible,” he said. “We live in this crack here of the pages between 2 John and 3 John.

“It is good and right that we be watching for sexual predators who would come into our flocks and destroy the hearts and the bodies and the lives of precious children of God. …

He described both epistles as written in the defense of truth: one focusing on supporting only adherents of God’s Word, the other extolling the church’s faithful love.

“So here’s my mission for me. I want to watch my own heart, my own actions, my own tongue,” Barber said. “I want to be on guard against the moments when I dance over so far into 2 John, that I’ve left 3 John all the way behind. And I want to guard my heart against those times when I’ve wrapped myself up in 3 John so much that I’ve completely wandered away from 2 John.”

Using his own church as an example, Barber said First Farmersville supports the SBC Cooperative Program – the funding mechanism for Southern Baptist cooperative work – in support of work the church intends to be Scripturally sound.

“And sometimes it’s easy to live in 2 John, but 3 John must be taken into account too.”

Barber proclaimed “a divine obligation” to support the work of those who proclaim the gospel “in truth and fidelity to the Scriptures.”

He encouraged churches to continue to support the work of international missions.

“We believe that the people who have gone to far-flung and dangerous places around the world to share the gospel have gone out from our church and from churches like ours,” he said. “And if we will not be partners with them in the good work of the Holy Spirit that they have engaged in, who will? If it’s not the responsibility of the churches who are sending them, whose responsibility is it?” 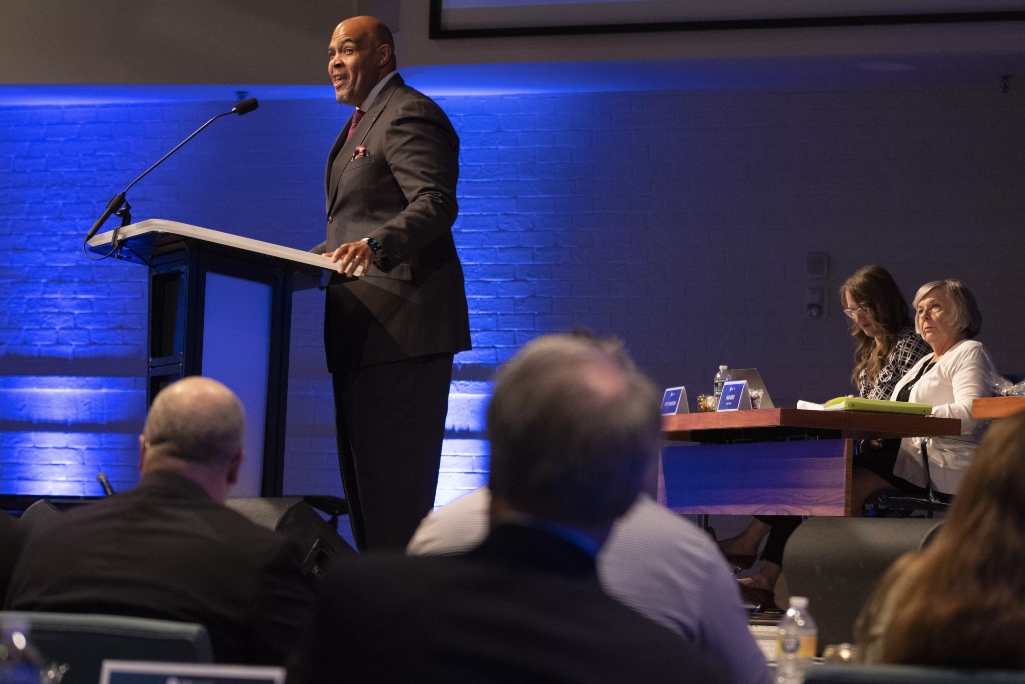 McLaurin: ‘Convention is only as strong as our relationships with one another’