Southwestern Baptist Theological Seminary (SWBTS) and Dallas Baptist University (DBU) have partnered together to offer a joint master of divinity/master of business administration degree, the institutions’ presidents announced yesterday during a signing event on the seminary’s Fort Worth campus.

“This is a joint venture and joint relationship, and I think something that models the kind of collaboration and cooperation that ought to mark Christ’s people, and certainly ought to mark our work as Baptist institutions of higher learning here in the great state of Texas,” SWBTS President Adam W. Greenway said.

“This represents, I believe, a bold, compelling vision for theological education, for higher education, that really is unprecedented in our world, and the kind of cross-collaborative relationship that I hope will prayerfully be an increasing reality given the cultural situation we find ourselves in today.”

DBU President Adam C. Wright said, “We read in the scriptures about being sent out two by two. We read in the scriptures about how a cord of three strands cannot be easily broken. … There is so much more that we can do as Christian leaders, as institutions committed to a greater call, when we find and we promote the things that we are all about rather than the things that we are against.

“I have so much appreciated the friendship and collaboration already with Dr. Greenway, and I just cannot wait for what I know that God can and will do in the future.”

The partnership arose in the spring of 2019 when, shortly after his election as president, Greenway received a congratulatory letter from Wright, who invited him to lunch at DBU. Greenway accepted, and the two presidents spoke about their “mutual interest” in strengthening the ties between their respective institutions, Greenway recalled.

“It is my read of our history that when we have been at our best, there has been a strong and vital relationship and connection between Dallas Baptist University and Southwestern Baptist Theological Seminary,” Greenway said during the signing event. “… Dr. Wright made it clear to me that that was his desire; I reciprocated that. And one of the things I shared, based upon my own experience, is that the leaders who would be serving the body of Christ moving forward needed a broader skill set of training.”

Reflecting on his own experience of pursuing a master of nonprofit administration degree at the University of Notre Dame, Greenway suggested that a joint MDiv/MBA program would be beneficial for both SWBTS and DBU students. When he asked Wright about the possibility of a SWBTS/DBU partnership, Wright responded, “Let’s make it happen.”

During the signing event, Wright joked that the two institutions had already “shared so much over the years,” including beliefs, faculty and donors, “and so, might as well share students as well.”

In his opening prayer for the signing event, Stinson said, “My prayer for today is that the result of this signing would be that many men and women would further prepare themselves not only with a master of divinity but with an MBA that would serve them all over the world in terms of the mission field and opportunities for them to take the gospel to every tribe, every tongue, every nation and every people.”

Following Greenway and Wright’s formal signing of the partnership agreement, DBU Provost Norma Hedin, who served on SWBTS’ faculty from 1990-2007, said, “We are very pleased to be a part of this partnership with you. Particularly with all of the divisiveness in our world right now and in our nation, it is a joy to join together in a positive and hopeful opportunity.”

Hedin then prayed the closing prayer, saying, “We thank You for the opportunity to join together with these brothers and sisters here today to commit to You to provide opportunities for students to learn the skills they need to learn, to engage in deep study that will prepare them for Your calling on their lives.”

More information about the program can be obtained from the admissions offices of the respective schools, as well as online at swbts.edu/mdivmba or dbu.edu/graduate. 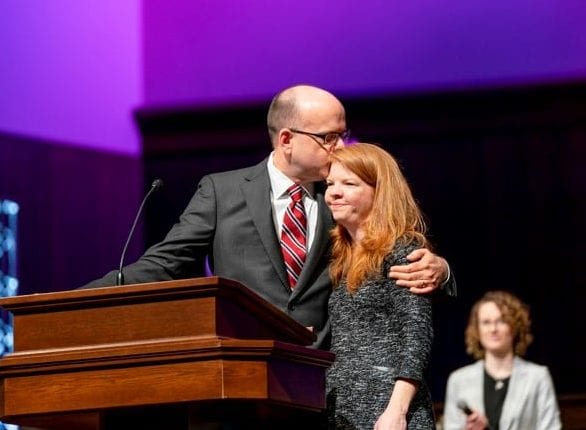