Kenton Hunt, disaster relief director of the Baptist Resource Network of Pennsylvania/South Jersey, expresses a heartfelt burden to help the hundreds of homeowners in his region trying to recover from flooding and tornadoes wrought by Hurricane Ida.

“It’s hard to find enough help to work with, and most of Southern Baptist Disaster Relief was concentrated on Louisiana, because that’s where Ida hit first and did the most damage,” Hunt said. “So now here we are way up on the upper edge of where Ida went off shore and finally petered out, but dropped a lot of rain, as much as 10 inches in some places. … That’s a lot of water to handle in one storm. … I’ve had to ask for help because it’s so much bigger than we can do ourselves.”

Seven state conventions are helping with flood cleanup including chainsaw work, feeding, chaplaincy and assessment in three Pennsylvania counties Hunt serves, but Hunt said the widespread need for help has stretched volunteers thin. And he’s not aware of another relief organization currently in the area to help homeowners clean up from the storm.

“We are not going to meet all the needs. … But everybody’s leaning on us, and we’re a small state convention. I’m feeling the weight of it,” Hunt said. “I feel responsible to do everything we can to meet the needs of the people … that truly need assistance to clean up, to remove the trees that they cannot do themselves or cannot pay someone else to do. Or to clean up their home, to get it where it’s safe and sanitary to live in again, and remove debris that’s just holding the water and getting rid of mold and other contaminants in the home that make the house unsafe.

“I feel responsible. We know how to do this stuff, but just having the manpower. I know my counterpart north of us in New York and North Jersey is facing the same thing.”

Mike Flannery, disaster relief director for the Baptist Convention of New York, is receiving help from and has commitments from six state conventions to mainly conduct mud-out and mold remediation, but he also voices concern.

“We didn’t get much (news) coverage up here in the New York area, maybe one or two days, then it’s off the front pages,” Flannery said. “Not to complain or anything. I’m not complaining about that. But I am concerned that a lot of times people don’t think anything’s going on in flood recovery areas. When I’d tell people from Buffalo I’m going to go over to New York City to do flood recovery they said, ‘What flood. What happened?’ They just don’t remember or they missed those two days of news reports that they had on mainline TV.

“But there’s hundreds of houses, thousands of houses. I think the five boroughs had 15,000 requests for assistance. But in New York City, the city has to go out and inspect it before they allow volunteers to come in.”

Both leaders express appreciation for the help they’re receiving from other states, local churches, donors and other volunteers. Work is expected to continue into October in Pennsylvania/South Jersey, and possibly into November in New York.

“We do have plenty of callouts, plenty of work to do,” Flannery said. “We want the Southern Baptists to know that we’re still working … and they can volunteer. We’d love to have them.”

Among conventions helping Flannery and Hunt, in addition to Pennsylvania/South Jersey and New York, are the Baptist conventions of Kentucky, Maryland/Delaware, Michigan, New England, North Carolina, Ohio, Utah/Idaho, and the Baptist General Association of Virginia.

The work in the northeast is in part of the larger Southern Baptist response to Ida including Louisiana. Meanwhile, work in Louisiana was hampered by rain from Hurricane Nicholas, which came ashore near Matagorda, Texas, Sept. 14 as a Category 1 storm with wind gusts of 95 mph. As much as 10 inches of rain was reported in parts of Louisiana, weather.com reported, with rain expected to linger for days.

Southern Baptists have together logged 9,700 volunteer days, prepared more than 530,000 meals and aided more than 500 homeowners with chainsaw work, debris removal and temporary roofing, the North American Mission Board (NAMB) reported Sept. 16. More than 106 professions of faith have been reported through nearly 500 presentations of the gospel, NAMB said.

“I never cease to be amazed by how God’s people come from across the United States to serve as the hands and feet of their Lord Jesus, filled with His compassion,” said Sam Porter, national director for Southern Baptist Disaster Relief (SBDR) with Send Relief. “With catastrophic hurricanes, the recovery can go on for months as SBDR volunteers help individuals and families clear trees from their homes, place temporary roofing or gut out flooded homes so that they can rebuild.”

Coy Webb, crisis response director for Send Relief, said he expects work to continue for weeks as teams “continue to assist survivors with hundreds and hundreds of damaged homes across southern Louisiana and from Virginia to New York in the Northeast.” 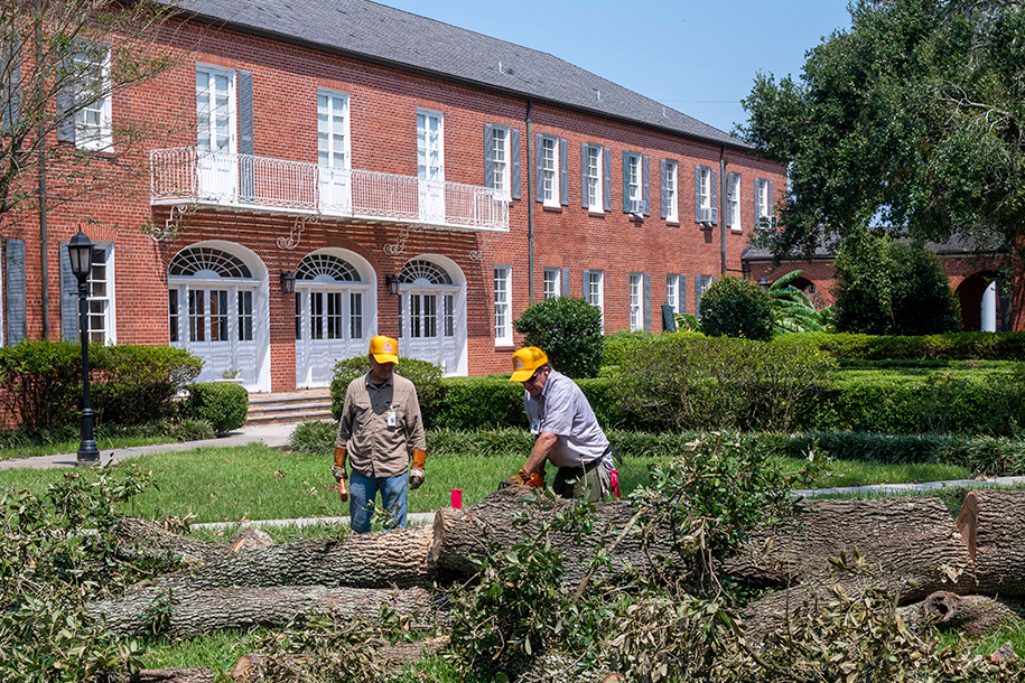