If I can borrow from the sentiment of 1 Peter 3:15, when we are asked, “Why are you Southern Baptist?” we should all be able to give a reason and do so with gentleness and kindness.

The question we get is, “As a Black man or Black woman, why are you Southern Baptist?” Let me give you a couple of reasons why this remains a question in the community of color, and then I will share my reasons for being in the Southern Baptist Convention (SBC).

The challenges of being Southern Baptist as an African American include:

The SBC was founded in May 1845 in Augusta, Ga., where 293 delegates gathered to break away from the American Baptist Home Mission Society forming a new mission society. The historical fact is that the SBC was born out “. . . of a commitment to preserve and defend slavery” (Matthew J. Hall, Removing the Stain of Racism from the Southern Baptist Convention). Don’t think the Southern Baptists were walking this road alone – there were similar situations among the Presbyterians and Methodists.

The SBC heritage is that many of our white brothers and sisters were effectively born into the SBC – a heritage passed from their great, great, great Southern Baptist granddaddies. In this heritage the ideologies and symbols of a perpetuated myth include white superiority, manifest destiny and paternalism. We see this heritage on the names of buildings, revered names in the hallowed halls of agencies and institutions. This revered heritage is a perpetual inference of a mindset that those of a darker hue (Black and Brown) may not be equal and are an infringement upon the heritage for some.

Recently, an unprecedented number of agency head positions were vacant, along with a couple of other lesser appointments of note. Now, first let me say that all of the selections were filled by men of good reputations, good character and good qualifications – I know a couple of them personally and they are all good Christian men. But that is not the issue!

The issue is that in a Convention that promotes its diversity and at a time when there were five agency heads vacant, if not one Black, Brown, African-American, Hispanic, Native American, Asian, or Islander is selected, we have a problem in our hiring processes.

I worked in hiring and HR in one of my previous jobs. There is an inherent bias in hiring – in general we tend to hire people like ourselves, because we are comfortable hiring people like ourselves. Unconscious bias toward people who are of the same race, education level, or economic status, and have the same personality, fears, or values, influences who you hire much more than you think.

We need to bring this to the attention of those who have hiring authority. We must be intentional in hiring people who we may not be “racially” comfortable with. Don’t be afraid to hire someone to head an agency who is racially or culturally different! Otherwise, optically, it looks like we are protecting the history and heritage in our hiring.

Again, all the men who were selected are fine and qualified people. We want them to do well, so I take nothing from them. They are all brothers in Christ! But, hear me now: In the SBC, we need Black and Brown faces in high places!

And yet, even with the history, the heritage, and the hiring, I am still unashamedly Southern Baptist!

So let me share why I am Southern Baptist:

1) I am Southern Baptist because I am a Christian.

First of all and most of all, I am unashamedly, unabashedly Christian! I am a born-again, baptized believer in the Lord Jesus Christ. I am redeemed and Jesus Christ is my redeemer. I am blood-bought and Christ-sanctified, declared righteous by God through faith in the Lord Jesus Christ. I believe that Jesus died for my sins and rose from the dead on the third day, and through Christ and Christ alone, I have eternal life. I believe that He chose me in Christ Jesus before the foundation of the world!

So before I am Southern Baptist, I am a follower of Jesus Christ. Before I am Black, I am a Christian. At my core and at my center is Christ! He is the reason for the hope that I have.

God will shake us to make us, to take us to where He wants us. We are in His hands, and the best place to be in the whole wide world is in the hands of Almighty God! I am Southern Baptist because I am a Christian.

2) I am Southern Baptist because of my choice.

Yes, despite the history, despite the heritage, despite the hirings, despite all of that and more – I still choose to be Southern Baptist. By the way, there is no perfect denomination or convention. If you happen to think you have found one, please by all means don’t join it. Because once you join it, it will not be perfect!

I look back at the founding in 1845 by slaveholders and slave promoters, promoting white superiority, and from that foundation to the milestone election of Fred Luter as the SBC president in 2012, some 167 years later – God has brought us a mighty long way.

Though change might be slow, it shows that the arc of the moral universe is long, but it is bent toward justice. We can sit down at the table of brotherhood and sisterhood as one through Jesus Christ.

I choose to be Southern Baptist because of the work in missions; the synergy in missions; the disaster relief efforts; the exaltation of Jesus Christ; the gospel-centeredness; the belief in Christ alone for salvation; the clear presentation of the gospel; the pro-life beliefs; the belief that the Bible is the authoritative Word of God; the repentance for past sins as a group; and the fact that we are better than when we first began.

I choose to be Southern Baptist because of the high view of scripture, that we come under the authority of the scripture that governs our lives. We are not biblically liberal, we are not the prosperity gospel, and we are not heretical in our hermeneutic. Christ is the only way – not one way among many ways, but the only way to salvation.

I choose to be Southern Baptist because I believe that God has His hand on this Convention for such a time as this. He is bringing together white, Black, Asian, Hispanic, African and Native American, along with people of every tongue, tribe and nation to be a picture of heaven, to exalt the name of Jesus Christ, and to share the gospel around the world! We learn from our past and strive to reach higher ground in Christ Jesus.

Admittedly, some days being Southern Baptist is a lot like being married. In marriage not every day is a bowl of cherries – some days it feels like the pits. But you hang in the marriage because that woman or man you married is worth the trouble. My friends, our SBC is worth the difficult moments. We can do more together than we can by ourselves.

I believe we are America’s best last hope, and we ought to be able to get it together because we’ve got King Jesus on our side! And even when I look back over the last 25 years that I’ve been in this Convention and attending the annual meetings, I’ve just got to say, “God has brought us a mighty long way!” Therefore, I am Southern Baptist by choice.

3) I am Southern Baptist because I am called.

My friends, God is up to something with the SBC. I believe that God has been shaking and shaping our Convention since 1845, to get us to where He wants us and to be all that He wants us to be. We must work cooperatively to reach the world for Jesus Christ – that more men, women, boys and girls of every hue and every nationality would come to know Jesus Christ as Lord and Savior.

We have got to strive to be one in Christ – loving God and loving one another. We are many different members, but one body in Christ Jesus. When we are one, one body under God, we can sure enough make hell shudder and heaven shout! Despite our history, heritage and hiring, I am Southern Baptist because I am Christian, because I choose to be, and because I feel called to be.

As part of the Convention I have seven actions that may help all of us as we move forward together. Let us:

(EDITOR’S NOTE – Marshal Ausberry is first vice president of the Southern Baptist Convention and pastor of Antioch Baptist Church, Fairfax, Va. He is also president of the National African American Fellowship of the SBC.) 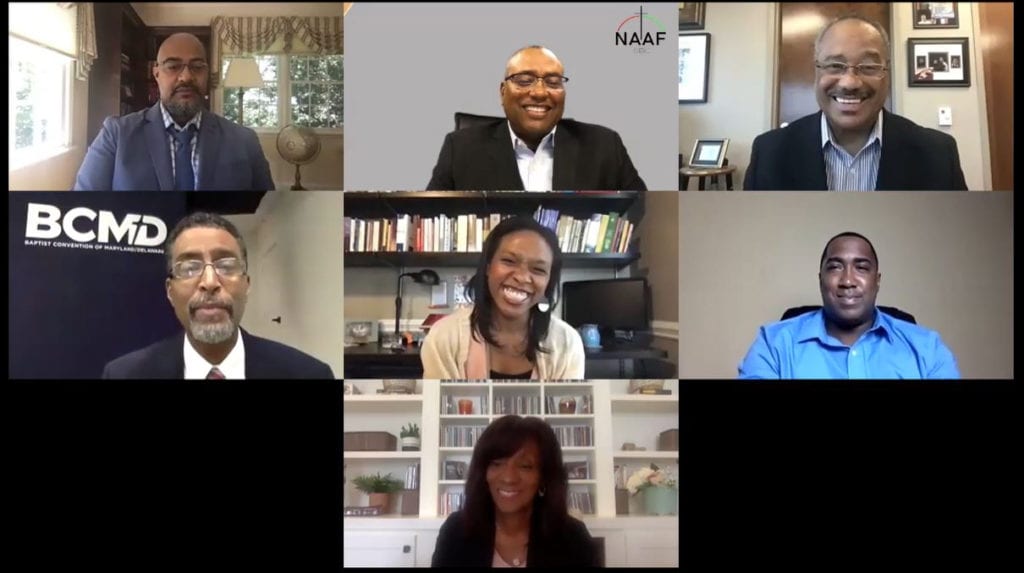