Updated housing options are now available for messengers to the Southern Baptist Convention’s (SBC) annual meeting. Those with hotel reservations at or near the Gaylord Opryland Hotel will have the opportunity to shift to any of 19 downtown hotel options.

The SBC Executive Committee announced April 15 that the annual meeting, scheduled for June 15-16, would move from the Gaylord Opryland Resort and Convention Center to the Music City Center in downtown Nashville. The decision was made to allow for adequate space amid COVID-19 concerns. Located in the heart of downtown Nashville, the Music City Center offers 1.2 million square feet of convention space, almost twice as much as the Gaylord Center.

The exhibit hall and childcare will also move to the Music City Center, as will the 2021 Send Conference. Hosted jointly by the International Mission Board and the North American Mission Board, the June 13-14 Send Conference will immediately precede the annual meeting.

Of the available hotels, 19 are in the downtown Nashville area. Nightly rates are as follows:

More hotels and hotel rooms in proximity to Music City Center are expected to be added as the annual meeting approaches, Executive Committee leaders said.

Executive Committee President and CEO Ronnie Floyd said last week that for himself and other leaders, keeping the annual meeting in Nashville was paramount, considering many messengers had already made travel plans. Floyd stressed that the move to the Music City Center could not have happened without the cooperation of the City of Nashville, the Gaylord Opryland Resort and Convention Center, the Nashville Convention and Visitors Corp. and the Music City Center as well as the numerous participating hotels in the downtown area.

The 2021 annual meeting will be the first in two years, as the 2020 gathering was canceled due to the COVID-19 pandemic. SBC President J.D. Greear has chosen “We Are Great Commission Baptists” as the theme for the meeting.

Jeff Pearson, chief financial officer for the Executive Committee, said more details will be released in the coming days concerning the relocation of ancillary events to the Music City Center or other nearby venues. Details about shuttle services for those choosing to remain at hotels near the Gaylord Opryland Center or airport are also forthcoming. Updates will be posted to sbcannualmeeting.net/faq and SBCannualmeeting.net. 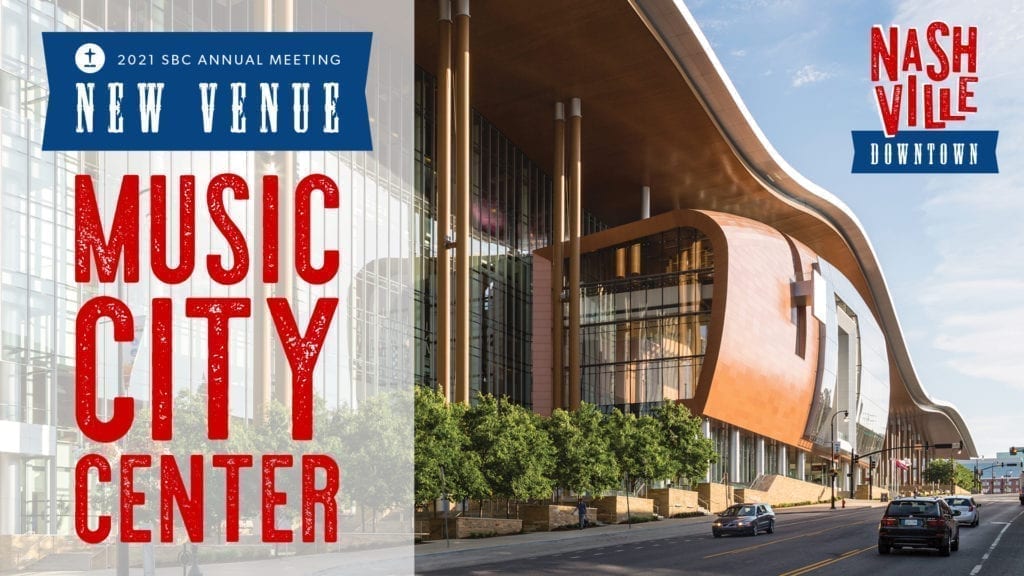