A chocolate factory owned by a couple of Southern Baptists is among the factories that have converted to make medical face shields to supply hospitals with personal protective equipment needed in the COVID-19 fight.

Michael and Angie Moss own Sweet Shop USA, the largest handmade chocolate manufacturer in the country, in Mount Pleasant, Texas. The company was founded in Fort Worth nearly 50 years ago before relocating to northeast Texas, and they supply thousands of retailers nationwide, including Nordstrom.

With the slowdown of sales at retail stores because of the coronavirus pandemic, Sweet Shop USA wasn’t receiving as many orders and had to lay off about 10 of their 80 employees. The Mosses, members of New Beginnings Baptist Church in Longview, were praying about what to do when they heard President Donald Trump mention the Defense Production Act.

“My husband remembers his grandparents talking about World War II and how companies did other things during that time to meet needs in the supply chain,” Angie Moss told the TEXAN.

On March 20, Michael Moss woke up with an idea to make medical face shields. He contacted a vendor in New York who usually supplies the chocolate factory with packaging and asked if he could cut plastic shields with a die cut machine. The vendor told Moss he was planning to close his doors the following Monday because of a lack of orders, and he was delighted to have something to make, Angie Moss said.

Sweet Shop USA started spreading the word that the company would be able to supply face shields, and within hours hospitals in New York, Chicago and Seattle were interested, said Moss, who also serves as vice president of sales.

Six days after Michael Moss looked into the idea, the first face shields rolled off the converted assembly line. The Mosses’ college-age son planned to personally deliver 14 cases to a hospital in Tyler the next day “just to get them to them faster because they need them urgently,” Moss said.

“We presold in the first three days almost 300,000 facial shields,” she said, adding that many hospitals usually order from manufacturers overseas, such as in China, but the pandemic has severely disrupted those supply chains.

The face shields now produced at the chocolate factory are called “Waymaker,” Moss said, because Isaiah 43:16-19 has been important to them in recent days. The passage says in part, “Behold, I am doing a new thing. Do you not perceive it? I will make a way in the desert.“

To make the shields, Sweet Shop USA converted its packing area – 20,000 square feet of the 80,000 square feet facility. They set up tables “sort of like stations, and we’re trying to practice social distancing. They’ve got masks on too, trying to keep everybody safe,” Moss said. 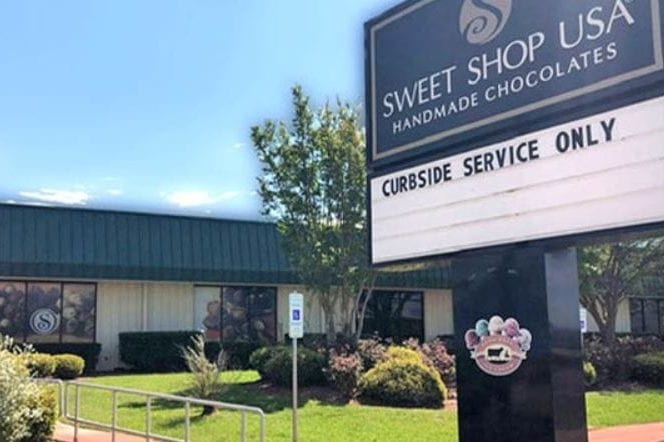 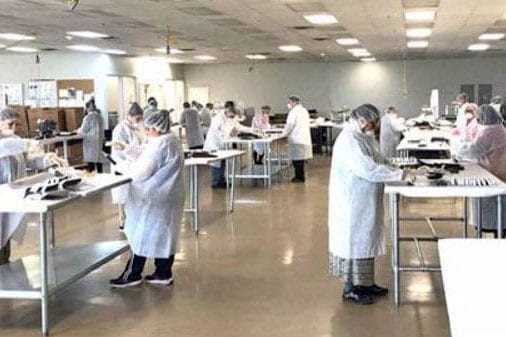 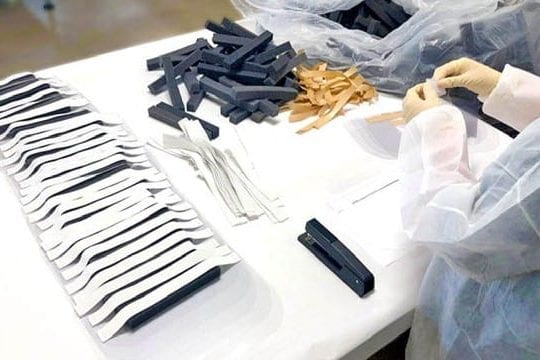 Production workers at Sweet Shop USA have shifted from cutting and decorating intricate pieces of chocolate to assembling face shields to protect health care workers. When the owners began spreading the word, they pre-sold almost 300,000 in the first three days. “We love chocolate, but the Lord has made this possible for us. He gave us the idea, and He has provided the tools. We have the connections, and we have the labor and the staff to do it.” Submitted photos

“We’re basically assembling them. We’re getting the plastic that’s cut, and we’re gluing the foam on the inside of the shields. Foam is something we have a lot of because we use it sometimes to pack things in,” she said.

“Then we have the elastic that goes around the back, and we’re attaching that to the side of the mask. Everything is very manual. The only thing that the machine is really helping us do is seal the plastic. We put each shield in a plastic sheath, and we have a glue thing that seals that for us and we hand put it into the boxes.”

Many of the company’s production workers are accustomed to cutting chocolate and decorating intricate pieces, so they are able to delicately work with their hands, she said, adding “They’re doing a fantastic job.”

As long as they’re able to get the plastic, which is in short supply, Moss said Sweet Shop USA can make up to 40,000 shields per day. Meanwhile, the factory is still making chocolate.

“We’re not looking to get into another business at all,” Moss said. “We love chocolate, but the Lord has made this possible for us. He gave us the idea, and He has provided the tools. We have the connections, and we have the labor and the staff to do it.”

Moss said they’ve been “blown away” by the response from hospitals in desperate need of something they can provide.

“We’re just very humbled and grateful to the Lord that we can help our health care workers that are on the front lines so they can be confident. Plus, we have work for our employees during this slow time,” she said.

Todd Kaunitz, lead pastor of New Beginnings Baptist Church in Longview, told the TEXAN it’s “overwhelming to see how God is using the Moss family during this time of crisis.”

“I truly believe that the greatest way followers of Jesus can advance God’s mission is by leveraging their vocation,” Kaunitz said. “Michael and Angie have taken this to another level. Through this effort, not only are they able to meet a definitive need within the medical community, they are displaying the love of Jesus in a tangible way.”

(EDITOR’S NOTE – Erin Roach is a writer in Nashville.) 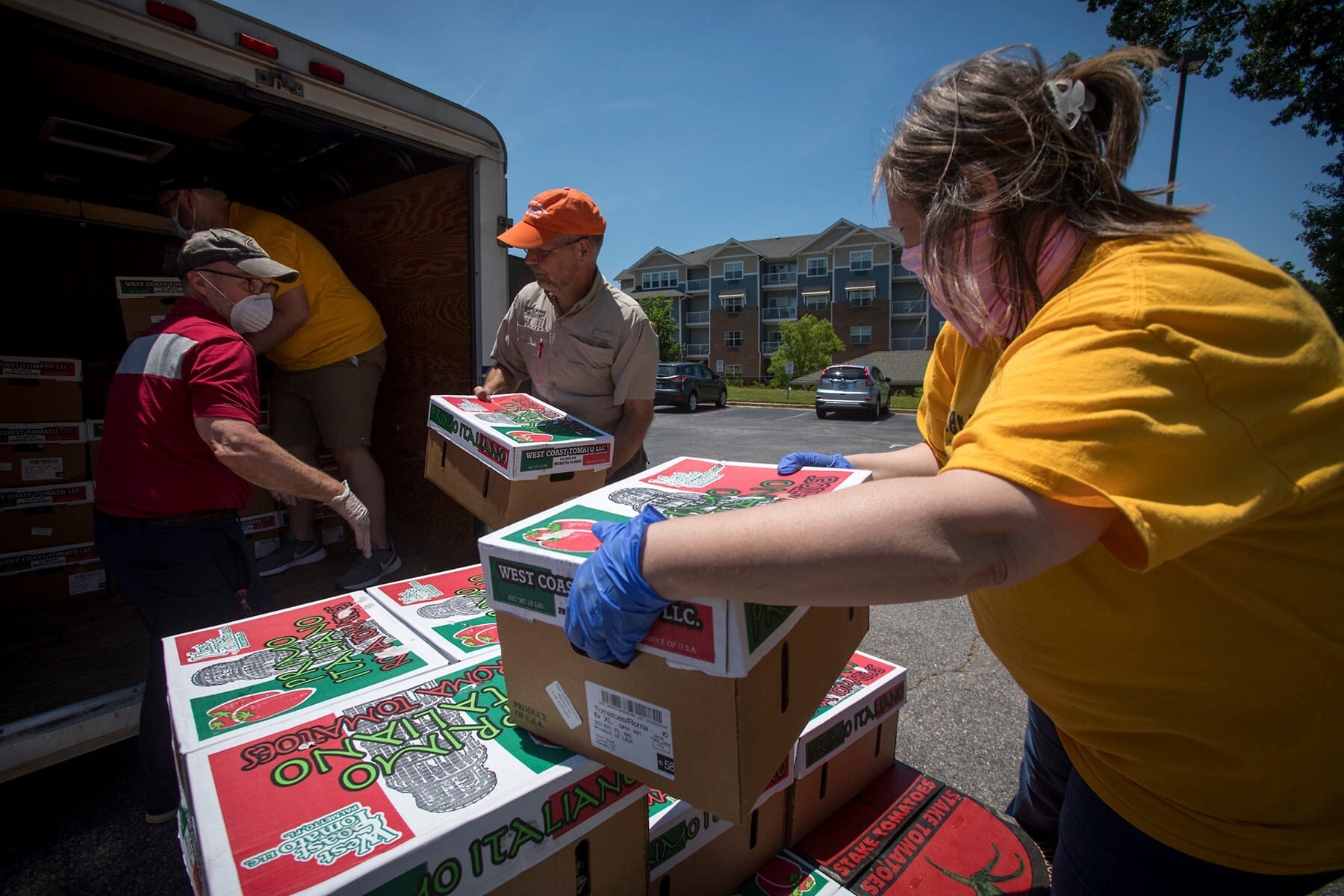 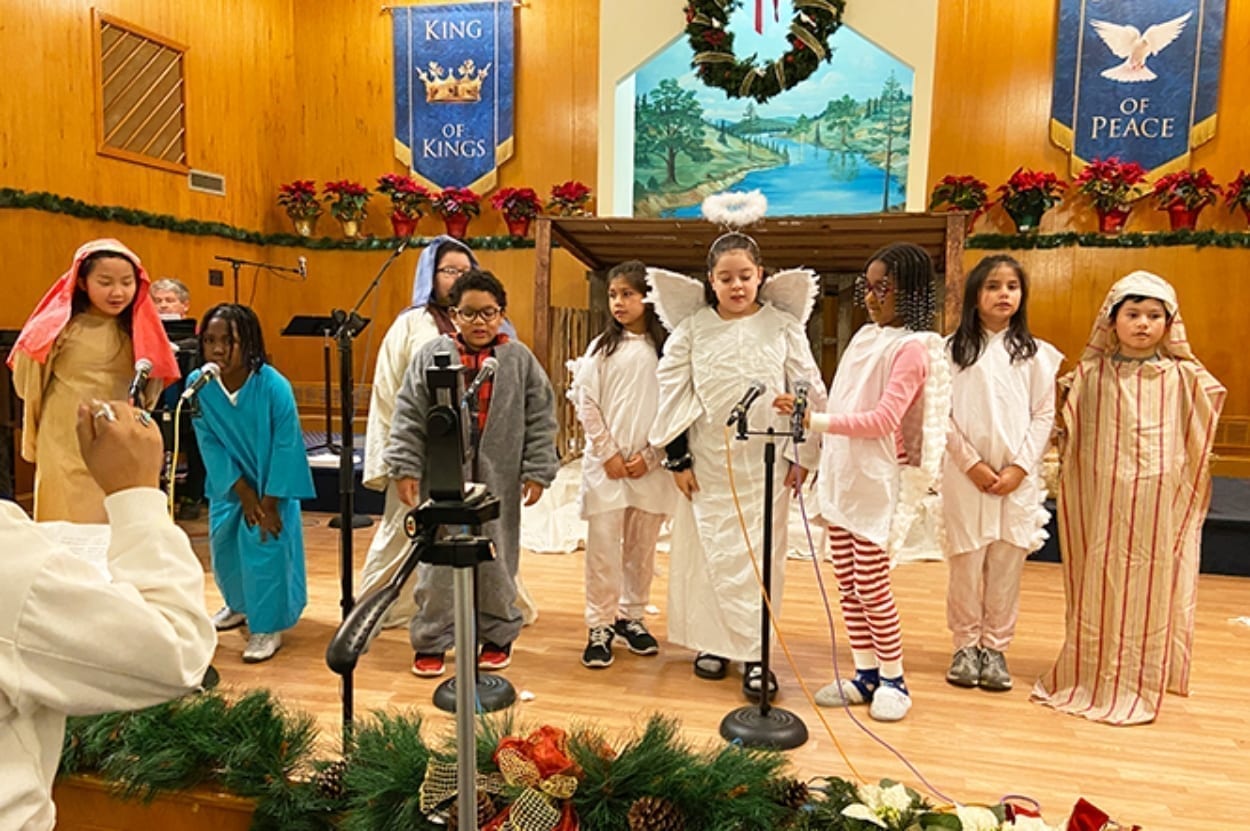