As the overwhelming majority of the country experienced a blast of Arctic air, Southern Baptists joined others in helping weather the cold.

Several Texas churches are serving as warming shelters after a spike in the power grid put millions in the dark, and more to the point, without heat.

Deacons Pete Nichols, Robert Wheat and David McGinnis haven’t left Skyline Baptist Church in Killeen since Feb. 14. In that time, they’ve been maintaining the church’s gym as a warming shelter alongside a handful of city employees.

“We have a place for them to stay and aren’t going to push them out the door in this weather,” said Nichols, a native of upstate New York who hasn’t seen temperatures this low since moving to Killeen 28 years ago.

At least 15 have died from the winter storm that sent temperatures plummeting for days and crippled travel with ice and snow. Those deaths have occurred from crashes, but also carbon monoxide poisoning from attempts to stay warm as well as a tornado that struck coastal North Carolina.

Approximately 35 people, including four families, are staying at the church. Last year Nichols, Wheat, Senior Pastor Ashley Payne and his wife Stephanie attended training sessions that certified Skyline as a shelter for emergencies.

“The city has a building for that use but had to close it down due to a sewage problem,” Nichols said. “So, they called the church. We have staff members staying overnight with the city employees as well as an armed police officer. Our security team is present too.”

On Feb. 15 and 16, the church provided breakfast and lunch. The city’s soup kitchen will be at Skyline for the next few days.

In Waco, Highland Baptist Church also opened as a warming shelter. During the early stages of the COVID-19 pandemic the church had been an emergency food and supply provider.

“We have hosted around 60 people today and expect more tonight as the weather continues to worsen,” said Mary Claire Brock, the church’s communications director. “Members have been taking shifts around the clock since Monday evening and will do so until Thursday morning to host and pray for guests on campus.”

While snacks and water have been provided by the church so far, members have offered to bring hot meals for guests tonight, Brock said.

While Highland’s doors were open Sunday for in-person worship, it has since moved all campus activity online.

First Baptist Farmersville Pastor Bart Barber slept on the couch in his office as part of the crew of church members hosting seven families on its campus. One of the biggest requests, he said, has been for hot showers.

“A lot of people are fighting a battle with freezing pipes,” he said. “When the sun comes up, they may take an hour to come to the church, get a hot shower, eat a hot bowl of soup and get a respite before going back home.”

Church members Larry and Kerrie Patterson needed a place after their electricity went out. When they asked Barber about staying at the church, he said sure, then congratulated them on being the shelter managers. “Every volunteer we have serving is either a staff member or volunteer/client,” he said.

Preparation for the cold temperatures began earlier for many congregations. In Oklahoma, Pastor Duncan Blackwell of Bethel Baptist Church in Anadarko told The Baptist Messenger that those steps are designed “to share the light of Jesus in our community in this challenging time.”

“We knew this bitterly cold weather would be hard on the homeless in the community, as well as other people who are vulnerable in a situation like this,” he said.

Initial discussions over how to provide food, perhaps through a soup kitchen, quickly grew on social media to include others’ involvement from the community. Bethel’s campus would serve as the shelter, with area churches helping supply items such as blankets, coats, pillows, fitted sheets, air mattresses and food.

At least one salvation came about from the effort, Blackwell said.

“One person who was staying with us had no power. She showed up the first three nights of the kitchen and then stayed [at our church shelter] Saturday night. We planned to livestream our service and invited all there to attend. She and others came to the service. God moved in her heart, and she repented of her sin and professed faith in Jesus Christ.” 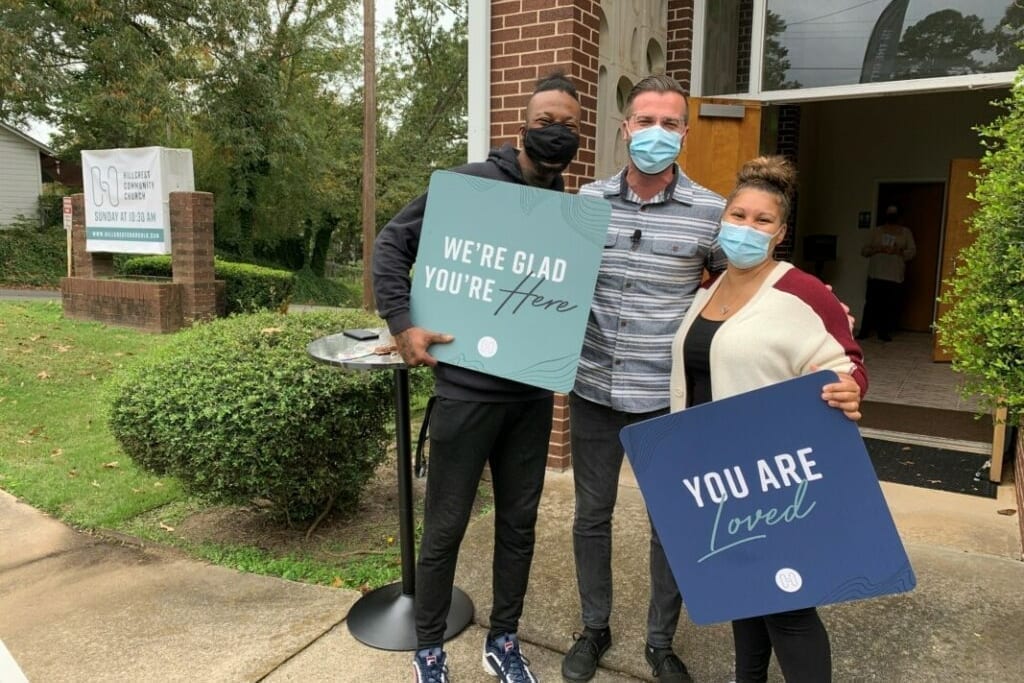 Two churches become one with a vision to reach their community