Located in what he describes as the most secular neighborhood in western North Carolina, Branton Burleson wants to create a local church culture that forms “gospel fluent” community members.

Burleson, pastor of Grace Baptist Church in Asheville, wants church members to ask themselves, “How do I live as a missionary disciple throughout the week, wherever I am?”

So he started weekly evangelism classes this spring. Grace Baptist was already holding gatherings on Wednesday evenings – an informal time to share testimonies and fellowship, so he used it to provide people with tools for evangelism. The classes are modeled after 9Marks evangelism workshops.

In the first week of the training, Burleson challenged attendees to consider what it would take to reach someone they have on their heart. Referring to 1 Corinthians 9:19-23, he said, “What is it going to take of us? What does it require of us to reach people?

Burleson and Ross Smith, pastor of worship and families at Grace, have made it a priority to bring the gospel to their immediate neighbors.

“It’s a very pedestrian neighborhood around us, densely populated neighborhood, homes are close together.”

So their families live within walking distance of the church.

“We’re living in the middle of the lostness,” Burleson said.

Grace members also have a new opportunity to apply their evangelism training at the weekly West Asheville Tailgate Market, which is located in the church’s parking lot from April to November. Hundreds come through the church property on Tuesday afternoons to buy produce, plants, local art and other products from different vendors.

The market reopened April 6 after a winter break, with Grace Baptist hosting their own booth.

“We want to have members of our church who are equipped to think evangelistically, to start gospel conversations with neighbors in our community who are here to shop, but we’re here to be a presence of Christ,” Burleson said.

They’re coming up with ideas for resources to share and to engage the public in spiritual conversations. From previous interactions with locals, Burleson knows there’s a diversity in beliefs and worldviews in their community.

He has met some people who seem “hostile” to the gospel.

“That’s not probably the majority, but I think it’s something to be aware of. We are living in less nominally cultural Christian times.”

Some are processing hurtful experiences from growing up in church, and many are “spiritual, not religious.” Burleson has also noticed a growing number of “outright Paganism” and a large pantheistic presence in West Asheville, likely due to their location in the mountains. Some residents move there to be close to the nature they think of as a god, he explained.

“I think it’s important … that all of our churches need to increasingly think as missionaries in a cross-cultural context,” Burleson said. “Because that’s really kind of where we are now.”

Burleson offered three key tips for other leaders who want to emphasize or re-emphasize evangelism efforts in their churches.

Pastors and leaders can learn from others who they find are already evangelizing well; leadership must model a lifestyle of evangelism to their congregation; and members can help each other by talking about their own experiences.

“In general, I don’t think members will be any more evangelistic than their leadership,” Burleson said.

“Evangelism is contagious … I want to increasingly encourage all of us – myself included – to be able to come with stories and names of real people that we are engaging with gospel conversations between training or teaching time.

He referenced a predicted trend for churches in 2021. According to Thom Rainer, founder and CEO of Church Answers, nine out of 10 North American congregations will identify as needing revitalization as they come out of a pandemic era. Pastors should be aware of this reality, Burleson said.

“There was a time when we could just exist and have a church. You got a building, you got a sign, the doors are open … somebody’s gonna show up. I think those days are quickly going away, and I think that the churches that will survive and certainly thrive are the ones that are aggressively evangelistic.”

In Summerfield, First Baptist Church pastor Kelly Bullard recognized a need for a renewed focus on evangelism in 2021. After a challenging year, “so many people are asking questions, searching for hope and purpose,” he said.

“The opportunities – they’re always there, but people obviously are in a unique season of life.”

Bullard became senior pastor of FBC Summerfield in October after serving as senior pastor of Temple Baptist Church in Fayetteville, where the North American Mission Board’s (NAMB) Who’s Your One evangelism tour first kicked off in August 2019.

He continued to utilize Who’s Your One resources at Summerfield and wrapped up a four-week evangelism sermon series on March 28. FBC Summerfield dedicated 30 days to praying for more than 100 ‘ones’ – names of individuals members hoped to reach with the gospel.

Summerfield has especially emphasized evangelism as a multigenerational ministry. Earlier this spring, only days apart, Bullard heard from one member about her 88-year-old father coming to faith, and from a 9-year-old who led his neighbor to Christ.

He encouraged staff to implement church-wide evangelism initiatives in their ministry areas, so that all members – from children to senior adults – are thinking about their “ones.” They published a series of five videos of staff and lay leaders sharing their own experiences with and tools for evangelism and prayer.

Who’s Your One cards are displayed in central locations throughout Summerfield’s campus as reminders for people to regularly pray for their ones.

Bullard hopes the displays bring “conscious awareness to keep the whole idea of your ‘one’ … and help our people understand to invest in your one and be intentional with your one.”

He challenges them to find ways to connect their ones to ministries and outreach opportunities at the church, and “that until your one comes to Christ, they are your one. And then you have another one.”

And then he asks, “Who’s your next one?” 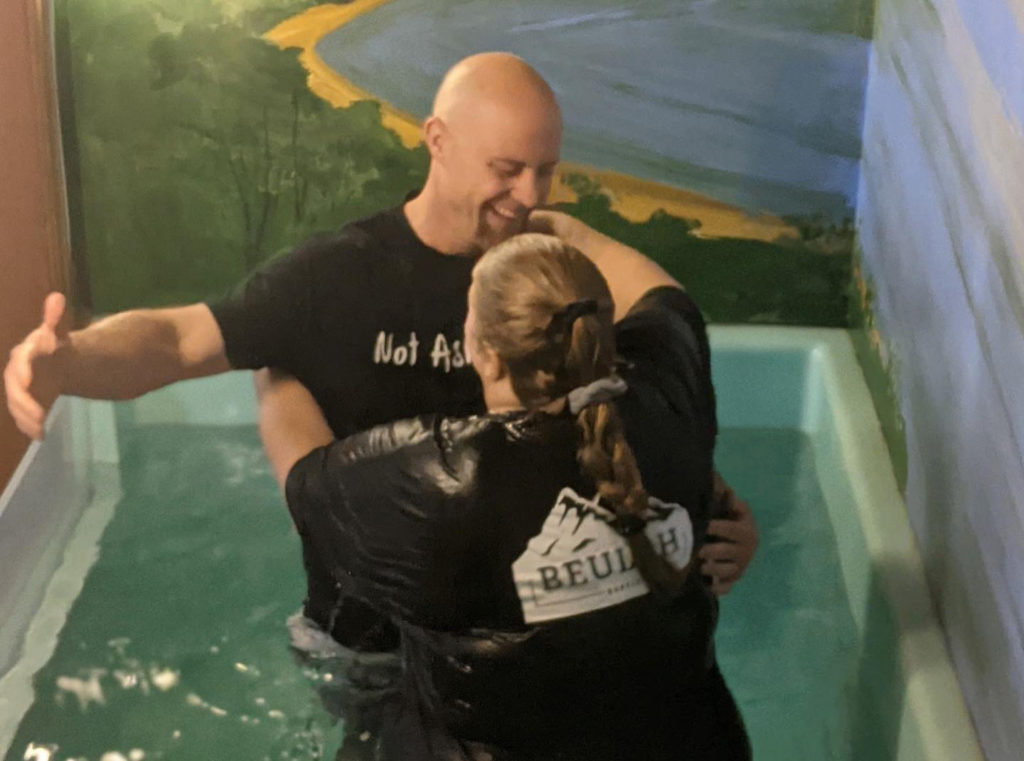 Dry baptistry becomes a prayer closet, then gets a flood of new believers