Adam W. Greenway completes his first year as president of the Southwestern Baptist Theological Seminary (SWBTS) encouraged by the reception he has found within the seminary community and the broader family of Southern Baptists.

“I believe with every fiber of my being that the best days at Southwestern Seminary are in the windshield and not the rearview mirror,” he told the TEXAN during an interview while attending a gathering of state convention executive directors and editors in Tucson, Ariz.

“We’re already seeing some signs of that,” he noted, pointing to the double-digit increase in new student enrollment over the spring semester of 2019. “In terms of early signs of admission growth, morale and internal and external dispositions toward the seminary, I’m very encouraged.” While continuing to work to connect with prospective students, Greenway said efforts also are underway to grow the undergraduate programs of Scarborough College.

In SWBTS’s chapel service Feb. 27, Danny Roberts, chairman of the presidential search committee, recognized and prayed over Greenway on the one-year anniversary of his election as president. Roberts rejoiced that, though “it’s been a great year” and “God has done some amazing things,” “it’s only just begun, and the best days of Southwestern Seminary are out ahead of us right now.”

Following Roberts’ prayer, Greenway invited his wife Carla to join him on stage, and he shared that “it has been the greatest year of our married life and of our ministry to have served as your president now for one calendar year.” He added that he could not be president at Southwestern “if not for the president’s wife, Carla Greenway.”

In his interview with the TEXAN earlier this month, Greenway said he has been blessed in the past year by a “sense of connection and bond back toward Southwestern and the seminary from alumni across the generations.” As the school with the largest alumni base among the six Southern Baptist seminaries, he sees that as an extraordinary resource to support Southwestern by sending students and providing connections to potential financial supporters.

Last year’s launch of the B.H. Carroll Center for Baptist Heritage and Mission set the stage for this spring’s Baptists and the Bible conference to commemorate the 40th anniversary of the publication of the book of the same title authored by two then-SWBTS professors, Tom J. Nettles and the late L. Russ Bush.

“Continuing to work to develop and strengthen that center as a resource advocating for the best of our Baptist history, heritage and identity” benefits the denomination by providing a way forward for cooperative work, Greenway said. “I certainly have a strong interest in helping to advocate for what I think is the genius of being Southern Baptist, what it means for our convictional heritage and our cooperative methodology,” he explained.

The role scripture plays in authoritatively guiding and directing the efforts of Southern Baptists remains a challenge Southern Baptists must embrace, he said. “That’s why I make the point emphatically that the Bible is the core textbook in every class at Southwestern Seminary. It’s not just that we affirm its truthfulness, we affirm its authority in terms of guiding all that we do and it is the source from which we carry out our work as Christians and as pastors and churches.”

Asked what other objectives he would pursue if money were no object, Greenway spoke of a desire to undergird the academic program with a fully-endowed faculty chair in every core discipline of the seminary.

In the broader sense of contributing to a sense of unity within the SBC, Greenway recalled the big-tent vision he articulated following his election as president. “At our best we are committed to a high view of scripture, confessional fidelity, the Great Commission and cooperation. Every time we have the chance to direct the conversations back in that direction, and to remind us of what called us together as a convention of churches in 1845, what brought forth the Cooperative Program in 1925 and here in 2020, I think that’s a way forward when there are always voices that want to take us in tangential directions or who want us to give a lot of time and energy to other matters.”

He continues to remind Southern Baptists to stay focused on evangelism “working as much as we can to make it humanly impossible for anyone to die and go into a Christ-less eternity because we didn’t share Christ with them.” As a belief in the truthfulness of scripture drives missiological work and engagement, Greenway said, “We don’t just stand there. We do something.”

He thanked faithful Baptists in the pew and state convention partners like the Southern Baptists of Texas Convention who make the ministry of SWBTS possible.

“We cannot do what we do apart from you, and at the end of the day we are always accountable to and desire to come along and be a servant of the churches of the Southern Baptist Convention.” 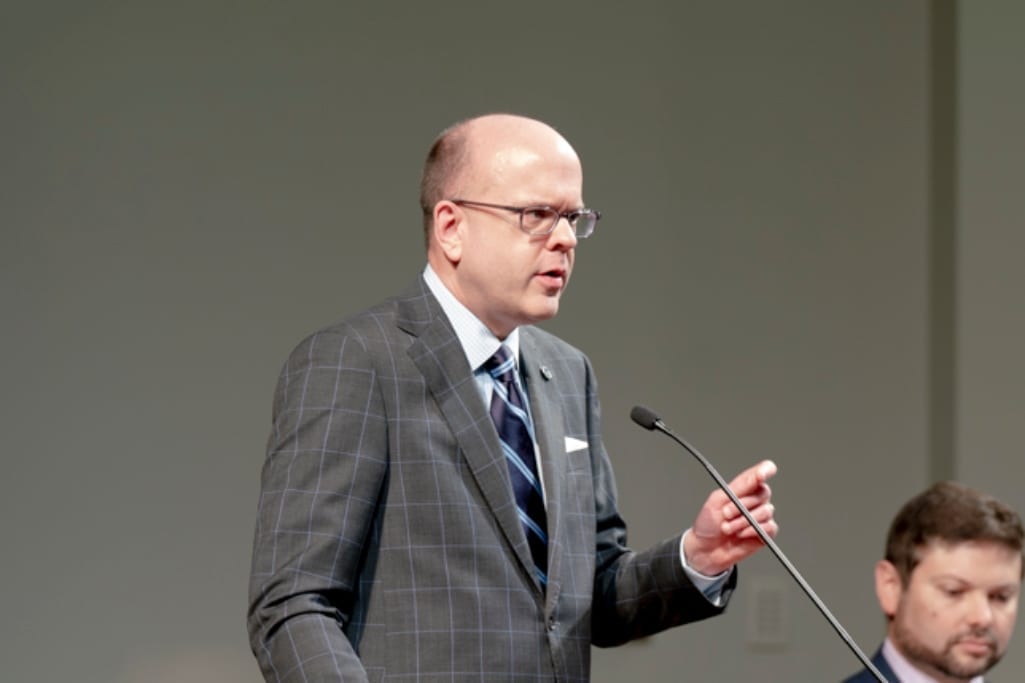