Allen Murray remembers the scene at Centerville Baptist Church in Kelly, N.C., after he became the church’s pastor in October 2018.

It was just one month after Hurricane Florence made landfall in North Carolina, causing catastrophic damage due to severe and life-threatening flooding. The slow-moving storm remains the wettest tropical cyclone to ever hit the Carolinas, dumping between 20-30 inches of rain in many parts of southeastern North Carolina.

With Kelly and many of the surrounding communities flooded, Centerville Baptist Church served as a staging ground for disaster relief volunteers with N.C. Baptists on Mission, an axillary of the Baptist State Convention of North Carolina (BSC).

Centerville’s fellowship hall was lined wall to wall and nearly floor to ceiling with supplies. Hallways leading to the church’s Sunday School classrooms were also filled. A steady stream of people from the community came through the church parking lot to receive much-needed food, water and personal items.

Meanwhile, disaster relief volunteers – donning their recognizable and familiar yellow shirts – canvassed the region, helping people put their lives back together by removing debris, cleaning out flooded homes and helping a community rebuild.

“In the year and a half to follow, dozens upon dozens of yellow shirts and hats would come through our doors for meals, showers and a place to sleep as they were the hands and feet of Jesus in our community and many other nearby communities,” Murray said. “These people came from all over North Carolina and the United States. They were there because of not only their generosity, but also because of the North Carolina Baptists who had given to the North Carolina Missions Offering.”

The North Carolina Missions Offering (NCMO) is an annual offering that funds a number of significant missions and ministry efforts in the state and beyond. Disaster relief may be the most visible, but it’s just one of the many ministries supported by the NCMO. The offering supports 19 different ministries of N.C. Baptists on Mission, church planting, mission camps, associational projects and missions mobilization through various partnerships.

Churches may give to the offering year round, but it is typically emphasized in September. The offering goal and allocations are proposed each year by the state convention’s budget committee and ultimately approved by messengers attending the N.C. Baptist annual meeting in November. This year’s offering goal is $2.1 million.

Centerville Baptist Church ranked among the top 50 churches in NCMO giving in 2021 and was the leading contributor in its association.

“Not all special offerings are an easy sell to pastors and their congregations, but because of the faithfulness of Baptists on Mission, I’ve never had any hesitation to ask our church to give,” Murray said. “Not only that, it is such a blessing to know that the NCMO is going to make an impact across North Carolina and the world. It will also make an impact here in the Cape Fear Network of Baptist Churches as a portion is given back to the local association.”

On the other side of the state, West Asheville Baptist Church is also a leading contributor to the NCMO, ranking in the top 20 last year. West Asheville’s pastor Stan Welch says when people think about missions, they often think first about international or North American missions.

“But I think it’s also important to look at our own state, as well,” Welch says. “There are a number of different ministries that are supported through the North Carolina Missions Offering, and they often reach outside our borders.”

While several members of West Asheville actively serve as disaster relief volunteers, Welch has also led missions teams from his church to Haiti, Honduras, South Africa and other places where N.C. Baptists have missions partnerships. Many of those partnerships are supported through the NCMO, and they are designed to get people actively involved in missions.

“Healthy churches are on mission,” said Paul Langston, a missions mobilization consultant with N.C. Baptists on Mission. “An ‘on mission’ church helps members of all ages move out of their seats and into the streets.”

Left, women from Biltmore Baptist in Asheville travel to Lumberton once a month to hand out quilts, hugs and prayers. Right, NCMO supports church plants like Shine Community Church in Selma, N.C.

Through its ministry partnerships in North Carolina, North America and around the world, Langston said Baptists on Mission offers churches many avenues to mobilize their members to serve. That could mean things like assisting church planters in New England or Armenia, teaching children in Pennsylvania or Hungary, serving on construction teams in the Rocky Mountains or South Africa, and more.

Welch also cited church planting as one of the important ministries supported by the NCMO.

“With the influx of various people groups in North Carolina, church planting needs are great in our state,” Welch said.

Mike Pittman, BSC church planting strategist, said studies show that new churches are effective at reaching those who don’t currently attend church. Pittman and other N.C. Baptist strategists work with existing churches from the mountains to the coast to help them become a church that plants other churches.

On average, the NCMO helps provide monthly funds for approximately 50 to 60 new church plants per year in cities and towns across the state. More than three-fourths (76%) of those new churches identify as ethnic congregations, Pittman said. In the past year, church planting strategists have trained 102 new prospective planters.

“Our goal is to catalyze a reproducing church movement in partnership with N.C. Baptist churches from the mountains to the coast,” Pittman said.

West Asheville Baptist Church is affiliated with the Buncombe Baptist Association in western North Carolina. When churches like West Asheville and others contribute to the NCMO, they are also supporting local missions and ministry efforts in their own region.

Each year, 10% of the funds contributed to the NCMO are returned to the local Baptist association from which they came to support special projects.

Perry Brindley, associational mission strategist for the Buncombe Baptist Association, said one of the projects those funds support is annual outreach and evangelism efforts at the Western North Carolina state fair every fall. The fair ministry is a partnership between seven different associations and almost 30 churches.

Brindley said the outreach involves several hundred volunteers providing meals for fair workers and sharing the gospel with workers and attendees over the course of the 10-day event. The outreach has taken place for more than 30 years.

Additionally, Brindley said NCMO funds have also helped fund ministry partnerships with an area pregnancy resource center and a local chapter of the Fellowship of Christian Athletes. The association has also been able to assist refugees settling in Buncombe County in the aftermath of Russia’s invasion of Ukraine earlier this year.

“Annually, the Buncombe Baptist Association is blessed to have a number of church families that participate in the NCMO and give generously,” Brindley said. “The NCMO allows the association to extend special opportunities to the local church that expand gospel impact in each local community.”

A place to show up and serve

Robbie Alexander serves as the coordinator of a mission camp in Shelby. It’s one of two such camps operated by N.C. Baptists on Mission. The other is located in Red Springs.

“Like a lot of areas, Shelby has many people with many different types of needs,” Alexander said. “And we’re hoping that we can use our facilities to minister to them.”

The NCMO supports the work of these mission camps, which provide a variety of ministry and service opportunities for churches. Camp staff work with area churches, other ministries and local agencies to identify projects, which could range from coordinating Backyard Bible Clubs to engaging in various construction projects.

“Anything that a church would have a desire to serve in, we can set up projects for you to do that,” Alexander said.

The mission camps have the capacity to house and feed volunteers. Camp staff also provide any tools and equipment that are needed. Essentially, all churches would need to do is show up and serve.

“The goal of our camp is to raise up churches and get them involved in missions,” Alexander said. “And hopefully the teams that are coming to serve with us would catch a passion for it, and hopefully then send them out from here to do more.”

Rick Speas, pastor of Old Town Baptist Church in Winston-Salem, says supporting the NCMO is just one way his congregation seeks to respond to the Great Commission through an emphasis on local, state, North American and global missions, as outlined in Acts 1:8.

Old Town contributed more than $21,000 to the NCMO in 2021, which ranked third among all churches in the state. Old Town is also a strong supporter of the Lottie Moon Christmas Offering for international missions and the Annie Armstrong Easter Offering for North American missions.

“We keep missions in front of our people all the time for our own Jerusalem, Judea, Samaria and to the ends of the earth.”

Speas said keeping the awareness level high involves sharing with the congregation how their gifts to NCMO make it possible for N.C. Baptists to respond to events like natural disasters or the crisis in Ukraine. Several members of Old Town are directly involved in those efforts through disaster relief and other ministries. Earlier this year, Old Town’s missions pastor Mark Harrison served as chaplain on a medical team that traveled to minister and serve in Ukraine.

Speas said every ministry of the NCMO impacts lives for Christ, which makes support of the offering worthwhile.

“Behind every dollar, there’s a life that’s touched,” Speas said. “And they’re being touched with the gospel and the love of Jesus.”

(EDITOR’S NOTE – Chad Austin is the managing editor of the Biblical Recorder.) 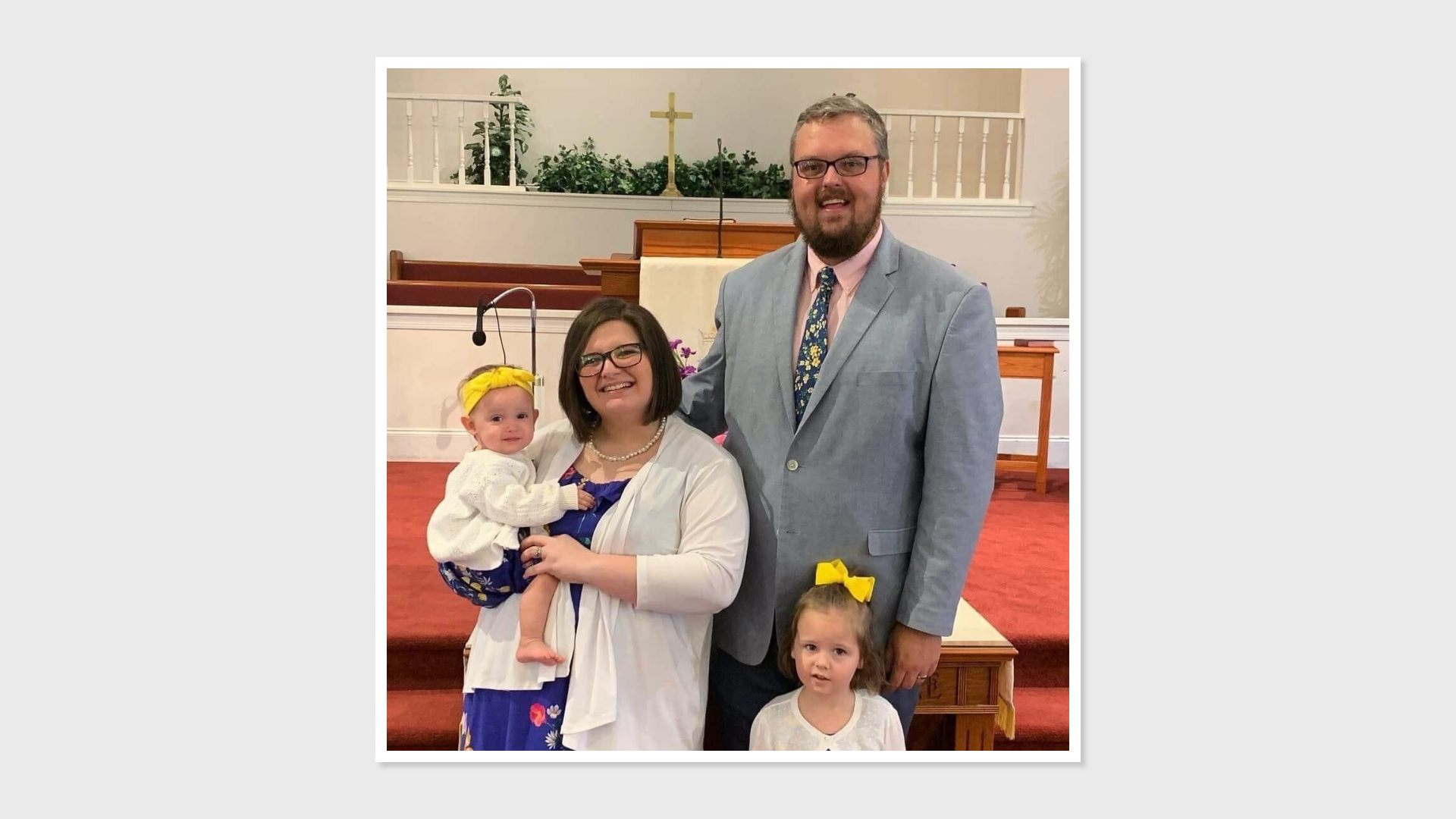 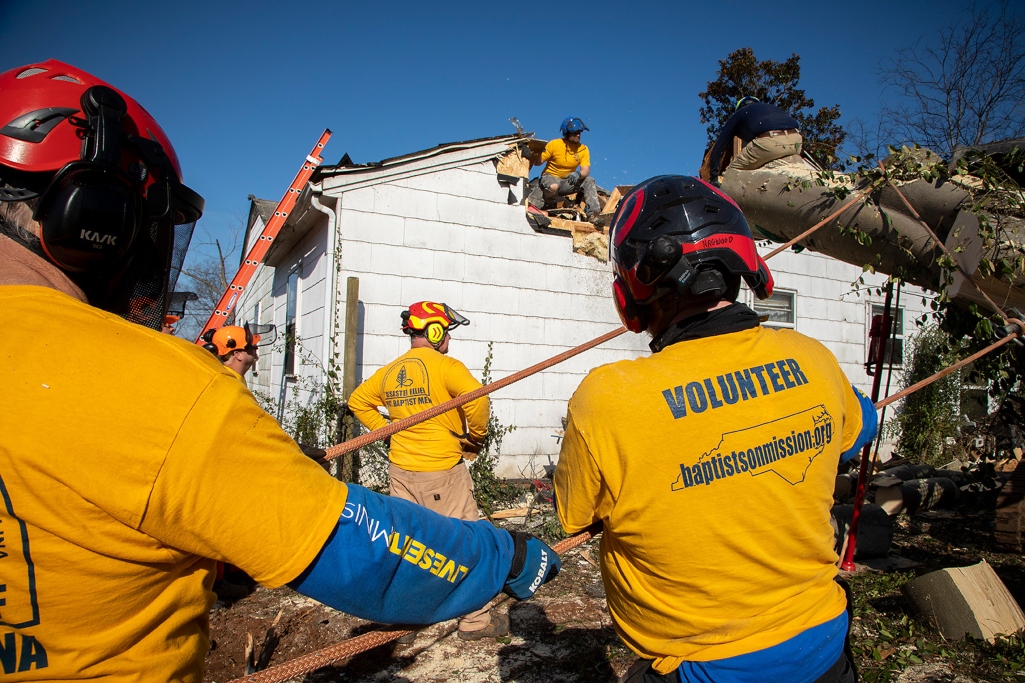