Military wives ‘have their cup filled’ at WMU retreat

Military wives and families “share their loved one with the world,” said Mary Gray, a former military wife and current military family advocate. She is committed to serving the families of those she calls “the sons and daughters of America.”

One practical expression of Gray’s commitment is her involvement in the annual Military Wives Retreat hosted by Woman’s Missionary Union of North Carolina. For each of the retreat’s six years, Gray has served as its main Bible teacher. This year, 21 military wives and 13 volunteers participated in the retreat, held at North Carolina Baptists’ Camp Mundo Vista Aug. 14-16. Attendance was less than half of recent years due to the coronavirus pandemic.

Gray, whose husband and two of her sons have served in the military, relates to the daily needs and challenges faced by other military wives and mothers.

She seeks to provide “spiritual food from God’s Word that they can take back with them to give them the strength and the comfort and the power and the peace that they need when they return,” she said.

Each year, Gray seeks God’s guidance about what will “reach these particular women at this particular time,” she said, adding, “This year, God laid it on my heart to really talk about the power we have in prayer.”

Many military wives “are dealing with some major challenges,” she said, “because they’re caregivers to some of our military who have been wounded, either emotionally, physically, one way or another, that are struggling. When you’re a caregiver to someone like that, you need those breaks to take care of yourself and just focus on yourself.”

Stephanie Trost has attended five of the six annual retreats, missing one when her husband had his leg amputated at Walter Reed National Military Medical Center four years after being shot multiple times during an attack in Afghanistan. 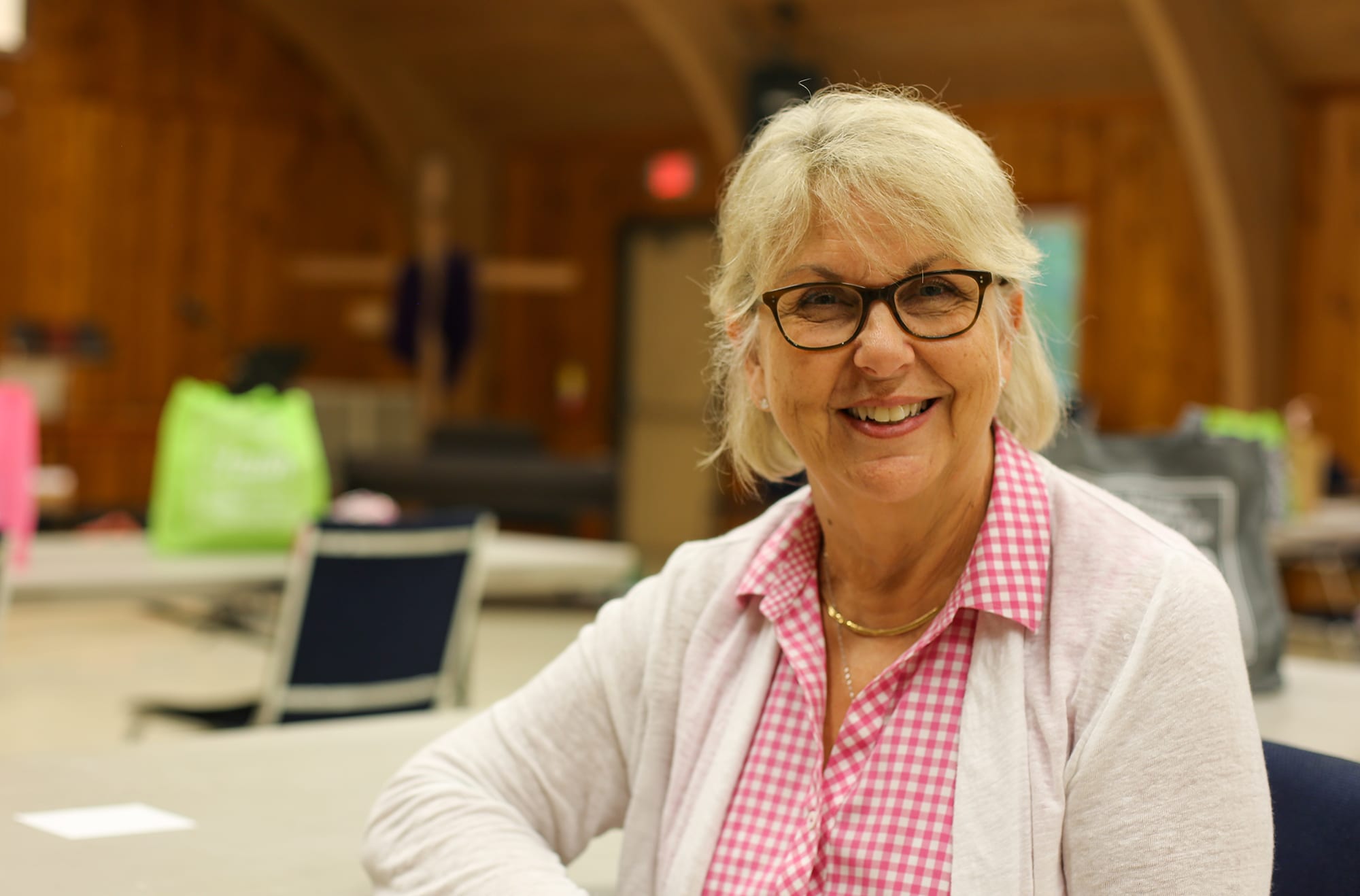 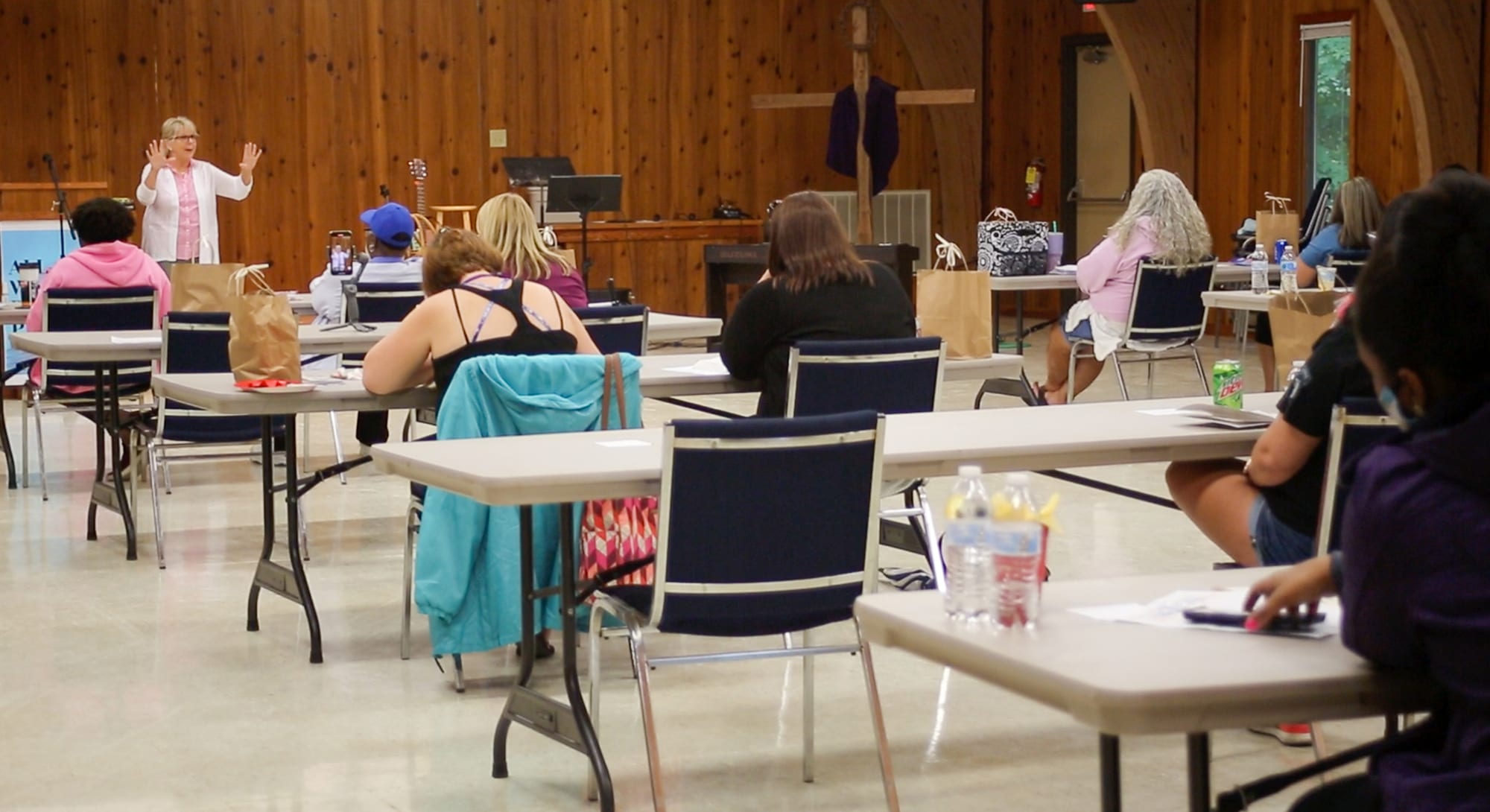 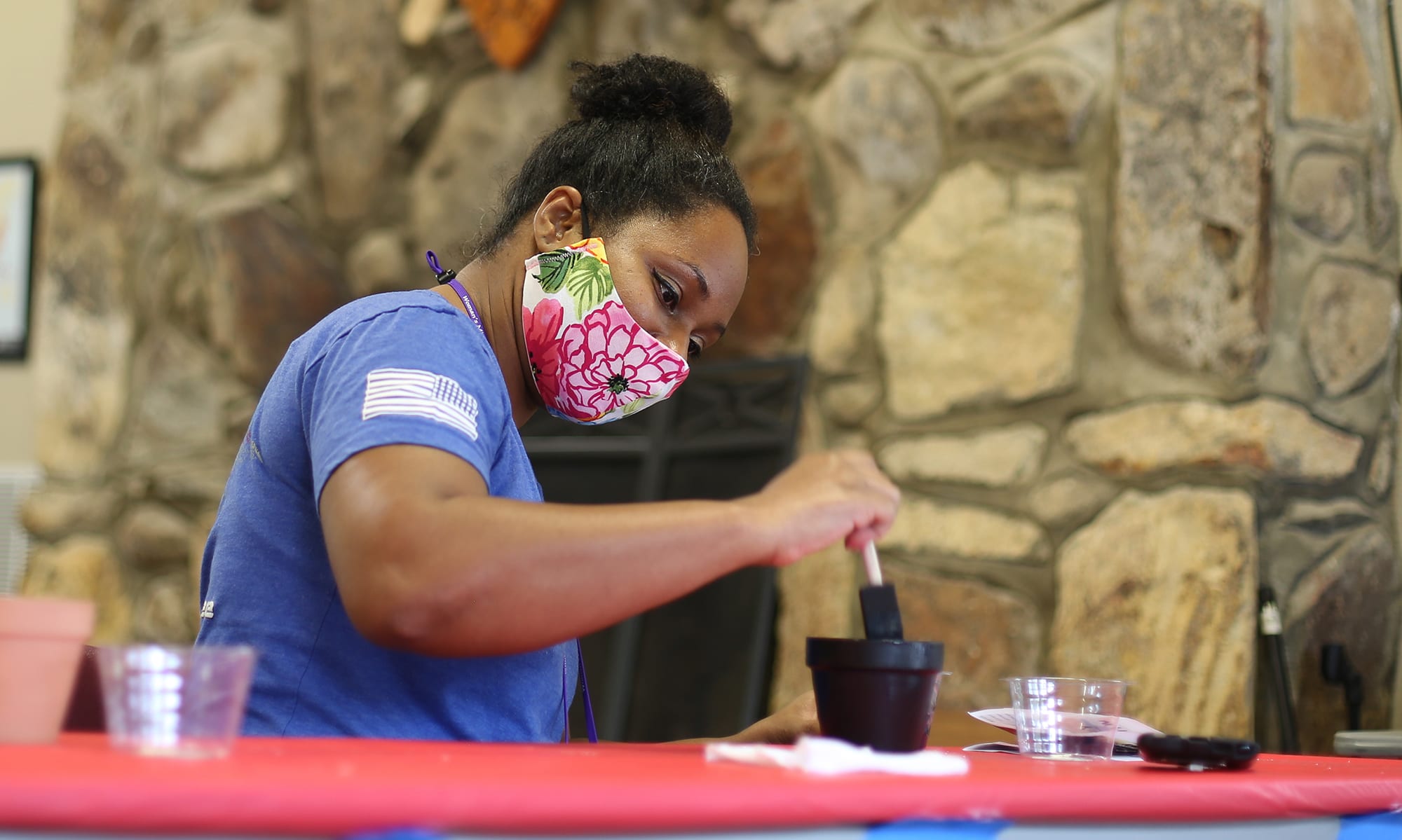 WMU photos by Pam Henderson
Mary Gray, a military wife and mom, leads a Bible study at the WMU North Carolina’s annual Military Wives Retreat. Bible studies, zipline tours, and craft projects, such as the one participant Martha Knight is shown working on, are designed for spiritual, physical and emotional renewal.

Trost’s husband is a 32-year Army veteran, whose injuries and years-long recovery and rehabilitation caused “a major, major change for us” that led to several “really dark years for us,” she said. Shortly after his injuries, she gave up her career as a bank vice president to focus on his physical and emotional needs.

The Military Wives Retreat provides Trost with a much-needed respite. She “fell in love with the ladies that run this retreat,” she said, adding, “They are just the sweetest, kindest, caring women I’ve met. They’ve stayed in touch with me after and continue to follow up with things that are going on with us at home. I’ve made great connections with the ladies when I come every year. The spiritual connection is so important because our lives are very intertwined with each other.”

Whether spending a few moments in quiet prayer and reflection at Mundo Vista’s scenic outdoor chapel or taking an adrenalin-fueled zipline ride through the woods, the three-day weekend definitely is a change of pace for harried military wives and moms.

“They have free time if they want to take a nap, read a book, go to the pool,” Gray said. “We have a lot of different activities. They make jewelry; they’re pampered; they’re loved on.”

Margaret Harding, who retired last fall as WMU of North Carolina’s adult ministries consultant, was instrumental in helping establish the retreat. She said the overarching goal was for military wives to be “refreshed and renewed physically, mentally, emotionally and spiritually.”

Beca Lindhout, who succeeded Harding in that role, echoed her perspective. Lindhout said retreat organizers and volunteers want each of the participants to realize that “they are beautiful, strong and loved by God, and in His strength, they can face the year ahead.

“They are a very selfless group of women who put themselves second so often, who are under an enormous amount of pressure that the rest of the world can’t understand when your husband is deployed, when he puts himself in harm’s way for our country. It’s important to give them a place where they can refuel and have their cup filled.”

Encountering God on the mountaintop

Martha Knight is a U.S. Air Force veteran and mother of two young daughters. Her husband, who has served in the military for 20 years, is in Active Guard Reserve with the U.S. Army.

Attending her second Military Wives Retreat this year, Knight admitted she initially had second thoughts after she signed up for last year’s retreat.

“I can’t go. I can’t leave my husband. I can’t leave my kids. The house is going to burn down without me,” she recalled thinking. However, “when I actually came out here for the first time, it was just the most peaceful, relaxing environment. It was awesome coming out here.”

Describing her experience as “different than any retreat that I’ve ever been to before,” she said, “Here, nobody wears a uniform. You don’t have to worry about anybody’s rank.

Yvonne Deatherage, the retreat’s volunteer coordinator, said the entire weekend experience – lodging, meals, snacks and activities such as crafts, swimming and ziplining as well as gift bags and door prizes – is provided at no cost to the military wives.

“Some of them will come with no spiritual background, but when they leave, they have such great testimonies of what the retreat meant to them, not only for physical relaxation, but to be spiritually renewed or to even know that God is truly there for them.”

Calling the retreat “a ministry that is needed immensely,” Deatherage said, “Every state that has a military base should do this, and WMU North Carolina will be more than willing to help anybody get started.

“The more we do it, the more we love it, and the more passionate we are about it. It’s just an awesome experience. I always leave tired, but a good tired. It’s just a blessing.”

WMU groups, churches or others interested in starting a Military Wives Retreat may contact WMU of North Carolina at [email protected] or 919-882-2344. To support the ministry of WMU, give to the Vision Fund at www.wmufoundation.com/vision. 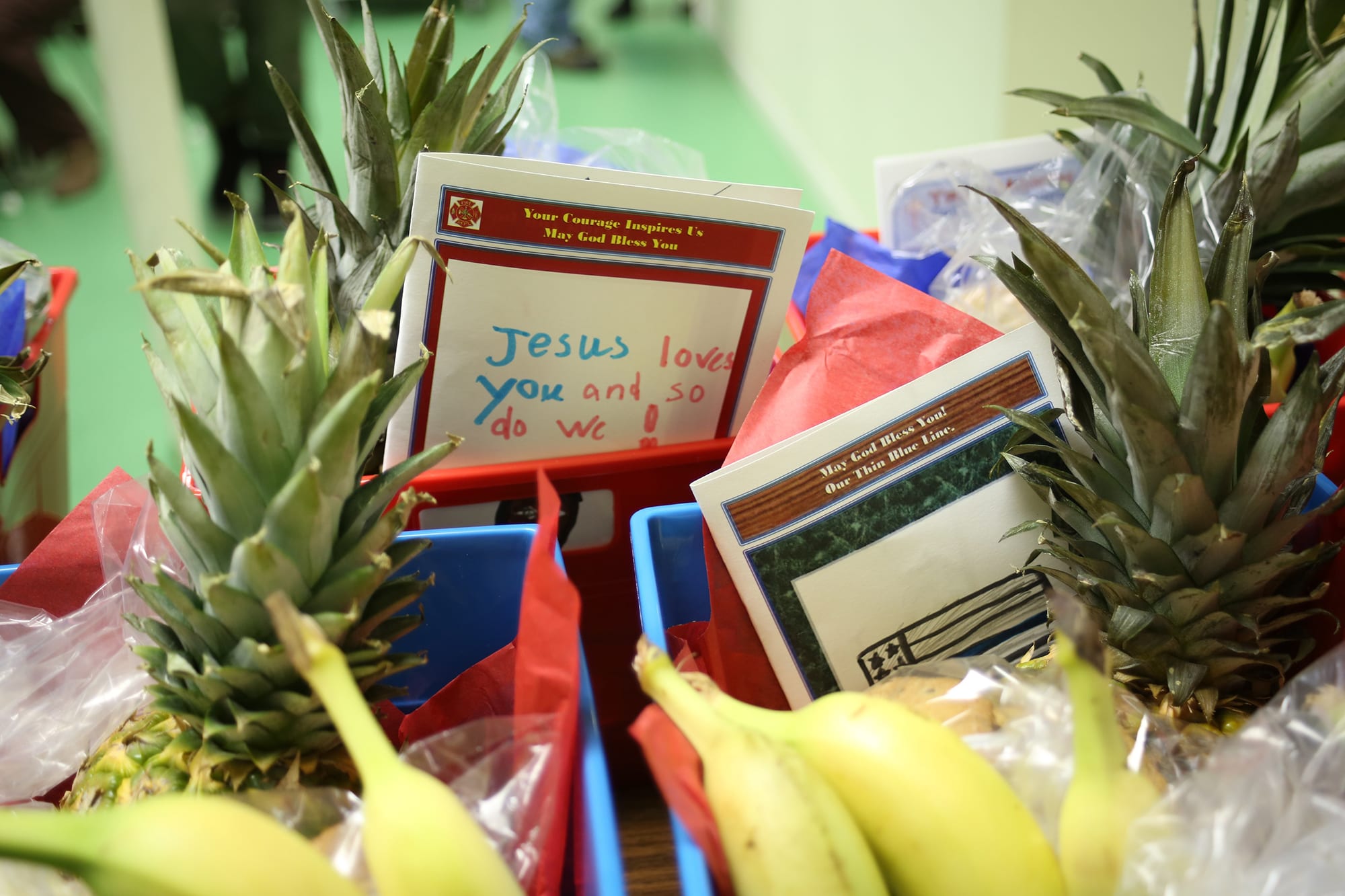 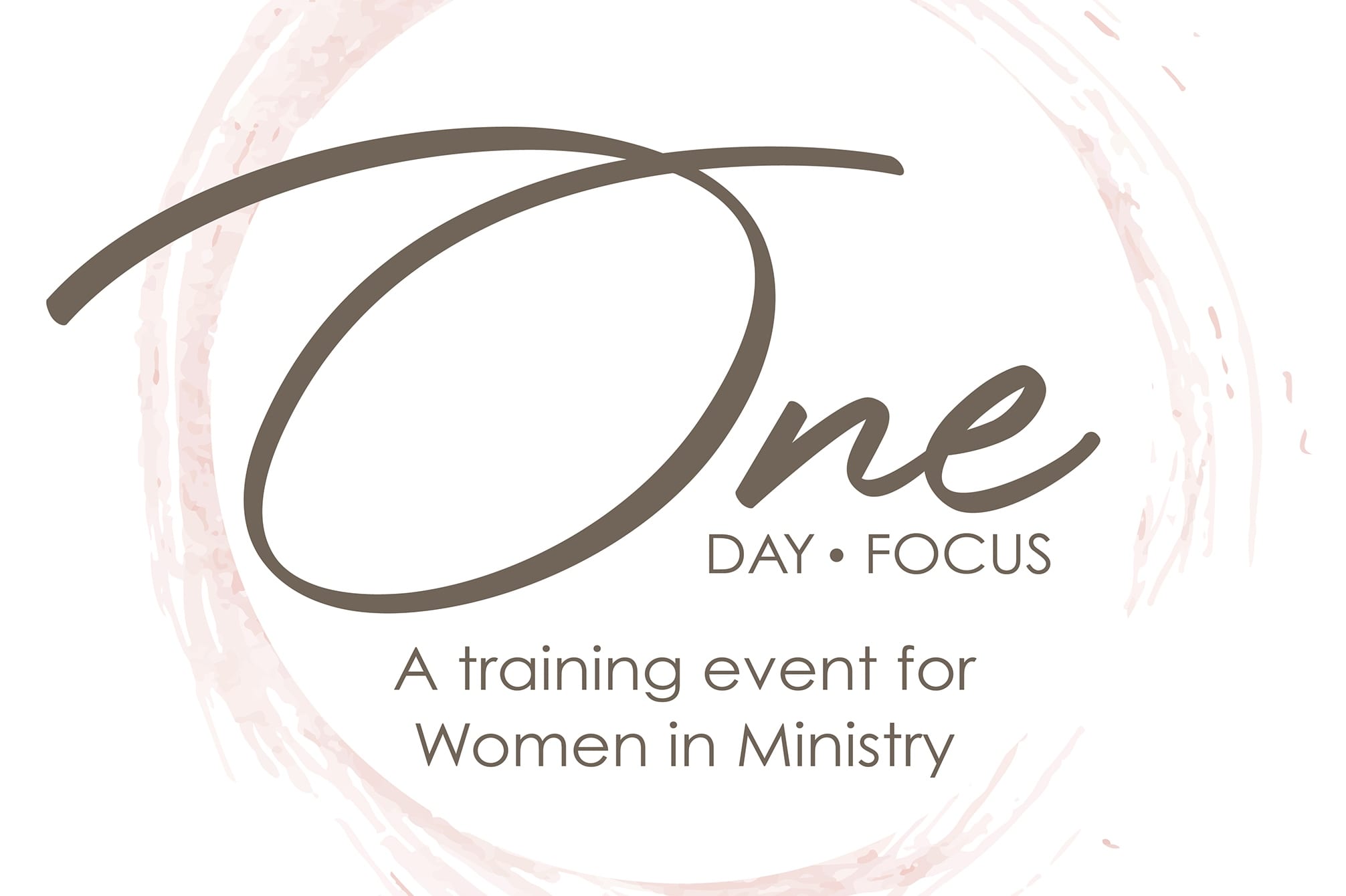