In an 8-1 vote, the Supreme Court ruled March 8 that $1 in damages is enough to revive the lawsuit of a Georgia college student who said his free speech rights were violated in 2016 as he attempted to share the gospel.

Chike Uzuegbunam’s case stemmed from his attempts to discuss his faith while he was a student at Georgia Perimeter College in Lawrenceville, a suburb northeast of Atlanta. After he filed suit, the college changed its free speech policy, leading to favorable rulings for the school by a federal judge and the 11th Circuit Court of Appeals.

According to the lower courts, the policy revision plus the fact that Uzuegbunam has since graduated, made the case moot. However, the Supreme Court disagreed in what became a discussion over “nominal damages.”

“To demonstrate standing, the plaintiff must not only establish an injury that is fairly traceable to the challenged conduct but must also seek a remedy that redresses that injury,” wrote Justice Clarence Thomas in the majority opinion. “And if in the course of litigation a court finds that it can no longer provide a plaintiff with any effectual relief, the case generally is moot. This case asks whether an award of nominal damages by itself can redress a past injury. We hold that it can.”

For the first time in his 15-year tenure, Chief Justice John Roberts was the only dissenting opinion, according to SCOTUSblog.

The Ethics & Religious Liberty Commission (ERLC) President Russell Moore said the ruling “is significant not only for Chike Uzuegbunam, but for all those who might one day need to appeal to the courts for justice.”

“As we argued in our amicus brief to the Court, it is a fundamental harm for the state to infringe upon a person’s right to religion or free expression,” Moore said in a written statement. “Today’s ruling strengthens every American’s right to seek and obtain justice when those foundational rights are infringed.”

Alliance Defending Freedom (ADF) filed the brief on behalf of Uzuegbunam and Joseph Bradford, a fellow Georgia Perimeter College student who said he decided not to speak out for his beliefs after witnessing the treatment Uzuegbunam received.

In arguments presented Jan. 12 to the Court, ADF General Counsel Kristen Waggoner said Georgia Gwinnett authorities had caused “concrete injuries” in attempting to prevent the students from sharing their faith.

“Chike and Joseph lost forever the chance to get those days back and speak their message to their peers,” she said. “No policy change can ever restore that lost opportunity.”

At that time the ERLC had signed onto a friend-of-the-court brief in support of Uzuegbunam and Bradford’s First Amendment rights.

“The government should be held accountable when it violates our fundamental rights,”said Travis Wussow, the ERLC’s general counsel and vice president for public policy. “This case is important not just for free speech and religious freedom on college campuses but a number of other circumstances, including public health orders during a pandemic.”

Other groups signing on in support of the plaintiffs include the Department of Justice, National Association of Evangelicals, U.S. Conference of Catholic Bishops and American Civil Liberties Union.

SCOTUSblog also reported that a line of questioning by Justice Amy Coney Barrett in January may have swayed the court in consideration of broader implications for the Georgia ruling. At that time, Barrett asked a DOJ lawyer if a New York City gun law the Supreme Court had dismissed as moot after the city changed its policy might have had a different outcome had those plaintiffs sought nominal damages. Yes, the lawyer replied.

As a student at Georgia Perimeter College, Uzuegbunam stood at an outdoor plaza near the library where peers gathered. There, he engaged in conversations about his Christian faith with interested students while providing religious tracts.

At one point a campus police officer approached and informed Uzuegbunam it was against campus policy to distribute written religious literature. Uzuegbunam complied, but in a later meeting with the college’s director of the Office of Student Integrity, he was directed to speak only in two designated “free speech expression areas” that make up only .0015% of the campus.

After securing the necessary permit to speak in the free expression zones, Uzuegbunam was interrupted 20 minutes into speaking by another campus officer telling him to stop as some people had complained about his speech. Other groups had not only been allowed to speak outside of the zones, Uzuegbunam said, but provided audio amplification for their messages.

Initially, the college said Uzuegbunam’s public discussion over his faith “arguably rose to the level of ‘fighting words.’” Soon thereafter it changed strategy, revising its policy and attempting to declare the case moot. 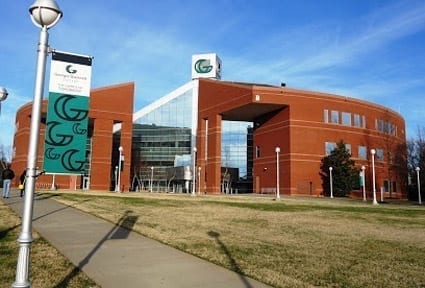