The ‘Queen James Bible’ does nothing but confuse & enslave

LOUISVILLE, Ky. – In 1631, something scandalous happened: Someone printed a Bible, soon called “The Wicked Bible,” that translated the seventh commandment of Exodus 20:14 as “Thou shalt commit adultery.” One can imagine the scandal this caused in 17th-century England. It resulted in huge fines, mortified archbishops, and whispered conversations. The loss of just one word from a careful biblical translation caused a national uproar.

The corruption of the biblical text continues apace in our day, albeit on a far more drastic scale. Recently, a group of homosexual activists released the “Queen James Bible,” a version of scripture that is “gay-friendly.” The translation philosophy is muddled in thought but clear in intent: As the editors plainly state, “We edited the Bible to prevent homophobic interpretations.” This is not an objective project; it is an exercise in theological airbrushing.

First, the editors assert that “The Bible says nothing about homosexuality. However, there might be no other argument in contemporary faith as heated as what the Bible is interpreted to say about homosexuality.” This is simply wrong; in Romans 1:26-28, the Apostle Paul declares in the original Greek that all who participate in homosexual activity face God’s condemnation for sin. Leviticus 20:13, furthermore, makes unmistakably clear that a man “lying with a man” will bring fearsome consequences.

But the confusion continues. According to the editors:

“The Bible is the word of God translated by man. This (saying nothing countless translations and the evolution of language itself) means the Bible can be interpreted in different ways, leading to what we call ‘interpretive ambiguity.’”

This is not nearly as clever as the editors think it is. In reality, biblical translation is a lot like any other kind of interpretation, though it is produced, ideally, with maximal reverence toward God and love for humanity. If you’re translating, say, Homer from the original Greek, you’ll likely have a few points of difference with fellow translators; perhaps there will be some touchy spots. But when translators seek a faithful, as-literal-as-is-possible translation, their work will likely have remarkable similarities.

This isn’t true only of sacred and classic texts, though. If you’re trying to translate instructions from Spanish to English for that shiny new iPhone you received for Christmas, won’t you naturally (without even thinking) try for as accurate a literal translation as you can get? Those who want to fry their poor iPhone: by all means, emphasize “interpretive ambiguity.”

I took 10 Greek and Hebrew classes in seminary, and I assure you, translation is far less ambiguous than the “Queen James Bible” editors suggest. Most biblical texts in the original languages simply do not produce the kind of lurching uncertainty that some think they do. This is a common misconception that is easily dispelled in the opening weeks of a college or seminary class in the original languages.

In stating their translation philosophy, the editors assert that updates in language clear the way for unapologetic changes to the original text:

“Many versions of the Bible translated and published since the King James Bible have changed the language, so the precedent had been set for editing. Furthermore, both problems with editing are easily addressed by deciding to make the edits as simple as possible.”

Perhaps we’re expected to receive the matter of linguistic changes as a revelation (no pun intended). It is of course true that we don’t speak today in “these” and “thous.” Different words in our Bibles have changed over the centuries (though many have stayed the same). Updating language to use modern pronouns is a far cry, however, from excising passages from the Bible, as has happened in the QJB.

But what about the central charge against the Bible in this document? Does scripture condone “homophobia?” No, it does not. God’s Word issues threats of judgment and promises of grace to sinners of all kinds: those who get angry at their sibling (Matthew 5:22), those who cheat on their taxes and lie (Colossians 3:9), those who understand faith to mean doing good works to be saved (Ephesians 2:8-9), and many others. Every sinner – gay, straight, Republican, Democrat, Catholic, Baptist – must repent and be changed.

So the God of the Bible is not like the boyfriend in unnerving pop songs you hear on the radio; He is not “the one who would never ask you to change because you’re so unstoppably amazing.” The God of scripture offers us love, but it is costly love, for Him and for us. In order to save sinners like you and me, God must cleanse our sin. This meets the just demands of His holiness (Romans 4-5). He accomplished this through the death of His Son, Jesus Christ (Matthew 27). Our fundamental confession to God as a broken sinner is this: “You are right, and I am wrong.” God’s love cost Him His Son; God’s love costs us our sin.

For those drawn to a homosexual lifestyle, this means that repentance is necessary. God is not homophobic in calling gays and lesbians to repent; He is gracious in extending mercy to all of us, calling all of us to repent of our sins. We must not edit the Bible, as the editors of the QJB clearly say they have, to make it fit our lifestyle and excuse our sins. The scripture is a friend to any sinner who receives the gift of forgiveness in Christ.

Some have done so; some have seen this. As former lesbian (and activist academic) Rosaria Champagne Butterfield has shown in her spellbinding memoir, homosexual practice does not liberate – it enslaves. Our only hope as unrighteous people is to go to God’s good Word and embrace all of its wisdom, in order that all of us – and every aspect of our being – might know all of his grace.

(EDITOR’S NOTE – Owen Strachan is assistant professor of Christian theology and church history at Boyce College and the co-author of “The Essential Edwards Collection.”) 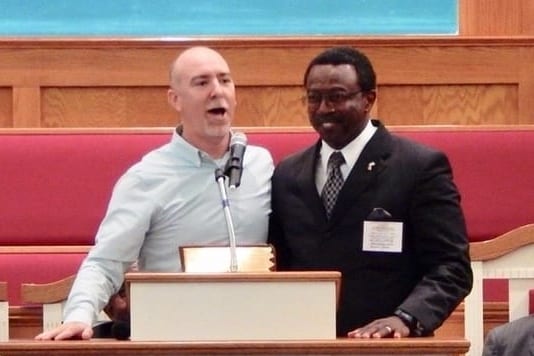