We must be distinctively Baptist

EDITOR’S NOTE – This essay from Tom Ascol is published in conjunction with essays from Bart Barber and Robin Hadaway. Ascol, Barber and Hadaway are the three known candidates to be nominated for Southern Baptist Convention (SBC) president at the 2022 SBC annual meeting in Anaheim, Calif.

By the time you read this, we will be less than two weeks away from the SBC’s annual meeting in Anaheim, Calif. It’s a joyful and weighty duty that we have as Baptists to gather together every year. Most messengers do so at great personal expense. We all do it to collectively exercise oversight over the largest Protestant denomination in America.

But it’s important to remember that we aren’t just Protestants, we are Baptists. That means that the SBC as a whole, and every single entity and institution within it, should respect and promote our historic Baptist distinctives. If elected president of the SBC, I commit to you, the millions of faithful members in the pews, that I will work to ensure that the SBC stewards well the trust of Baptist churches. This means that every single dollar given to the Cooperative Program should be wisely used to advance our shared baptistic mission of spreading the gospel of Jesus Christ in the power of the Holy Spirit and for the glory of God the Father.

What is it, then, that makes us “distinctly Baptist”? No, it’s not fried chicken and football. While I can think of more, here are four key distinctives that the SBC needs to recover and refocus on in the years to come.

First, we believe in the inerrancy and sufficiency of scripture.

Without this belief, we not only cease to be Baptists—we cease to be orthodox Christians. And as Baptists, we don’t just believe it, we commit to live like it. We believe that God’s Word is the final authority for our faith and practice. We have a Book. That Book the Bible. The SBC needs to get back to the Book.

I’ve been increasingly concerned about the rise of the “theoretical inerrantists” within our midst the last several years. Unfortunately, many SBC leaders and pastors today affirm biblical inerrancy in theory but not in practice. That is, they will sign the Baptist Faith and Message 2000 (BF&M 2000), the Abstract of Principles or Chicago Statement on Inerrancy without hesitation or mental reservation, and then will go right on thinking and living in ways that are contrary to the Word.

The spirit of the modern evangelical age is increasingly characterized by compromise on both inerrancy and sufficiency. Too many are satisfied by signatures on documents rather than by lives lived in humble submission and conformity to scripture. We have seen this in institutional responses to blatant pulpit plagiarism, the creeping acceptance of egalitarianism into our churches and how many voices are telling us that God’s Word does not have sufficient answers to deal with the pressing issues of the day.

Baptists must reject all efforts to undermine the inerrancy and sufficiency of the Word of God. After all, God himself tells us that “all scripture is God-breathed and is useful for teaching, rebuking, correcting and training in righteousness, so that the servant of God may be thoroughly equipped for every good work” (2 Timothy 3:16-17). Don’t we believe it?

Article VI of the BF&M 2000 on “The Church” clearly states that “a New Testament church of the Lord Jesus Christ is an autonomous local congregation of baptized believers.” This is non-negotiable for us as Baptists. If we lose local church autonomy, we may still be Christians, but we cease to be Baptists.

Of course, the SBC reserves the right to disfellowship any church that fails to conform to the standards in God’s Word for true churches and the commitments put down in the BF&M 2000. In fact, if any church that is in open rebellion to these commitments–either by failing to practice discipline against sex offenders or abusers, or by tolerating false teachers, or by having women pastors–they should be swiftly disfellowshipped from the SBC. But that is fundamentally different from creating an extra-judicial board or entity that can exercise authority in or over the specific affairs of a local, congregational church.

Another indispensable feature of autonomy is our congregationalism and the practice of regenerate church membership and discipline. Churches must follow the guidelines outlined in passages like Matthew 16:17-20 and 18:15-20 and 1 Corinthians 5:1-13 to deal with those who claim the name of Christ but live in such a way as to publicly contradict their profession.

The process of church discipline should be led by the pastors and leaders of the local church, but such weighty decisions must be brought before the assembled body. This is our God-given immune system against sin and scandal. It must be recovered and reused. Biblical polity will help preserve the gospel and provide safeguards for all church members, especially the most vulnerable among us.

Third, we are orthodox and confessional.

My brother Tom Hicks said it well in an article for Founders Ministries: “Orthodoxy has been an indispensably interconnected part of Baptist identity from the beginning.”

What does it mean to be “orthodox and confessional”? It means that we as Baptists affirm the ancient creeds and confessions of the Christian faith, which express in clear terms the key commitments of our theology (the doctrines of the Trinity, deity and humanity of Christ, deity of the Holy Spirit, etc.)—a theology that is grounded in God’s Word and is in alignment with historic Christianity. It’s not new. It’s not fancy. It’s ancient. Old. Orthodox.

We affirm the Nicene Creed, the Creed of Athanasius and the Apostles’ Creed. We hold fast to faithful, biblical Christology. We reject faulty Trinitarian theology, such as modalism and partialism.

We also must reject modern efforts to water down or reject the Bible’s clear teaching on issues such as the goodness of God’s creation order in humanity as expressed in two sexes, male and female (Genesis 1:27), the sin of homosexual attraction and behavior (Romans 1:26-27) or the resurgence of neo-Gnosticism that seeks to divide us by race or ethnicity, despite clear teachings that we are united in Christ (Ephesians 2:11-22).

As orthodox, confessional Baptists, we are bound by scripture, the creeds and confessions and our very own BF&M 2000, which affirms everything I just laid out. We must hold fast to these commitments—uncompromisingly and unashamedly. To weaken on any of these items, whether under pressure from the world or our own pragmatic desires, is to tell God that we know better than He does when it comes to our Christian faith.

Fourth, we are evangelical and missional.

The defining feature of Southern Baptist cooperation for decades has been our efforts to pool resources for the spread of the gospel. We exist to work together in helping each other obey Matthew 28:19-20: “Therefore, go and make disciples of all nations, baptizing them in the name of the Father and of the Son and of the Holy Spirit, and teaching them to obey everything I have commanded you.” Everything we do must be considered through this singular lens.

Why does our doctrine matter? Because without it we will, heaven forbid, export a false gospel! Why do our seminaries matter? Because they train future generations of pastors, professors, missionaries and counselors. If they are trained poorly or contrary to sound doctrine, they will teach, train and counsel others to do likewise, working at odds against our desire to spread the “faith that was once for all delivered to the saints” (Jude 1:3).

In a day and age of increasing social and political distractions, we must demand that our primary missionary-sending and church-planting agencies, IMB and NAMB, be fully focused on spreading the pure gospel—and planting distinctly Baptist churches. They must use SBC resources responsibly, reaching as many lost souls as they can for Christ, but never through pragmatic methods or compromised means. I think I speak on behalf of millions of my SBC brothers and sisters in Christ when I say we are tired of these entities being used for denominational politicking that distracts us from this gospel mission. If elected, I plan to help us recover and keep our emphasis on missions and evangelism—as Southern Baptists committed to the Great Commission.

Closing thoughts: A call to action for the sake of our local Baptist churches

I’m an ordinary pastor of a regular-sized SBC church that I have pastored for 36 years. I’m a churchman, not a company man. Like most other Southern Baptist pastors I know, I love shepherding the flock of God and am amazed that God has called me to this work. I know that many of the messengers in Anaheim will be just like me, regular pastors and regular churchmen and churchwomen who are committed to their local Baptist church. The SBC exists to advance the Baptist mission—their mission—and never to undermine it.

To that end, we must be committed to the inerrancy and sufficiency of scripture, zealous of the biblically-taught autonomy of our local churches, committed to confessional orthodoxy and with an emphasis on evangelism and missions. That’s what makes us distinctly Baptist. And that’s what is at stake in Anaheim.

Over the last few years, I’ve heard from SBC pastors daily who are frustrated and agitated by what they see going on in their convention. Most are disillusioned and ready to lead their churches to withdraw. My counsel has been to remind every Southern Baptist that the entities, institutions and agencies of the SBC belong to the churches, and the churches must hold them accountable. We need to reaffirm that in Anaheim on June 13-14. I hope to see you there. The future of the SBC depends on it. 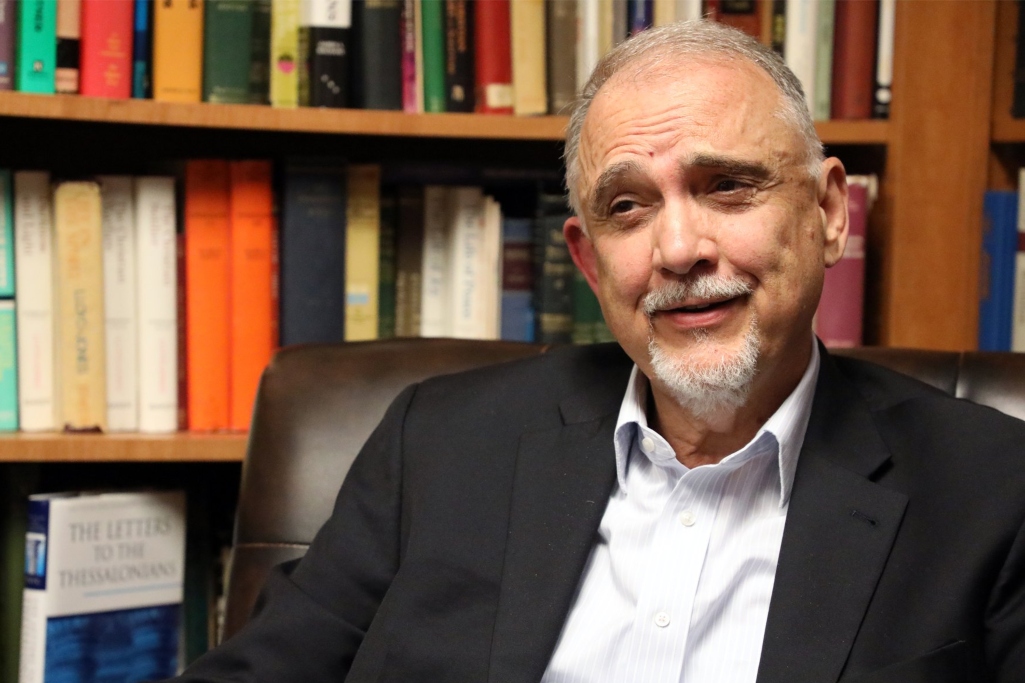 An interview with Tom Ascol

By Jonathan Howe and Brandon Porter, Baptist Press
May 02 2022