Grant conveyed the story of an African American pastor in Cleveland, Ohio, who contacted him to inquire about cooperating with the SBC. When Grant asked why, the answer was: Because of diversity. The pastor said his African American church wanted to embrace the opportunity for a larger dialogue “biblically and culturally” in the SBC, Grant said.

During the past two years in his role, Grant has sought to provide clarity for why African American churches should actively participate in the SBC. African American pastors, he said, want to know how the convention functions and how their voices can be heard. To that end, the EC has published an orientation guide called “Navigating the SBC.”

African American churches, according to a survey Grant initiated, mainly want to be involved in the SBC because of world missions, Christian education, church planting and disaster relief. More information about ministry among the more than 4,000 African, African American and Caribbean Island congregations in the SBC is available at sbc.net/blackchurch, Grant said.

Luis Lopez, associate vice president of Hispanic relations and mobilization at the EC, said God is moving in a special way among the more than 3,200 Hispanic congregations across the SBC, “saving, baptizing, training and sending Hispanic leaders.”

Lopez saw Southern Baptists’ ministry among Hispanics vividly in the aftermath of the school shooting in Uvalde, Texas.

“It is one thing to hear about a massacre in the news. It is yet another thing to see the loss, the pain and the inexplicability of some things that happen in life,” Lopez said. “Yet, the love of God was manifested right after that tragedy as I saw pastors, associational leaders and state leaders from both (Texas) conventions letting the community know that God cares and, most importantly, that He is still in control of this hurting world.”

Recent in Hispanic work is a Spanish podcast called “Vida SBC (SBC Life),” hosted by Lopez and his administrative assistant, Martha Espinoza, with the goal of encouraging and engaging more Hispanic churches.

“We have gotten some great feedback from our leaders,” Lopez said. “In fact, in the last few weeks, in various podcast platforms, this podcast has been trending as one of the ones with the most downloads in the nation.”

Lopez said he is excited to see God “raising a generation of God-fearing, doctrinally-sound, mission-minded and generous Hispanic leaders” who are ready to step up when given the opportunity and the tools to serve.

Peter Yanes, associate vice president of Asian American relations and mobilization, said more than 2,000 Asian churches across the convention represent about 30 Asian nationalities with their own subgroups of culture, language and immigration history.

Yanes thanked EC members and others who have faithfully given through the Cooperative Program to reach the nations for Christ. He recounted that in 1953 the International Mission Board (IMB) sent a worker to the northern region of the Philippines who planted a church that directly led to Yanes’ salvation and call to ministry.

“In 1995, I heard the gospel for the first time. I got saved. I responded to the call. My parents, my siblings, came to know Jesus Christ, and there’s five of us right now in full time ministry,” he said.

About 10 Asian national fellowships have existed in the SBC for a while, Yanes said, but next year in New Orleans, the newly-formed Myanmar Churches Network, representing about 120 Burmese churches, will meet for the first time in conjunction with the SBC annual meeting. The president of that network told Yanes he has never felt more at home in the SBC.

After a recent Asian American pastors summit hosted by the IMB, an eager young pastor said now that he knows how Cooperative Program dollars are used, he will lead his church to step up its giving, Yanes said.

“Every dollar that you have given to the Cooperative Program made an eternal impact to me, my family and many other thousands and millions out there,” Yanes told the EC. “If it worked then, it’s still working now, and it will always work.” 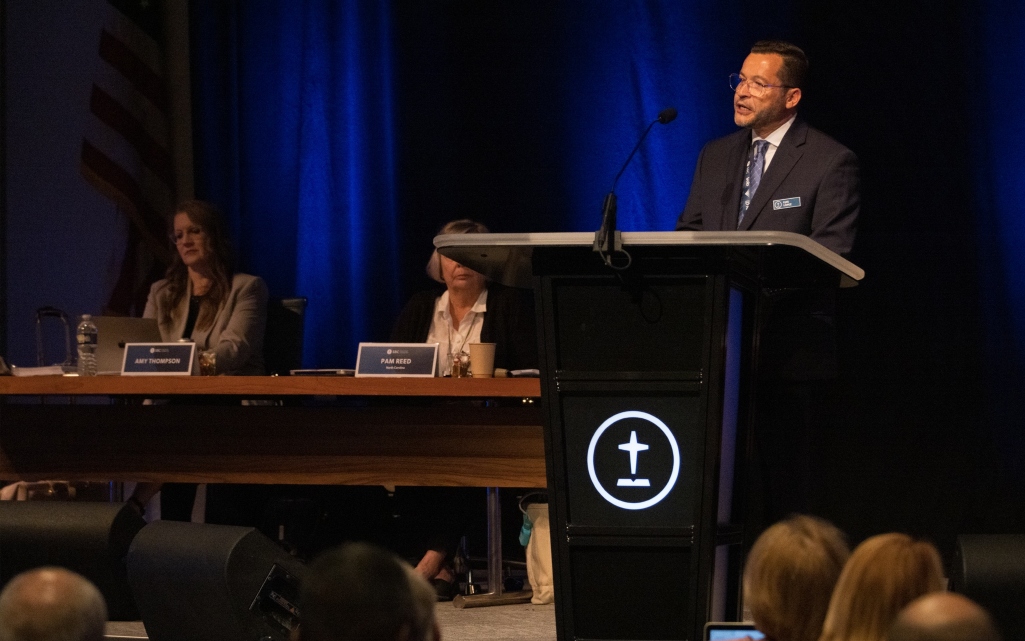 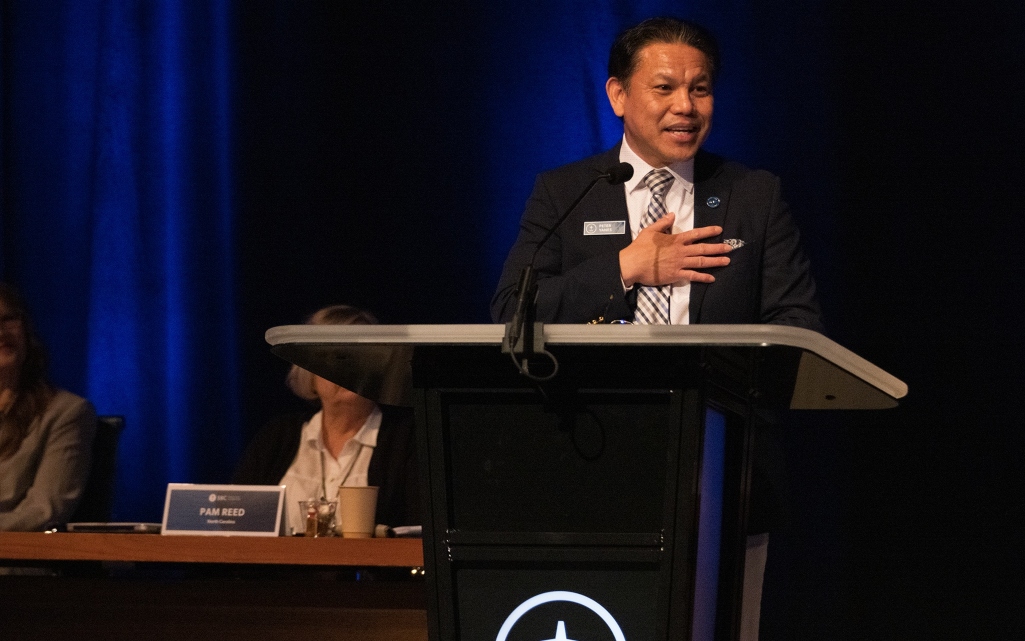 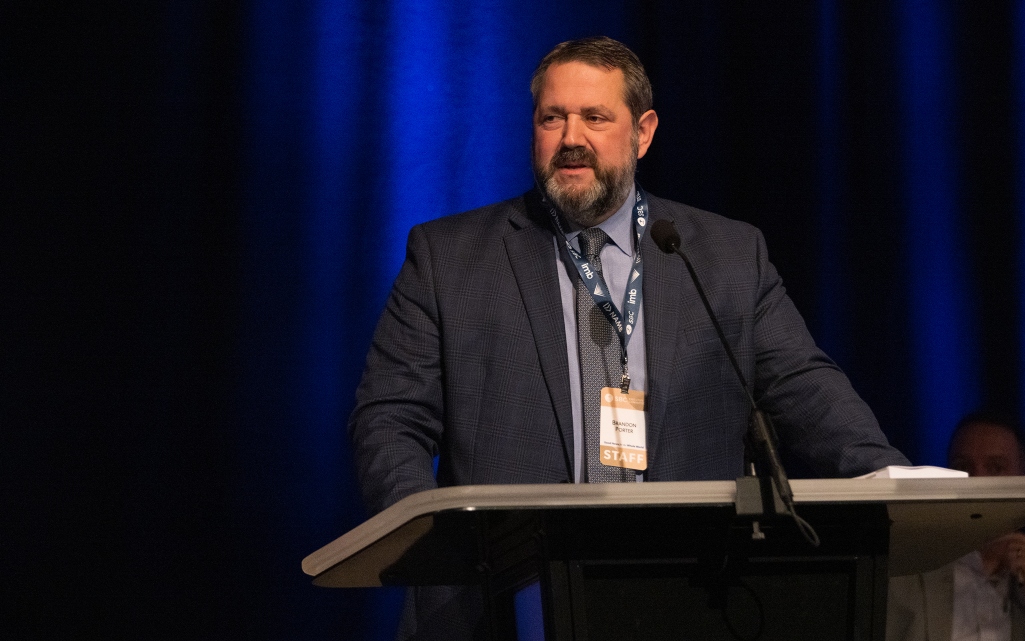 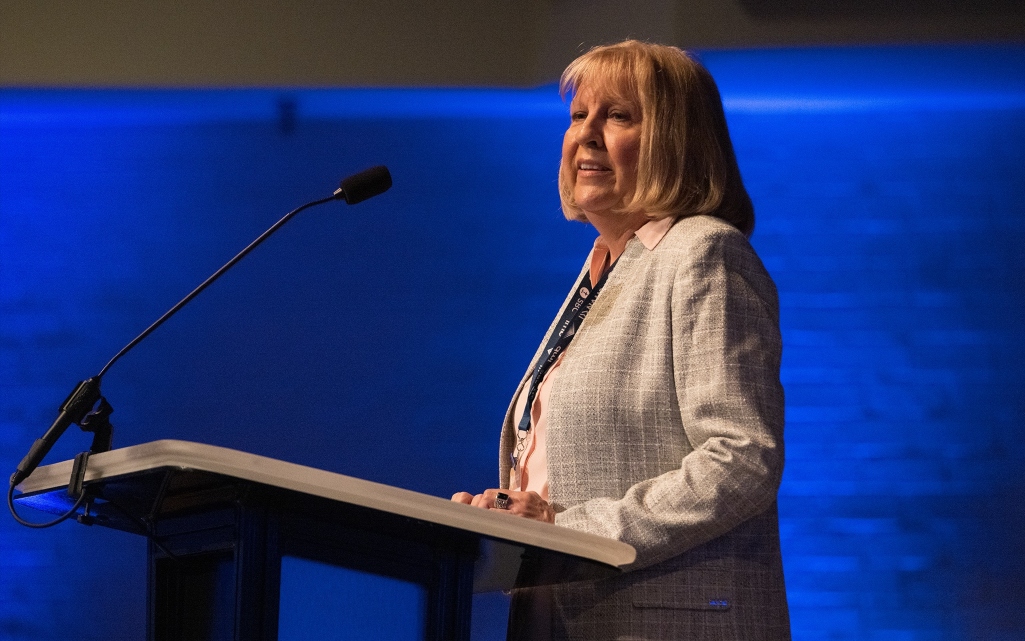 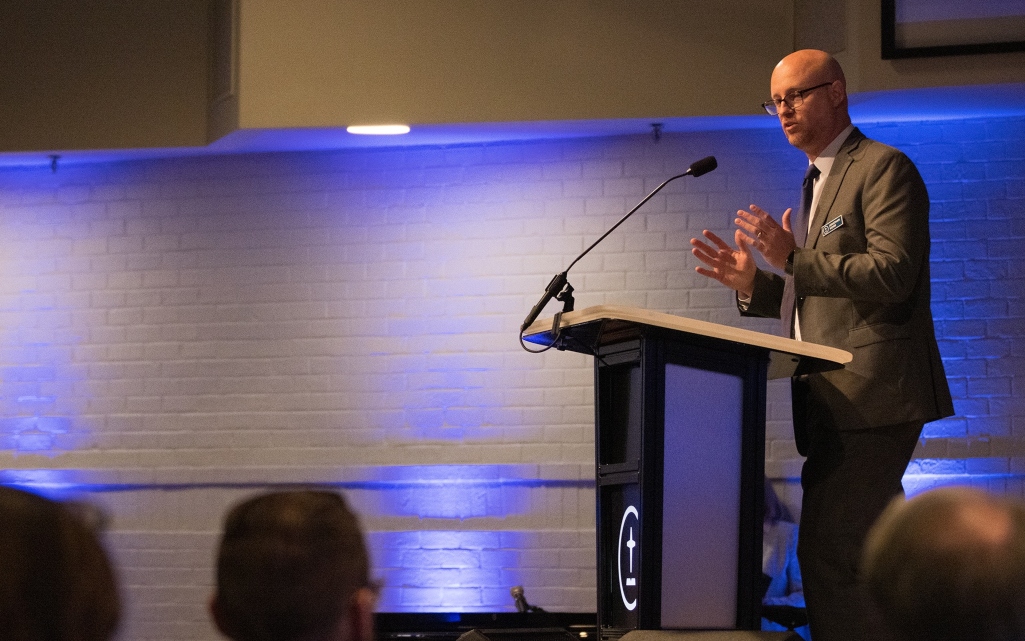 Brandon Porter, the EC’s associate vice president of convention news, reported that the news service entered the radio world this year when it launched a weekly three-minute newscast, hoping at least one station would air it somewhere in the nation.

“Within weeks – thanks to the help of Jon Wilke, who works in our communications area, and the strategy that we carried out – the Lord has blessed us to be on nearly 150 radio stations all across the country,” Porter said to applause.

Through that newscast, Americans are able to gain a fuller picture of who Southern Baptists are to contrast with the negative angle they might normally see on a national broadcast, Porter said.

Listeners can hear about the work Southern Baptists are doing in Ukraine and in areas hit by disaster, “right there when people are hurting the most, and they’re bringing not only physical relief to them but they’re bringing spiritual and emotional relief through the power of the gospel,” Porter said.

At Baptist Press, the editors and writers are actively involved in local Southern Baptist churches as “boots on the ground,” gaining experiences that shape their reporting, Porter said, adding that the staff holds closely to the guidelines set forth by SBC messengers as it builds on the 75-year legacy of the news service.

“Baptist Press is unique among news organizations because we are the convention’s news service,” Porter said. “We are not an independent nonprofit. We function at the commission of the Southern Baptist Convention, and that stays front-of-mind for us. There is independence from entities to do the work that we are called to do, in a sense, but there’s not freedom from entities.”

Porter also highlighted the recent release of the 2022 SBC Annual, available in hard copy or online. The resource is the best way to stay informed of SBC developments throughout the year, he said.

Twila Roberts, interim chief financial officer at the EC, said she is the third person to serve in the CFO position in the past year but the department is strong as long as it adheres to the SBC Business and Financial Plan for guidance and financial accountability.

“I learned quickly that stewardship is an important and serious business here,” Roberts said. “There is rarely a conversation that I have that doesn’t involve the word ‘stewardship.’”

The Cooperative Program is one of the most significant responsibilities the finance department has, she said.

“Each week, the money received from state conventions and individual churches is counted, reports are checked and rechecked, and a strict schedule of prompt distribution to our ministry partners is faithfully maintained,” Roberts said, adding that despite choppy waters, “the finance team is dedicated to the work of the mission, and we firmly believe that good is ahead.”

Jonathan Howe, vice president for communications, noted that a new edition of SBC Life, the journal of the EC, is available now, addressing an important question that many Southern Baptists are asking: What is a pastor?

Hotel reservations for the 2023 SBC annual meeting in New Orleans open Oct. 3, Howe said, and the convention is expecting its largest exhibit hall space ever with just over 200 spaces available. Many of those are already reserved, he said.

“With a free convention, so to speak – there’s no entry fee to come to the Southern Baptist Convention – we have to offset those costs, and the big way that we do that is through our exhibit hall,” Howe said. 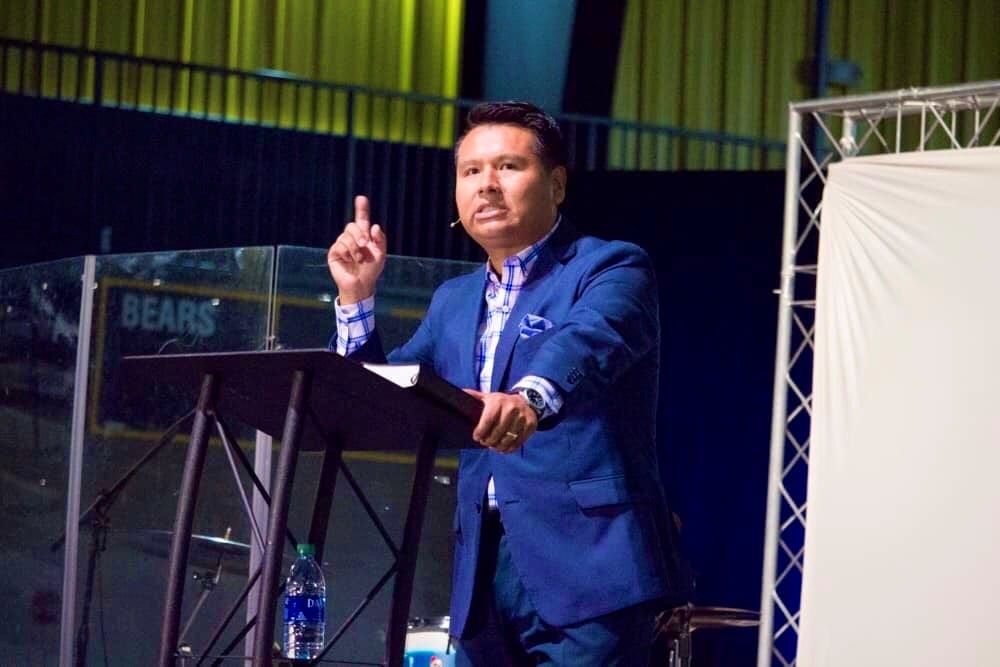 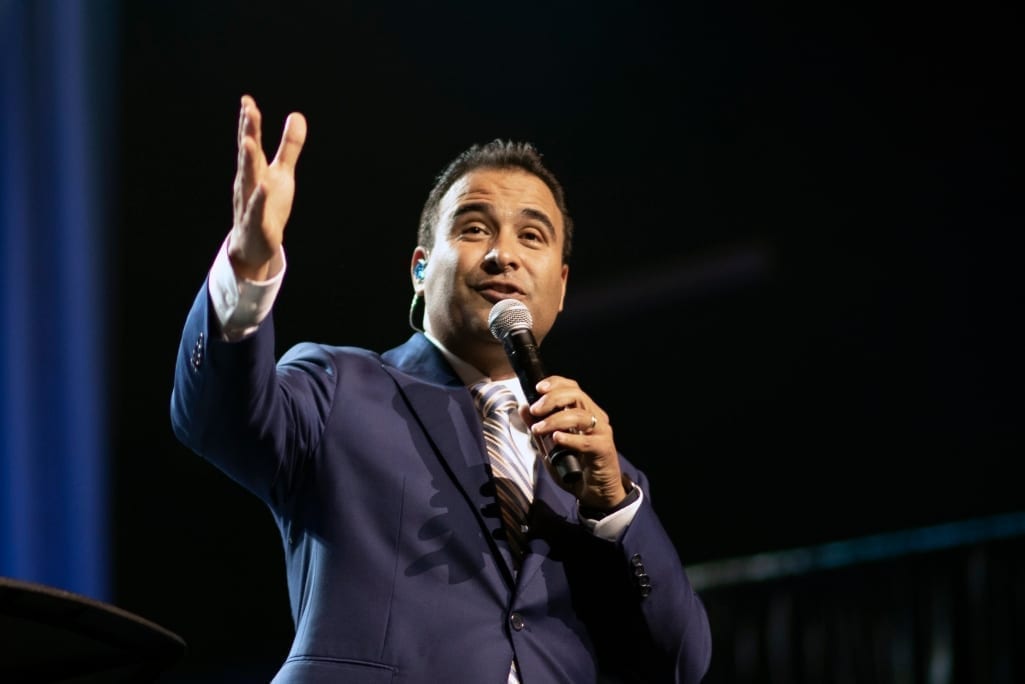