The day Juvenal Gonzalez spoke with the Biblical Recorder started just like every other day for him since early December: preparing and serving breakfast – tamales, chilaquiles, sometimes bacon and eggs and pancakes – to asylum seekers at El Barretal, an abandoned concert venue in Tijuana, Mexico, that now houses caravan migrants from Central America.

Gonzalez serves as the church planting catalyst missionary for the San Diego Southern Baptist Association (SDSBA). He began the role in 2006 after moving from Lumberton, N.C., where he founded and pastored Iglesia Bautista Betel for 13 years. Now he works with existing congregations to start new churches in Tijuana, one of Mexico’s largest and fastest growing cities.

“Some people migrate from the earthquakes, some people from the cartel, running from the dangers,” Gonzalez said. Thousands made the journey on foot and in vehicles, primarily from Honduras, with some from El Salvador and Guatemala.

El Barretal is a 30-minute drive from the San Ysidro Port of Entry, where migrants can check on their place in line to file an asylum claim in the United States. At some ports of entry, U.S. Customs and Border Protection officials can only process 20 people per day, extending wait times for asylum seekers.

When Gonzalez first met migrants at El Barretal last month, there were 3,000 at the center. Today 700 remain.

“The majority of these people, they already crossed,” he said, only to find themselves in detention centers in California and Arizona.

The Mexican government opened El Barretal as a shelter when another facility, a sports complex called Deportivo Benito Juárez, became overcrowded and littered with trash and sewage. It was there that Gonzalez, along with his wife, two sons and daughter, first provided migrants with coffee and bread. They ran out quickly.

“The next day they call us. The immigration from Mexico call us and asked if we can feed women and children. There was big rain coming, so we prepared chicken soup. I asked what time they want it, and they say, ‘Hold, hold, hold.’”

Around 7 p.m., Gonzalez heard back from officials who requested he take the food to the new site instead.

“So we wait with chicken soup at El Barretal, and as soon as they arrived, it was wet, raining hard, so we received people with the chicken soup plate.”

Two other pastors and several local church members have since joined the family on their daily visits to the shelter.

“I try not to be busy so I can talk to people,” Gonzalez said. “Somebody will ask me if I’ll pray for them, if I’ll talk to them, if I’ll listen to them. One of the great needs is spiritual. We need churches. We need brothers and sisters that can come and spend the whole day teaching and praying for them.”

An immigrant himself who first came to the U.S. for work, Gonzalez said he was initially “a little slow in getting into” ministry to asylum seekers.

“When the government in Mexico knows that you’re a pastor and you care for people, how can you say no?” he said. “So when they called me, it was like an open door to show the government the love of Christ and also to show the people from the caravan that God really cares for them.”

The immigration official who contacted Gonzalez met him two years ago, when his church served as a sanctuary for Haitian refugees.

“Right now the government here in Tijuana, they really trust in me. Whatever I say, they say, ‘Yeah, pastor, we’re gonna do it.’ It’s really a testimony for us as a Christian to come and serve,” he said.

“For me, it was not a matter of taking sides – that they come illegally, or they’re gonna be legal – my first response was: Christ opened the door for me to show His love. … Some people think that they don’t deserve, but nobody deserves.

“So to me, it was more like, hey, I need to be obedient helping the poor, the needy, the widow and the children. For me, it was like a wake-up call when they called me.”

Gonzalez told the Recorder he is prepared to welcome teams that want to care for people at El Barretal. With support from SDSBA, he can offer transportation and housing for church groups visiting from the U.S. The time he could spend in conversation with individuals and families is limited by the demands of food distribution. He simply needs more people.

Alan Cross, missional strategist for the Montgomery Baptist Association in Alabama, traveled to Tijuana in December. He visited the border wall at the Pacific Ocean, where Christians on the U.S. side of the wall gathered to pray and sing.

“In the midst of the news stories and concern about the border, I saw the church at work on both sides ministering, praying and being the hands and feet of Jesus to migrants,” Cross said in a statement to the Recorder. “I saw them being treated as people in need and not political objects. The church transcends borders and is transforming this controversy into opportunity for ministry and the gospel of the Kingdom to be proclaimed and demonstrated to these desperate people.

“I pray that Southern Baptists will further join with missionaries like Juvenal to share the love of Christ with the migrants coming to us for help.”

In addition to physical presence at El Barretal, Gonzalez asked for prayer for more opportunities to minister to asylum seekers. Individuals and churches can also make financial contributions to SDSBA for the work in Tijuana. Visit sdsba.net to donate. 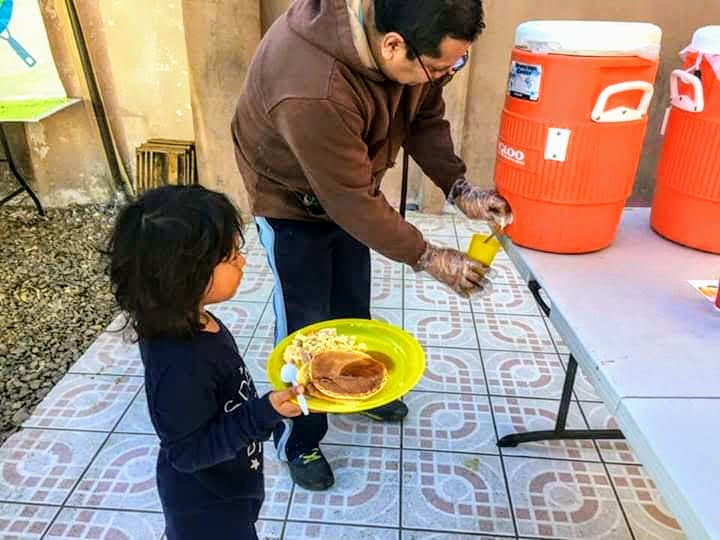