Hollifield, 70, has led the convention for 14 years and has served for a total of 27 years. He was elected as the 14th executive director-treasurer on April 11, 2006 during a special called meeting of the convention held at Calvary Baptist Church in Winston-Salem.

Hollifield shared his retirement plans during a regularly scheduled meeting of the BSC executive committee on Tuesday, May 19 that was held via Zoom video conference due to ongoing limits on public gatherings related to COVID-19. Hollifield also made a joint announcement to state convention staff and the full board of directors by email.

“It has been a privilege to work for the Baptist State Convention of North Carolina since June 1, 1993,” Hollifield said. “North Carolina Baptists honored me 14 years ago when they asked me to lead the work of this great convention of Baptist churches and associations as the 14th executive director-treasurer. Over this span of time, we have seen our majestic and holy God do some amazing things as we have cooperated, labored and prayed together. I give all glory and praise to God for what He has chosen to do through us.

“Just as clearly as I sensed God’s leadership in His calling upon my life to accept the position as your executive director in 2006, now I am confident that He is leading me to move toward retirement effective Feb. 28 of next year.” Hollifield said. “My desire and prayer has always been to seek God’s will and His timing in every area of my life and ministry. As I prayed over a period of several months, searched the scriptures and waited for God, I became convinced this move is the right decision for Gloria and me. I am not leaving the ministry when I retire from this position, but it will be different.”

Since being named executive director-treasurer, Hollifield’s stated vision for the convention has been “By God’s grace, we will become the strongest force in the history of this convention for reaching people with the gospel of the Lord Jesus Christ.”

Under his leadership, Hollifield oversaw the development, adoption and implementation of an ongoing statewide strategy that is focused on “impacting lostness through disciple-making.”

“Milton Hollifield is a man of God who has given himself to serving the churches of North Carolina,” Ronnie Floyd, president of the Southern Baptist Convention’s executive committee, told the Biblical Recorder. “He has prioritized making disciples of all the nations. His passion and vision has been to reach people for Jesus Christ. As a Christian leader, I appreciate the partnership in the gospel that we have shared. He is a friend, an encourager and a warrior in prayer for me.”

In addition, N.C. Baptists have ranked at or near the top among all state conventions in annual support of the Annie Armstrong Easter Offering for North American missions and the Lottie Moon Christmas Offering for international missions.

“Milton and Gloria Hollifield have been among our chief encouragers and prayer warriors, and Michelle and I are deeply grateful for their friendship,” International Mission Board president Paul Chitwood told the Recorder. “Milton is a model leader in the cooperative mission work of Southern Baptists and has served North Carolina Baptists well. He will be missed in his role, and his retirement will be marked with thanksgiving and a celebration for all he has done to serve the Great Commission of our Lord.”

Kevin Ezell, president of the North American Mission Board, added: “When I think of the definition of ‘godly leader,’ I cannot think of a better example than Brother Milton. I have always benefited from his advice and counsel. Whenever I have the opportunity to spend time with him, I am always better for it. I’m happy for him as he makes this transition and will be praying all the best for him, but I will greatly miss his leadership, wisdom and compassion.”

Prior to being named executive director-treasurer, Hollifield served as director of the BSC’s Evangelism Division beginning in 1993, and he later became executive leader of the Mission Growth Evangelism Group. During his overall tenure with the convention, Hollifield has played a direct role in hiring all but a handful of the current staff.

“I am especially proud of each and every staff member of the Baptist State Convention of North Carolina as they seek to assist the churches in their divinely appointed mission to fulfill the Great Commission,” Hollifield said. “It has been such a privilege to work with so many talented and gifted people who love the Lord, believe the Bible and carry out their respective ministry assignments in a Christ-honoring manner.

“When I leave this leadership post next February, the thing I believe I will miss most is working with and leading this staff of wonderful people who are deeply committed to following Jesus, sharing the gospel, leading others to faith in Christ and making disciples. I will greatly miss our times of worshipping God and praying together.”

Before joining the state convention, Hollifield served as the executive director of missions for the Gaston Baptist Association in Gastonia, N.C. He also served as senior pastor of First Baptist Church of Stanley, N.C., and as associate pastor of West Asheville Baptist Church.

Hollifield earned a bachelor’s degree in psychology from Mars Hill College (now Mars Hill University) in 1977 and a master of divinity degree from Southwestern Baptist Theological Seminary in Fort Worth, Texas, in 1980. While in seminary, he also pastored West Shady Grove Baptist Church in Blue Ridge, Texas.

Born in Marion, N.C., Hollifield grew up in Swannanoa, N.C., where his father served as a pastor. He is married to the former Gloria Sullins of Black Mountain, N.C. They have one son, Judson, who lives with his wife, Jamie, in Asheville, N.C., and two grandsons.

Hollifield said he looks forward to spending more time with his family in retirement and will remain active in gospel ministry.

In keeping with precedents following previous retirement announcements of the convention’s executive director-treasurers, board President Melanie Wallace will appoint a special search committee to seek God’s will regarding Hollifield’s successor.

Wallace said N.C. Baptists will have the opportunity to recommend individuals to serve on the search committee through a dedicated email account at [email protected]. Recommendations may be made through Monday, June 15.

Wallace said recommendations for the search committee should include the individual’s name, mailing address, email address, phone number, church affiliation and a brief statement about why the person being nominated would serve the committee well.

Wallace praised Hollifield for visionary leadership throughout his tenure with the state convention.

“Milton Hollifield has served the convention well for 27 years, 14 as EDT,” Wallace said. “His vision has put a laser focus on church planting and revitalization, missions partnerships and disciple-making. I pray that Milton knows the impact he has made on individuals, churches and this convention.”

Wallace asked for prayer as she begins the process of naming a search committee for the BSC’s next executive director-treasurer.

“I take this responsibility seriously and covet the prayers of all N.C. Baptists,” Wallace said. “We aren’t replacing a person. Milton Hollifield simply cannot be replaced. What we are beginning is a search for God’s man who will bring his own God-given calling and God-given vision to lead us into the future.”

“I have known him for over 25 years and have always been impacted by his love for Christ and his passion for the lost,” Scoggins said. “I especially appreciate the wise choices he has made in selecting those working on our convention staff. Our convention is a much better place because of Milton’s leadership.”

SBC president J.D. Greear identified Hollifield as one of the influences that has led The Summit Church, where Greear is pastor, to invest heavily in the Cooperative Program.

“Thankful to have served with Milton these past 14 years,” Greear told the Recorder. “His winsomeness and bold faith in the gospel have served North Carolina Baptists well.

“One of many reasons the Summit church has been such a strong proponent of the Cooperative Program is in large part due to Milton’s unwavering support of our local church. He partners with Baptists all across the age, style, and cultural spectrum. He embodies the unity in the Baptist Faith and Message that promotes the gospel above all that we want to see. I am thankful for his wisdom, friendship, and example of a faithful leader.”

Get updates about breaking news with our new text messaging service – BR Connect. Subscribe below! 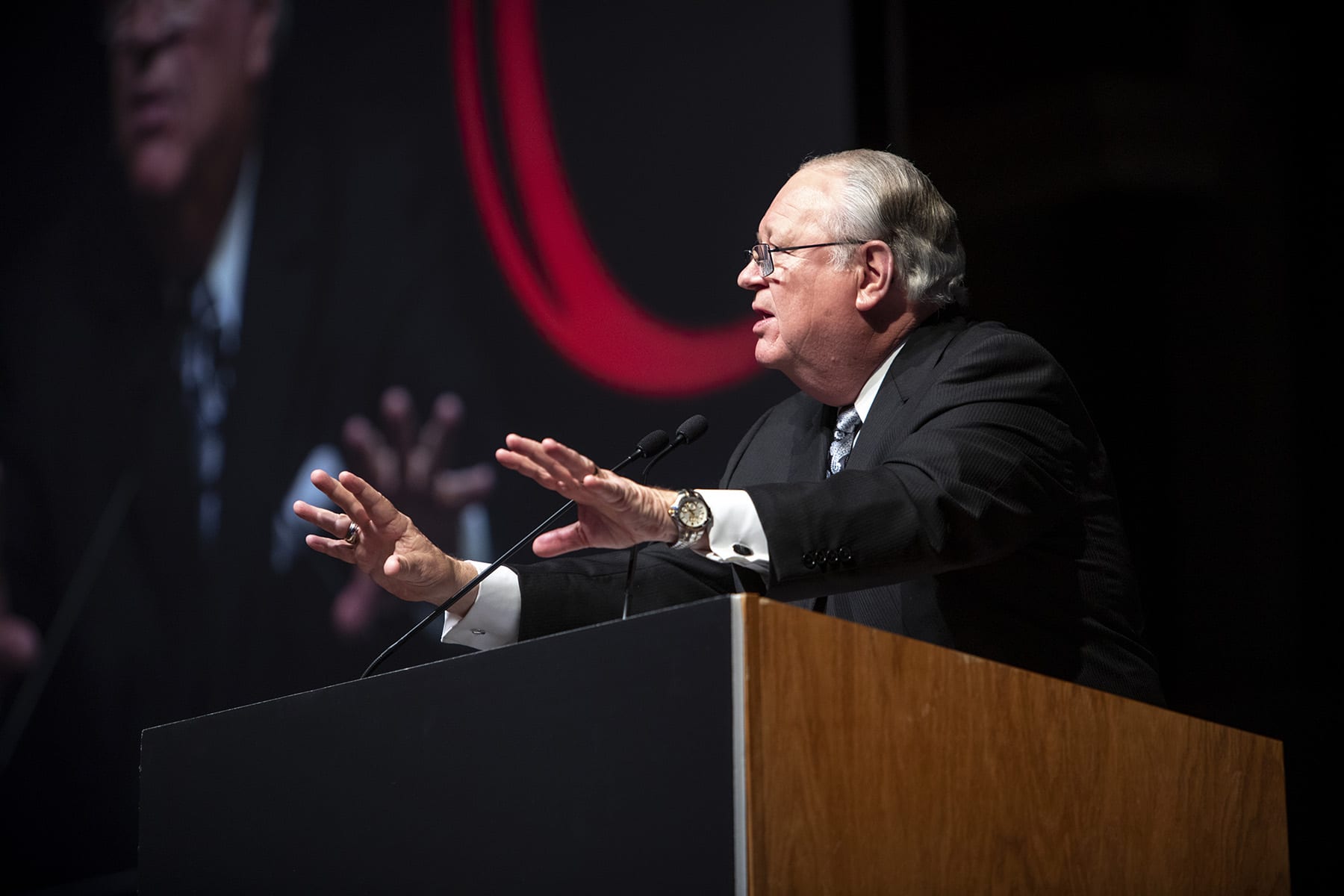 Grateful for Milton and Gloria Hollifield