With a theme focused on being “On Mission Together,” N.C. Baptists celebrated unity, diversity and partnerships during the Baptist State Convention of North Carolina’s (BSC) 192nd annual meeting, which saw messengers elect an African American to the office of state convention president for the first time.

The historic event drew 1,641 attendees – 1,355 messengers and 286 guests – from churches across the state for the two-day meeting, held Nov. 7-8 at the Joseph S. Koury Convention Center in Greensboro, N.C.

During the meeting, messengers adopted a $29.5 million Cooperative Program (CP) budget for 2023, heard a report on the results of a review of the state convention’s existing policies pertaining to sexual abuse awareness, and learned more about the state convention’s recently announced church planting partnership with the North American Mission Board (NAMB), known as SendNC.

Hill’s win in the presidential election came in a ballot vote against Casey Rayfield, pastor of Hickory Mountain Baptist Church in Siler City, N.C. Hill received 585 votes (77.2%) to Rayfield’s 168 votes (22.2%). There were five abstentions and one disallowed ballot.

Messengers approved a $29.5 million Cooperative Program (CP) budget for 2023 that reflected a $1.5 million or 5.4% increase over the current $28 million budget. The 2023 budget will increase the state convention’s allocation to global ministry partners by 3%, moving from 45% to 48% of the total budget. The budget also included increased funding for N.C. Baptist ministries.

In presenting the 2023 budget recommendation to messengers, Rick Speas, pastor of Old Town Baptist Church in Winston-Salem, N.C., and chairman of the state convention’s Budget Committee, called next year’s budget a “God-sized goal” for N.C. Baptists.

Messengers also approved a separate motion stipulating that any undesignated CP receipts in excess of the $29.5 million budget in 2023 be allocated evenly, with 50% going to global ministry partners and 50% going to N.C. Baptist ministries.

Messengers also adopted a $2.5 million goal for the 2023 North Carolina Missions Offering (NCMO), an increase of $400,000 or 19% over the current goal of $2.1 million. The NCMO supports a variety of ministries, including disaster relief and the 19 different ministries of N.C. Baptists on Mission, church planting, missions mobilization projects, mission camps, and associational projects.

The review came at the direction of the BSC’s executive committee prior to the 2022 annual meeting. The review included N.C. Baptist camps and conference centers, as well as Fruitland Baptist Bible College, which are all owned and operated by the state convention.

“The convention’s overall policies and procedures, I am pleased to report, are good, but they were in need of updating,” Unzicker said.

Photos by David Cook  Left, “‘On Mission Together’ is way more than a slogan. It’s more than a vision statement. It’s who we are as N.C. Baptists,” Todd Unzicker told messengers during his executive director-treasurer’s address at the 2022 Baptist State Convention of North Carolina annual meeting. Right, adopting an increased CP budget for 2023 totaling $29.5 million and approving a series of changes to the state convention’s articles and bylaws were among the business items that messengers attending the 2022 N.C. Baptist annual meeting took action on.

Unzicker said convention officials sought independent assistance from subject matter experts, outside counsel, abuse survivors and others during the course of the review. The review led to N.C. Baptists providing more resources and training to churches and associations, which included the launch of a web page with comprehensive abuse resources that is available at ncbaptist.org/abuse.

In his address to messengers during the meeting’s opening session, Unzicker shared stories and examples of how N.C. Baptists are demonstrating the event’s theme of being “On Mission Together.”

“‘On Mission Together’ is way more than a slogan,” Unzicker said. “It’s more than a vision statement. It’s who we are as N.C. Baptists.”

Unzicker said N.C. Baptists are strengthening opportunities for more churches to be sending churches. He highlighted the recently announced SendNC church planting partnership between the state convention and NAMB and the Go2Years initiative as ways churches can play an active role in planting churches and sending out missionaries in North Carolina, North America and around the world.

“The future belongs to churches that send,” Unzicker said.

“We are excited to come alongside North Carolina Baptists in this critical kingdom work of starting and planting churches,” Carter said, adding that every church can play a part in fulfilling the Great Commission by becoming a church that multiplies, mobilizes, raises up, supports and sends out church planters from their congregation into the harvest.

Mike Pittman, SendNC director for the state convention, said every church in North Carolina can be a sending church, a planting church or a parent church.

“We do this because the church is God’s ‘plan A’ for reaching North Carolina,” Pittman said.

Messengers also approved two separate measures that addressed a series of changes to the state convention’s articles and bylaws.

Messengers approved a motion to amend the convention’s articles of incorporation to provide greater clarity on what constitutes a church that is considered to be in “friendly cooperation” with the state convention. The approved amendment broadly defines a church that is in friendly cooperation with the state convention as “one that financially supports the Cooperative Program of the Convention” and has a “faith and practice that closely identifies with Baptist beliefs and distinctives.”

The measure also strengthened criteria by which a church may be deemed to not be in friendly cooperation with the convention. Those criteria include actions that affirm, endorse, promote or support the LGBTQ+ lifestyle, discriminatory behavior based on race or ethnicity, and behavior that is inconsistent with biblical teachings on sexual abuse.

Prior to passage of the amendment, the only provision pertaining to a church not being in friendly cooperation with the state convention was related to affirming homosexual behavior.

Messengers also approved a comprehensive revision to the state convention’s bylaws that streamlines some of the ways the convention conducts business by providing greater flexibility in scheduling the annual meeting, permitting the board and committees to meet virtually, and providing more flexibility in determining the structure and composition of the board and certain committees.

After messengers voted to consider bylaw revisions related to the executive director-treasurer search process in a separate measure, proposed changes to the search process did not pass.

The proposed recommendation related to the EDT search process would have allowed the N.C. Baptist board of directors to elect a new leader of the state convention, rather than the board merely recommending a candidate to be considered during an annual meeting or special called meeting of the convention.

Messengers also approved a recommendation from the N.C. Baptist board of directors for a change in the relationship between the state convention and N.C. Baptist Hospital.

Under terms of the measure, N.C. Baptist Hospital would no longer receive designated Cooperative Program funds, and the state convention would cease electing hospital trustees. The relationship change does not prohibit the convention and hospital from developing new avenues of collaboration in missions and ministry efforts in the future.

In his final presidential address to messengers, outgoing state convention President Micheal Pardue shared four necessities to serve the kingdom of God with the life and time we have on earth.

“He has given us this life for His glory,” Pardue said.

Messengers also heard messages from Derrick DeLain, lead pastor of Proclamation Church in Nashville, Tenn., and Mac Brunson, senior pastor of Valleydale Church in Birmingham, Ala., during the meeting.

During the event’s opening session, DeLain preached on engaging with one another as the family of God from Romans 12.

Brunson closed the meeting with a message on preparation for ministry from the life of David based on passages from 2 Samuel.

Next year’s N.C. Baptist annual meeting will return to the Koury Convention Center in Greensboro, N.C., on Nov. 6-7, 2023.

Paul Chitwood, president of the International Mission Board, will deliver the 2023 convention sermon, and the meeting will include a missionary commissioning service. 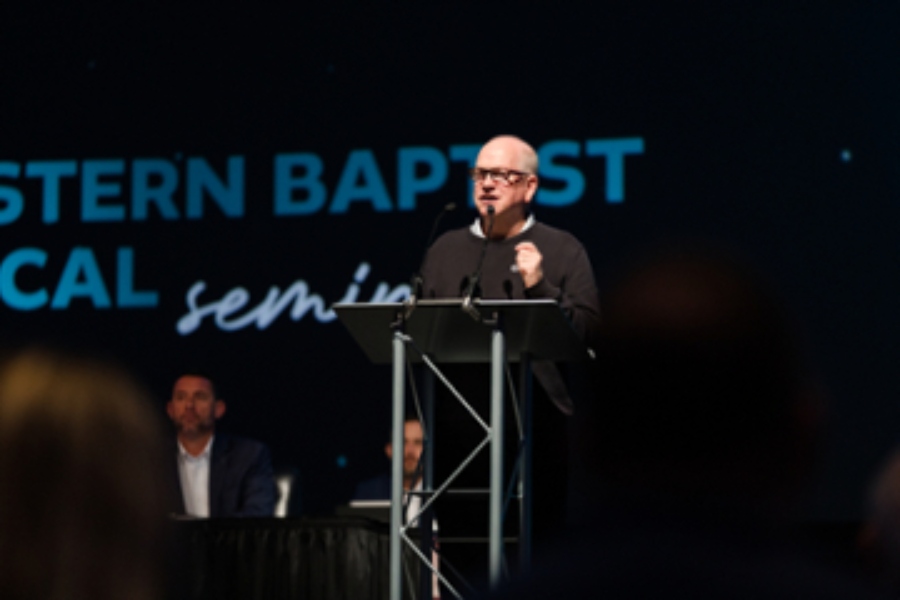 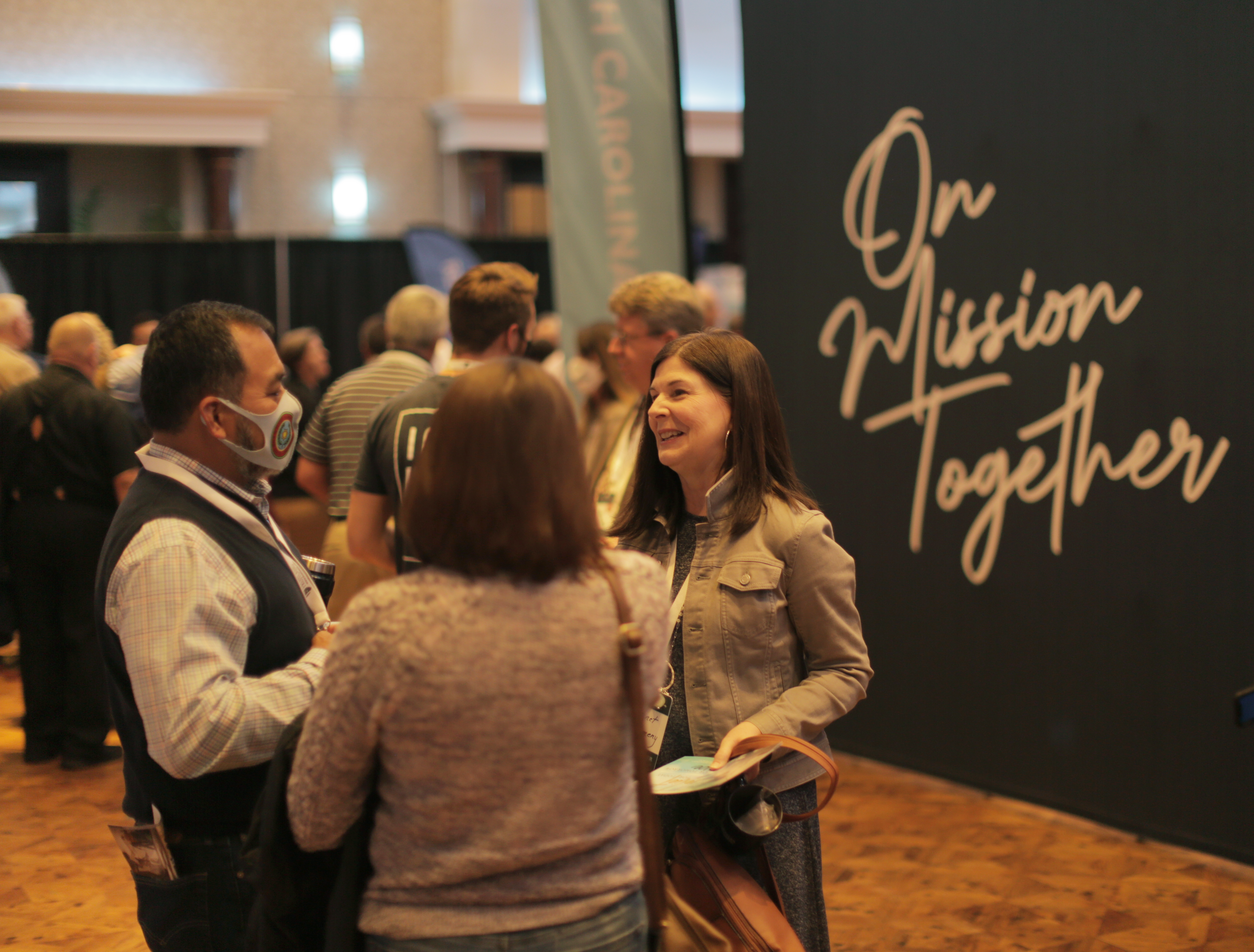 ‘On Mission Together:’ A theme worth repeating