Messengers resoundingly defeated a change to the Southern Baptist Convention (SBC) Business and Financial Plan proposed by the convention’s Executive Committee (EC). Critics said the proposal would have granted the EC too much authority and left the six SBC seminaries in trouble with accreditors.

The defeat was part of messengers’ mixed reception to a series of recommendations presented by the EC June 15 at the 2021 SBC annual meeting at Nashville’s Music City Center.

An amendment to the SBC Constitution listing racism and mishandling sexual abuse as grounds for disfellowshipping a church gained the second of two required approvals. A request from Lifeway Christian Resources to amend its Mission and Ministry Statement was defeated on a ballot vote after raised-hand and standing votes were too close to call.

Additionally, an attempt to amend the Cooperative Program (CP) Allocation Budget to cut funding from institutions advocating critical race theory (CRT) was ruled out of order.

The EC’s proposal to amend the SBC Business and Financial Plan came in response to a 2019 motion by former EC President Morris Chapman to “strengthen the fiscal accountability of SBC entities to the convention and to promote greater transparency regarding the use of Cooperative Program dollars.” Referred to the EC, Chapman’s motion eventuated the Business and Financial Plan revision. Criticism of the proposal in advance of this year’s annual meeting alleged it was an illegitimate attempt to expand the EC’s power.

On the convention floor, the proposal was defeated by a raised-hand vote after Southeastern Baptist Theological Seminary President Daniel Akin said the six SBC seminary presidents oppose it. The proposal, he said, would “jeopardize our standing with our accrediting agencies” because they worry about “outside interference with respect to funds.”

Among points at issue was a section in the proposal stating CP funds “may be escrowed” by the EC unless an “entity is operating in accordance with the convention’s expectations.”

Two other messengers, Jon Canler of Kentucky and Vance Pitman of Nevada, said the EC’s recommendation gave the committee too much authority at a time it is being investigated for allegedly mishandling sexual abuse.

Robyn Hari, chairman of the EC Convention Finance and Stewardship Development Committee, said the proposal sought to strike a balance between accountability and autonomy of the entities. As sentiment seemed to turn against the EC’s proposal, she stopped defending the recommendation and said, “We want to hear from the convention and the messengers.”

An amendment to Article III of the SBC Constitution added to the definition of a cooperating church that it “does not act in a manner inconsistent with the Convention’s beliefs regarding sexual abuse” and “does not act to affirm, approve, or endorse discriminatory behavior on the basis of ethnicity.”

The amendment took effect immediately, having received its first required messenger approval at the 2019 SBC annual meeting in Birmingham, Ala.

The convention already has disfellowshipped three churches for improper handling of sexual abuse (one in 2019 and two more this February) and one for racism in 2018. The newly adopted constitutional amendment does not grant the convention new powers to disfellowship churches. Rather, it makes explicit the types of behavior that make a church liable to exclusion from fellowship.

EC President and CEO Ronnie Floyd said the constitutional amendment reflects “our stand against all forms of racism against all people.” He also noted an increase of 7,992 non-Anglo congregations in the SBC since 1990.

“Of all people,” Floyd said, “Christians should love one another and be standing together against the sin of racism.”

The challenge to Lifeway’s proposed ministry statement revision arose when messenger Michael Schultz of Kentucky spoke against its adoption because the statement proposed deletion of Lifeway’s responsibility to “assist churches with Christian schools and home school ministries.”

“I am a father and increasingly distrust our public education system in the United States,” Schultz said, “and I think that there are a lot of other people with me in that. At this time in America’s history, I think it would be a mistake for the Southern Baptist Convention to step away from supporting homeschools.”

Messengers adopted a 2021-22 CP Allocation Budget of $190 million after an unsuccessful challenge by Florida pastor and Founders Ministries leader Tom Ascol over CRT. Ascol moved to amend the budget to withhold CP funds from “any institution, agency or entity that in any way supports, promotes or advocates any tenets of critical theory, critical race theory or intersectionality.”

Ascol spoke against an SBC resolution on CRT at the convention’s 2019 annual meeting in Birmingham and has been a vocal critic of alleged critical theory in the SBC ever since.

Greear said he is “no advocate of CRT,” but he ruled the motion out of order because it violates the SBC’s system of holding entities accountable through trustees. Also, “it would be impossible to administer” the proposal, he said. Ascol appealed Greear’s ruling, but messengers sustained the chair.

In other EC business, messengers:

Part 2 of the EC report Tuesday afternoon focused on Vision 2025, the EC’s plan for advancing the Great Commission through Southern Baptists over the next five years. 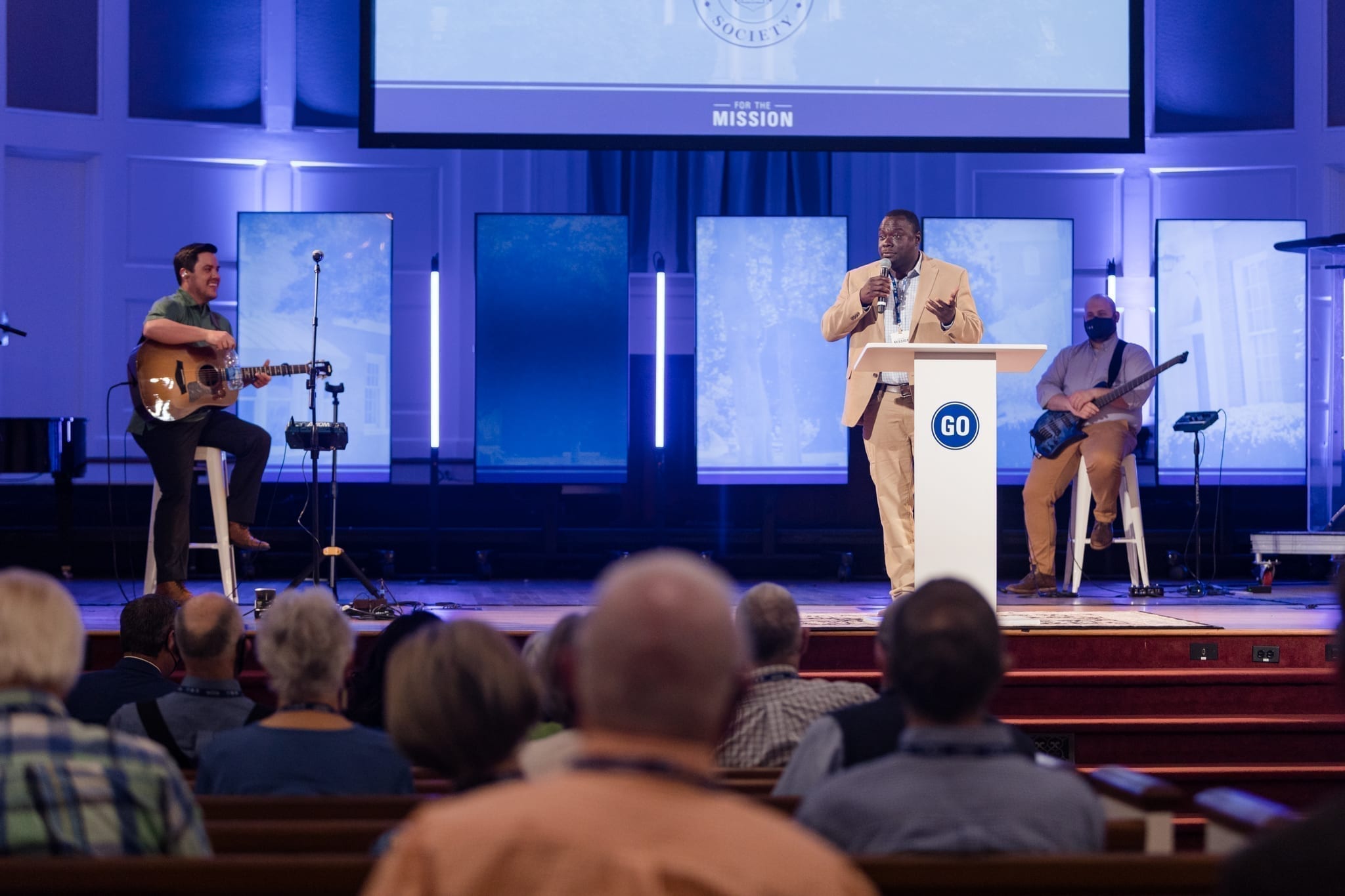