MBTS president Jason Allen announced that the seminary will begin a series of messages during upcoming graduation and convocation services focusing on specific doctrinal topics of urgency and relevance.

Two-hundred-five students were conferred 222 degrees and began their service as the next generation of pastors, missionaries and ministry leaders. With the school’s enrollment growth now surpassing 4,000 students, the number of graduates has also increased, up from 169 this time last year.

Midwestern Seminary also celebrated a milestone during the commencement ceremony, as 29 Spanish-speaking church planters earned their Church Planting Certificates. Two of those graduates also received their masters in theological studies with an emphasis on pastoral ministry.

Allen’s 10-part graduation/convocation sermon series will focus on topics such as the sufficiency of scripture, the exclusivity of the gospel, and penal substitutionary atonement. He began the series with a message from Jude entitled, “Truths Worth Contending For: Biblical Inerrancy.”

Allen acknowledged that commencement is an ideal setting to focus on the topic of inerrancy because it’s the “biggest, grandest stage that we have to offer, and our topic today, biblical inerrancy, merits such a stage.” He added that, as Southern Baptists, there is never a wrong time to reassert, cling to and contend for one of our central and foundational truths.

Among the graduates were roughly 40 women, including Susan K. Rainey, who was the 10,000th female student to complete theological education at Southwestern since its founding in 1908.

Reflecting on the milestone after commencement, SWBTS president Adam W. Greenway said, “The 10,000th female graduate is noteworthy because of what it demonstrates about Southwestern Seminary’s long-standing commitment to train women called by God to Christian service. Now, more than ever, we are resolved to offer the best and most comprehensive options for theological education to our sisters in Christ for their more faithful service to His church.”

Graduates of The Southern Baptist Theological Seminary are heralds of the good news of salvation through the forgiveness of sins, said R. Albert Mohler Jr., president the seminary in Louisville, Ky., at its 224th commencement exercises Dec. 13.

During the ceremony in the historic Alumni Memorial Chapel, 150 master’s and doctoral students were present to receive their degrees as members of a 208-person graduating class. These graduates are sent out as stewards of the knowledge of salvation into a world that desperately needs that knowledge, Mohler said in his commencement address.

“We are sending out these graduates to go out into the nations and out into the pulpits and into the churches, and to speak to everyone everywhere in order to communicate the knowledge of salvation,” Mohler said. “But it’s not just [a message of salvation that says], ‘This is good news; God loves you.’ That’s true, but it’s infinitely better than that. [The message is] that ‘you are a sinner, but God shows His mercy to you in Christ in whom your sins can be forgiven.'”

His mission, Mohler said, is similar to the one passed down to ministers of the gospel today.

“Why are we happy about these graduates? What gives us such joy on this occasion? It’s because what was here assigned to John is what, by the call of God, is now assigned to them. They are to give knowledge of salvation to God’s people in the forgiveness of their sins,” Mohler said.

The award is named after the Baggott family, who established a fund in 1980 to recognize an outstanding graduate of each graduating class.

The recipient is voted on by the members of the graduating class based on outstanding leadership, exemplary character and sound scholarship.

Friends and family gathered together to celebrate the conferring of degrees upon 251 Southeastern Baptist Theological Seminary (SEBTS) and College at Southeastern graduates Dec. 13.

SEBTS president Danny Akin exhorted graduates to consider how Christ’s humble sacrifice on their behalf compels them to give sacrificially as seen in 2 Corinthians 8:9.

Akin gave three charges for every graduate to consider based upon Paul’s statement in 2 Corinthians.

First, know the grace of Jesus. Akin built upon Paul’s statement to the Corinthians that they know Jesus. He explained that Christians are given the gift of knowing and experiencing the life-changing power of Jesus’ death and resurrection.

“This is something that we know as a deep, abiding, personal knowledge,” Akin said.

Second, remember Christ’s humble, atoning sacrifice. Akin explained that Jesus gave up all of the honor He had in heaven and humbled Himself to a cross so that mankind could be justified before God and one day stand righteous in His presence.

Jamie Dew, presiding over his first graduation ceremony as president of New Orleans Baptist Theological Seminary (NOBTS) and Leavell College, congratulated graduate candidates at a packed house at Leavell Chapel and then asked a probing question.

“To what end?” Dew asked. “Why has God blessed you? What is this for?”

Dew explained that God had blessed and sustained graduate candidates through countless hours of study and sacrifices to pursue the degree.

Graduation is a reason to celebrate, Dew explained, but he pressed candidates further to consider if they now hoped the degree would bring opportunity, a new platform and a name for themselves.

God will bring new opportunities, Dew assured listeners, but each will be temporary.

“A day is coming when your name will be forgotten,” Dew reminded them. “So why labor for something that doesn’t matter or count for all eternity? With that in mind, we now send you out as graduates of this institution into the harvest of our Lord. We send you now to go, in His name, to build His kingdom.”

Making every moment count is a lesson that has stayed with him, Dew explained, and he urged graduate candidates to remember the same.

Dew closed with the gospel message and, drawing from John 3:16, urged attendees unfamiliar with its meaning to consider God’s love. Dew said, “This day as we celebrate Christ and we celebrate our graduates, I urge you if you do not know Jesus Christ, make today the day that you meet Him.”

Before the conferral of degrees, provost Norris Grubbs pointed to 1 Thessalonians 5:23-24 to remind candidates that God is faithful and will be with them.

“You must always keep learning,” Grubbs told the candidates. “Our prayer is that you will serve God’s people as you walk with Christ, proclaim His truth, and fulfill His mission.”

Gateway Seminary conferred 42 diplomas, master’s and doctoral degrees Dec. 14 on students from nine states and three countries. President Jeff Iorg noted the graduates would join more than 9,600 alumni who had received degrees over the seminary’s 75 years of ministry.

Commencement exercises were held in the chapel of the seminary’s main campus in Ontario, Calif.

Iorg challenged graduates to follow Christ as the magi did, with endurance and submission.

“Following the Lord is the essence of Christian leadership,” he said. “If you follow the Lord, you must endure when circumstances are baffling, when time moves slowly and when opponents are threatening you.”

He recalled the story from Matthew 2:1-12, when the wise men, also called the magi, modeled what it meant to follow Christ.

“They encountered unusual circumstances, the guiding star,” he said. “The magi overcame geographic and time obstacles and arrived at the place where Jesus could be worshiped. They confronted a powerful enemy while following the Lord. Herod had slaughtered every male child under the age of two.”

Iorg said the magi followed the star, not knowing where it would lead, and they worshiped Jesus when they finally found Him.

“Here’s Jesus, not an infant any longer but certainly a toddler, and they fell to their knees to worship Him. These were prominent, well-known men, and they were on their knees in front of a baby, giving gifts.”

Iorg likened the magi’s experience to that of those called to ministry.

“Submission means following God’s direction, not always knowing where He will lead or what will happen when you get there,” he said. “Submission is demonstrated and reinforced through worship. Privately and publicly, I worship and in my worship, I demonstrate submission.”

(EDITOR’S NOTE: The mission of the seminaries of the Southern Baptist Convention is to prepare God-called men and women for vocational service in Baptist churches and in other Christian ministries throughout the world through programs of spiritual development, theological studies and practical preparation in ministry.) 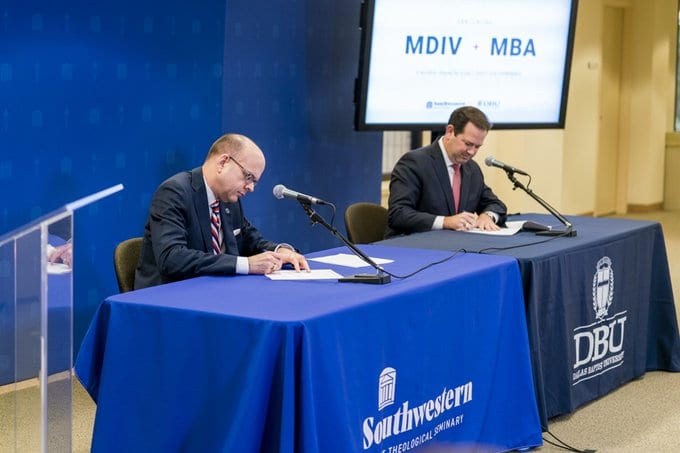 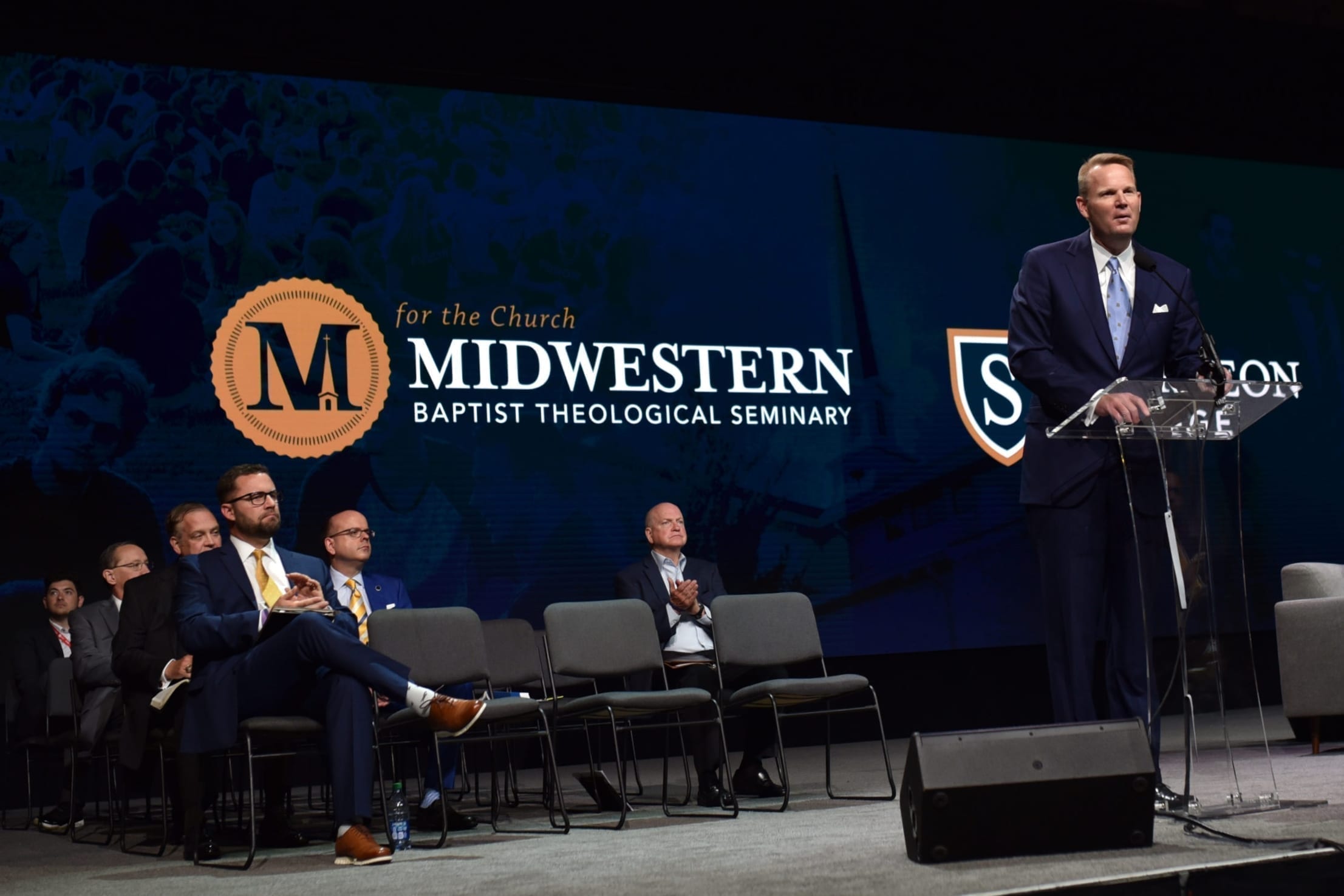